Mobile but not moving: Parkhill provides a new model for low-income communities. 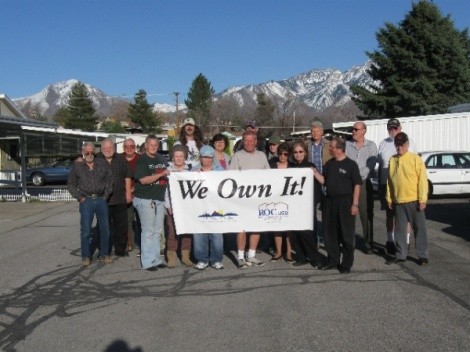 Just because it’s a mobile home doesn’t mean the people inside want to move out. Especially the residents of Parkhill Homeowners Cooperative Association—which, before it recently became Utah’s first resident-owned cooperative, was just another mobile-home park where residents lived under the threat of its third-party owners selling the land, bulldozing the homes too old to move and kicking residents to the curb.

On April 9, inside a clubhouse on the lot that once served as a laundry room, jubilant members of the association crowded together to celebrate amid a spring blizzard raging outside. They weren’t the only ones celebrating, as low-income advocates also lauded the association’s accomplishment as being perhaps a new model for low-income communities that support independent and dignified living by betting on residents who are willing to improve the communities they fully own.

Parkhill members are indeed dedicated, especially after having battled for their property since 2004, when a developer acquired the property and immediately jacked rent up from $300 to $500. Robbins, a resident of Parkhill since 1987, remembers attending the meeting where another resident told the owner that they could not afford the increased rent on a fixed income. “[The owner] said ‘exactly,’ ” Robbins recalls.

The callous attempt to sweep out the 30 residents caught the attention of the Community Action Program, which helped lobby the Salt Lake County Council to place a moratorium on the owner’s development plans. That effort eventually led to the Housing Authority purchasing Parkhill with a loan from Fannie Mae and receiving financial assistance from the Salt Lake County Department of Community and Economic Development.

Minnie Yardley, the current Parkhill board treasurer, who lives on a fixed income as she’s unable to work because of a debilitating car-wreck injury, fiercely fought every effort made to sweep the residents out of Parkhill. Even when the housing authority purchased the property in 2005, Yardley and others knew it was too soon to declare victory.

“We would love to own this park,” Yardley remembers telling CAP housing advocates. “It was a dream for all of us to own it and never have to have this fear again.”

Now, six years later, the residents have finally achieved that dream—but it wasn’t easy. Bob Greer, Parkhill resident and current board president, knew just how hard it could be for residents to own their own property. The idea had even surfaced at his former mobile-home park, the Meadowbrooks, in Cottonwood Heights. Advocates had worked with the local government there that also tried to support a similar endeavor, but because of the size of that site—it held 150 mobile homes—residents couldn’t gather the financing to save it. Soon after residents of the 150 homes had been displaced, including Greer and his wife, the housing market tanked. Now, on the land once slated for luxury-home development, only one house has been built.

A refugee from Meadowbrooks, Greer landed at Parkhill and threw himself into working on the cooperative idea. “It helped inspire us,” Greer says. “We came here and got behind everyone.”

Incorporating as a dues-paying nonprofit in 2008, the association gained the framework for the official cooperative. Greer, a retired vice president of a mechanics’ union in California, says he and others had some insight on running boards. “Plus, we had a book,” he says with a laugh. But he and the rest admit their biggest advantage was Mark Lundgren, the technical advisor from Utah Residential Owned Communities, a nonprofit affiliate of a nationwide group that since 2008 has lined up financing for resident-owned communities.

Lundgren says that commercial banks will offer loans for up to 70 percent of the purchase price, requiring a down payment for the remainder. But with the roughly $1 million price tag on the Parkhill property, it takes special financing to find lenders willing to cover the remaining 30 percent. After Lundgren helped set up various funding sources, residents now simply pay membership dues of $60 per year on the property. The financing, Lundgren says, is far from charity, but rather is an investment buttressed by the dedicated community members at Parkhill.

“[Lenders] see the value and security of the community being run by the people who live there,” Lundgren says. “They’ve invested in and purchased their homes, improved their yards and homesites, done landscaping—they’ve invested their lives in it.”