The ins and outs of sex in Utah. 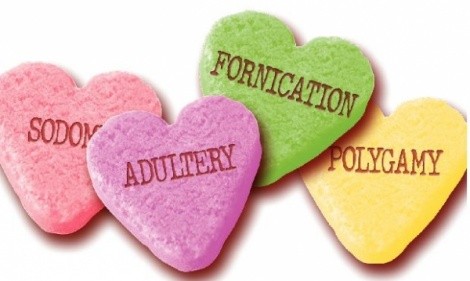 In Utah, you or someone you know might be practicing polygamists and not even know it.

Assume that a married couple decides to call it quits but holds off from immediately divorcing for financial reasons, health-care benefits or for the sake of their children. If one of the couple takes up with a new lover, he or she could be charged with a third-degree felony under Utah’s bigamy statute, serve up to five years in prison and pay up to $5,000 in fines.

So says Utah’s civil-rights attorney Brian Barnard. And while the well-known First Amendment defender operates a divorce clinic in Salt Lake City, he’s not calling for more dissolution, but rather a look at antiquated laws.

Barnard also notes that unmarried oral-sex aficionados in Utah could face up to six months in jail and $1,000 in fines for “engag[ing] in any sexual act with a person ... involving the genitals of one person and mouth or anus of another person, regardless of the sex of either participant,” as stated in the statute forbidding consensual sodomy. The same theoretical punishment applies to those having consensual sexual relationships before marriage. That’s right: The law says no fornicatin’ until you’re married.

Forty years ago, every state in the Union outlawed fornication and sodomy. Now, only 10 states maintain the statutes, Utah among them.

“It remains on the books as a statement by the Legislature,” Barnard wrote in an e-mail to City Weekly. “Utah legislators would be unwilling to publicly vote to repeal the statute.” The “statement,” he says, is the Legislature’s way of saying that it disapproves of sex outside of traditional marriage, and they want everyone to know.

That’s not to say police are aggressively pursuing marriage outlaws. Alicia Cook, a prosecutor with the Salt Lake County District Attorney’s office since 2001, says, “Personally, I have never prosecuted [fornication or sodomy] and I’m not aware of our department ever investigating it. No one is pressing for those charges.” She also acknowledges that people have a right to privacy and prosecutors will work within the limitations of the law spelled out by the U.S. Supreme Court.

The following day, the pair argued about the sex and eventually Houston asked the woman to turn him in. When she wouldn’t, he stopped his car in the middle of an intersection, broke into a pet store and called the police to turn himself in.

Ultimately, the woman filed charges, and he later was acquitted of rape and forcible sodomy. However, the jury found him guilty of the lesser offenses of fornication and sodomy.

For those who think more is better, know that the District Attorney´s Office might be more inclined to prosecute bigamy cases in spite of how challenging they can be to gain conviction. While there is no policy to prosecute, Cook says the district attorney most likely would do so, but she doesn’t know of anyone who has been criminally charged with bigamy.

Adultery is another crime you can be charged with in Utah. Barnard says it used to be illegal in all 50 states; now only about 20 keep it on the books. “I’m not aware of any adultery cases [in Salt Lake County],” Cook says.

However, in 1996, Lorenzo Spencer sued Michael Neilson, a man who fathered twins with Spencer’s wife in extramarital affair, for alienation of affections. The civil case took 10 years and cost Neilson tens of thousands of dollars in legal fees and lost wages. The bottom line: When these cases do occur, the legal battle can be lengthy and expensive.

Even though many sex crimes are worked out in plea bargains, the fact that the state regulates and criminalizes sexual conduct between consenting adults outrages Barnard.

He wants the state out of people’s intimate affairs, those that are private and not in exchange for money. “The state must not dictate who can do what with which to whom,” he argues.

In 2007, former Sen. Scott McCoy, D-Salt Lake City, sponsored a bill to decriminalize sodomy for adults. The bill never got out of the Senate Rules Committee. Republican Senate leaders made it clear they did not want to make sodomy legal in Utah at the time, and during the 2010 session they agreed to a moratorium on any bills relating to gay rights—which includes sodomy laws.

McCoy says that despite that public stance, he did receive support, in private, for changing the law in 2007 from “conservative” legislators. However, they also told him that for a conservative in Utah to run the bill would be politically unwise, and that McCoy, as an openly gay senator, could not pass it. Thus, it is doubtful that the law will be changed any time soon.

But if the Legislature isn’t going to do anything, how can such laws be put out to pasture? The answer:

A Utah court must formally determine the laws to be unconstitutional. But because the laws aren’t being enforced, the opportunity to challenge their constitutionality has not yet presented itself, Barnard says.

He’s looking for a test case to challenge those laws, however.

His & Her Adult Gift Guide