(Un) Natural Disaster: Preventing the next refinery blast that could rock Utah. 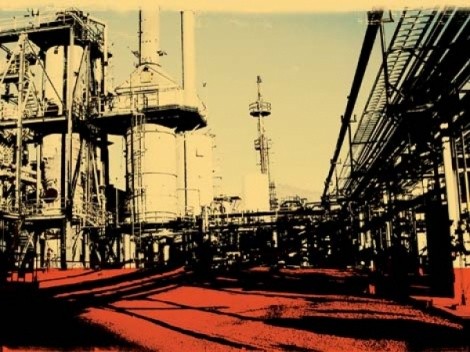 One loud explosion knocked pictures off Judy Averett´s walls. When she ran outside her Woods Cross home on Nov. 4, 2009, she saw black clouds rising from the ground directly in front of her, to the south and to the north. “I saw smoke from Flying J to Silver Eagle to Holly,” Averett says, listing the oil refineries that surround her neighborhood.

Linda Wood wasn’t in her home during the explosion that mostly destroyed it, but Rusty, her beagle mutt, and Rosy, a basset-dachshund mix, rode out the blast in the Wood home — just 500 feet from the source. When they were found together later that day several blocks from the epicenter, Wood says, “I started petting Rusty and broken glass came out of his hair.”


Rusty and Rosy survived the ordeal, a 100-foot flame ball and explosion reverberating as far away as Layton. In Wood´s house, the shock wave knocked kitchen cupboards off the walls, spilling their contents; it blew out all the windows and doors; it slammed the house off its foundation; it jarred the attic slightly askew; and it broke a toilet upstairs, flooding the floors below. At other nearby homes, curbs and foundations cracked and nails were sucked out of the wall. All that, in a flash.

Miraculously, the 9:15 a.m. explosion that damaged hundreds of homes didn´t injure a soul, not even workers. An insurance company is handling 271 claims from surrounding homeowners, including one bill for a dog with hearing loss. The source of the explosion was Silver Eagle Refinery, where according to official preliminary reports, a 10-inch hydrogen pipe failed, releasing the highly flammable gas, which then exploded with bomblike force. It created a power outage that knocked the other refineries offline, forcing an emergency burn-off from their flares, fueling those usually small flickers into giant flames spewing polluted smog into the air visible for several hours after the explosion.


This was the first refinery explosion in Utah to damage property and endanger people outside the refinery gates, but neighbors worry it won’t be the last.


Silver Eagle has not challenged preliminary findings of the blast´s cause.

In the past 10 years, Utah’s five refineries themselves — as required by various environmental laws or other interested parties — have reported fires, explosions, chemical releases and spills, both large and small, on average once every nine days, according to reports maintained by Utah Department of Environmental Quality (For all 430 reports of incidents at Utah's five refineries made to the Utah Department of Environmental Quality over the last 10 years, download the Incident Report XLS Spreadsheet).


Some Woods Cross residents blame the city for allowing their neighborhood to be built so close to Silver Eagle. Others blame Utah Occupational Safety & Health (UOSH, but often referred to as OSHA) for being weak and ineffectual. Still, others blame refinery operators for chasing profits at the expense of safety, while a few feel exasperated by all those entities, none of which can say with certainty if any inspecting agency is currently capable and responsible for ensuring pipe integrity, and which one will ensure pipe safety in the future. Most say UOSH should inspect pipe thickness and integrity, but a UOSH manager tells City Weekly that’s not its responsibility.

Woods Cross resident Alison Pickett, who started the Facebook group “WX Blast Zone” hopes her neighborhood can spur change. “We, as taxpaying citizens, have to become so much more aware because we have a feeling that we’re paying taxes and people are watching out for us, but this is the perfect example of how that’s not happening.”

Like all U.S. refineries, Utah’s facilities are aging. The last U.S. refinery to be built was constructed in 1976, while all of Utah’s refineries were built prior to 1950. A new refinery today might require about $2 billion in start-up capital, industry sources have told City Weekly.

Utah’s five refineries are located in Davis and northern Salt Lake counties. Mapped from north to south, the refineries are operated by Holly, Silver Eagle, Flying J, Chevron and Tesoro. At 58,000 barrels per day, Tesoro is Utah’s largest refinery, though it is smaller than 94 other refineries in the country. Utah’s smallest, Silver Eagle, at 10,250 barrels per day, is ranked 130 out 143 refineries nationwide in terms of capacity, according to the U.S. Energy Information Administration.

For the past decade, Utah refineries have been in flux, installing new units to comply with stricter air quality requirements and upgrading facilities to increase capacity. According to the Utah Division of Air Quality, Utah’s five refineries have been granted 76 new permits since 2000. Additionally, three refineries have changed ownership in that time: the British Petroleum refinery became Tesoro, Inland Refining became Silver Eagle, and Phillips 66 became Holly.

While the number of UOSH inspections have decreased in the past five years, the number of fires and explosions has increased. Between 2000 and 2004, UOSH inspected the refineries 13 times, and only two incidents were large enough to gather news attention: Tesoro exploded as a result of a power outage on Feb. 24, 2002, the final day of the Olympics, and an asphalt tank exploded and burned at Silver Eagle on May 23, 2003.

But between 2005 and the end of 2009, UOSH conducted only three inspections at the refineries even though nine incidents gathered news media attention. Those included a Jan. 12, 2009, explosion at Silver Eagle that injured four workers and prompted an evacuation of the neighborhood. Almost all of the major fires and explosions in recent years have been at three refineries: Silver Eagle, Tesoro and Holly.

“[Silver Eagle] basically had a fire there once per year while we lived there [from 2003 until November 2009],” Linda Wood says. Husband Bill Wood adds, “With each fire, the neighborhood got angrier and angrier.”

Union workers at neighboring refineries were getting frustrated, too. Silver Eagle is the only Utah refinery without an organized work force.

In January 2009, Utah’s United Steelworkers members walked picket lines during contract negotiations with the refiners, as did Steelworkers across the country. The usual wage increases and benefits were at issue, but the workers were also demanding safer working conditions. Julie Holzer is a staff representative for 425 of Utah’s organized refinery workers, roughly half the total. She complains that the refineries’ prescheduled shutdowns for internal safety and maintenance inspections represent some of the best and worst aspects of refinery safety. Workers and management who actually work in the facility are absolutely devoted to safe operations and are qualified to keep the facilities safe, she says, but mind-numbing overtime is frequently part of the internal inspections because the operators lose profits while the facility is not in production. “Overtime is now the norm,” she says, “much of it forced.”

In 2010, it makes very little sense for the refineries to be located at the center of the Wasatch Front, Utah’s urban core. But the refineries are so old, their locations used to be the outskirts of Salt Lake City on the way to the lush farmland of Davis County. In the decades since they were built, however, suburban development has surrounded the facilities, and the once-open lands are now developed cities like Woods Cross, North Salt Lake and West Bountiful. 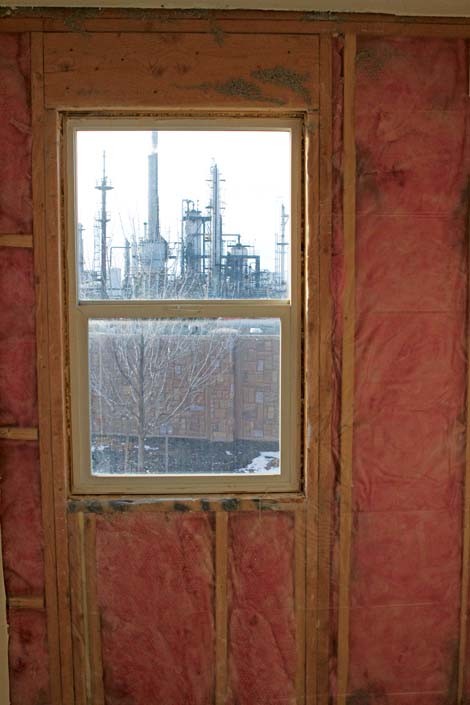 An oft-repeated chorus line from the local industry is that they were there first. That assertion, while correct, might imply the residents should have known what they were getting into, and it also speaks to the refiners’ predicament. The refineries, after all, cannot move. They are cemented to their current lots by economic forces.

Many residents, on the other hand, say that nobody warned them about the risks, especially explosions.

Until six years ago, Judy Averett’s property was bordered on the west by an open field about two blocks wide between her home on 800 West and Silver Eagle. After so many decades of no explosions or fires—at least none memorable—she says it seemed natural for those two blocks of grassy field to become a subdivision. “I think the refinery should have thought a little more ahead if there is something like a blast zone,” she says. “We never heard that in the 43 years we lived here.”

But now, two of her daughters live with their families closer to Silver Eagle than she does. 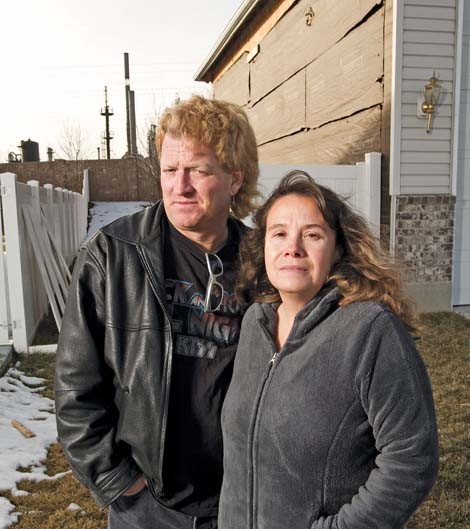 Averett isn’t alone. Bill and Linda Wood don’t think they got an exceptionally great deal on their 2,800 square-foot home when they built it six years ago, although their equal-price lot was larger than the others in the subdivision. They enjoy loud music and thought the refinery would be a good neighbor; one less person to complain about their own noise. There’s even a small park next door where 8-year-old daughter Kassadee can play.

All that stands between the Woods’ home and Silver Eagle is a railroad track, a 10-foot wall and a couple hundred feet. “It would have concerned me more if I knew that was a blast wall,” she says. “That might have caused me to pause [before purchasing it]. We thought it was a sound wall for the train.” The wall would have especially concerned her because it’s only half the height of the Woods´ two-story home. On the day of the explosion, the Woods were forced to move out all their possessions. “They gave us until tonight to get out,” she said that day, as neighbors and fellow members of the Latter-day Saints 5th Ward helped them. “They said a strong wind could take the top off.”

Gordon Curl declined to say what he paid for his home but admitted it was a screaming deal. “For south Davis County, it was the cheapest you could buy,” he says. Like so many others, Curl suspects the city may have failed in its duty to zone the neighborhood appropriately. “I think the city is still in the CYA [cover-your-ass] mode.”

Woods Cross City Manager Gary Uresk says the new subdivision between Silver Eagle and 800 West was rezoned in 1981. If the city undertook any due diligence before rezoning the property, the reports have been lost to the ages, he says. By the time developer Marvin Blosch bought the property and wanted to develop it about 20 years later, the city was in a tough spot.

While considering building permits for houses that were just hundreds of feet from Silver Eagle, Uresk says the city requested a report from Salt Lake City-based Redd Engineering regarding potential risk and hazards. That firm cited U.S. Housing & Urban Development lending standards, which would have not funded about 30 of the homes built closest to Silver Eagle. But the developer commissioned his own report, Uresk says, that cited standard building and fire codes that were more permissive. To avoid any risk of a lawsuit, Uresk says, the city had to approve the permits.

“The challenge is what was allowed by law was unsafe,” Lowry Redd, of Redd Engineering told the Woods Cross City Council on Jan. 5. His comments were in response to neighbor Curl, who’d asked in terse tones whether the Redd report had properly computed the blast zone. Redd admitted, “We did not analyze the refinery to look at concussion or blast zone.”


Why would that be? Redd told City Weekly, “I think the issues of [the city’s] legal jurisdiction overrode their interest in risk analysis. They got the answer that it wasn’t against the law [to build homes so close to a refinery], and that told them they didn’t have a right to stop the developer.”