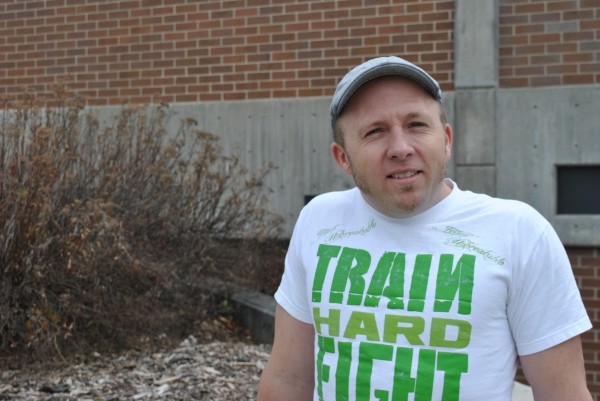 After the death of his mother in 2011, Utah Valley University student Wade Haskell joined the Heart & Soul suicide support group. After experiencing the power of the group, Haskell realized that college students could benefit from a group of their own and started a suicide support group on campus. Breathe: Suicide Survivors Support Group meets on the last Tuesday of every month at 6 p.m., in Room 222 of UVU’s Sorensen Center.

Why did you start this group?
My mom took her life in July. It was a shock. I immediately looked for a support group for me and my family, and began attending. I felt it was really helpful to meet with people who’ve also experienced that loss. Losing someone to suicide is different than having someone die naturally, or having them die in a car accident or something that was unexpected. Not only did you lose them, but you lost them because they wanted to go, they wanted to die. It’s a unique pain, so having a support group where you meet with people who’ve experienced that really specific pain … it’s comforting, it’s inspirational, and you feel that for two hours a month, you’re perfectly understood in your grief.

I felt like it’d be great if I could have that once a month, and I thought, “I’m here on a campus with more than 30,000 students; I’m sure I’m not alone in my experience,” so I decided to start a group here at UVU and see if a need could be filled.

The thing I like about these groups is the inspiration I get. It’s easy to feel like maybe giving up yourself, or life just got too hard, so maybe I’ll just quit trying. But the thing about the groups is you see people who’ve lost just as much as you have—sometimes more—and they still have the will to go on. That’s just inspiring to me. Yeah, life just got harder, life just changed for you forever, but it doesn’t mean it has to stop—it can continue on, and even in a beautiful way.

Why is it beneficial for college students to have their own support group?
As a student, you’re dealing with all of the stresses that come with school, and on top of that, you have this horrible loss in your life, this trauma. It’s really difficult. It’s important to have a group on campus where all the students who are dealing with those things at the same time can come and be understood.
This group is made up only of people who’ve lost people to suicide. We meet in the Health & Wellness Center, so there are therapists in the building during the time that we meet in case they are ever needed, but I don’t have any professionals, any therapists in here. I don’t want people to feel they’re being analyzed. I want them to come in and feel like they can say whatever they want. I have a couple of people who go to both Heart & Soul and to Breathe, like I do. They go there with some family members, and they come here because there are some things they don’t dare say in front of their family members that they can say here.

Why are people who’ve lost someone to suicide called survivors?
I don’t know, and I’m trying to come up with some different way to word the name of my group. When I word it “Suicide Survivors Support Group,” people sometimes assume it’s for people who’ve attempted suicide and survived it. But there is some good meaning to “survivors.” Suicide is something that can run in a family. Usually, suicide is associated with mental illness. And that can run in a family. For instance, my mother suffered from depression and anxiety for more than half her life, and I can see that some of my other family share that. When one person in a family takes their life, the other people who were already suffering can see that first suicide as permission to take their life as well. So you really have to watch them. That makes those of us who are proactive and really trying to continue on, that sort of makes us survivors.

How is the grief of suicide survivors different?
It is hard to define what that uniqueness is, other than there’s a lot of guilt associated with suicide. Maybe I wasn’t a good enough friend, a good enough spouse. In my case, maybe I should have been a better son. Maybe I didn’t love them enough; if I’d done this or I hadn’t done this, they’d still be here, they wouldn’t have taken their life. And there’s no closure.


If I talk about losing my mom the way that I did to someone who hasn’t gone through it, it makes me feel a little bit under the microscope. I know that nobody’s intending judgment, but I feel like I’m being assessed by someone who doesn’t understand. With this support group, you’re telling your story and getting inspiration and help, to and from people who get it.


You’re all on the same level; you all share that common bond. The first time I sat in on Charn [Burton’s Heart and Soul Suicide Support Group] group, it was bizarre. I didn’t know any of them, but I felt familiar with all of them—every one of them felt like someone I knew somehow. But I didn’t. I don’t know if it changes our countenance, but there’s a real bond there, and a trust.

Does the group help with your guilt?
My dad only came to the other group once, but he shared a story about a time that he was suicidal. His wasn’t depressed; his was some effects from narcotics that he’d been prescribed after a shoulder surgery. He talked about it making him feel suicidal to the point that he planned it out what he was going to do. Luckily, he snapped out of it and said, “I’ve gotta get up out of this chair; I’ve got to get out of this house or I’m gonna really do this.” He described what that felt like to him, and that he can see that most people who get to that place, that very dark place of wanting to take their own life, they don’t see the big picture. They have tunnel vision, and the only thing they see at the end of that tunnel is that they have to take their life. It’s the only way out of this darkness that they’re in. It’s not even like it’s a choice. Him describing that helped a lot of people who’ve lost people to see that as much as you loved them, as much as you would hate for them to hurt themselves, they weren’t able to see that. I’ve had a couple of people who’ve come up to me and said that really helped them with their guilt. Most of the time, there’s really nothing we can do. If someone gets to that place in their life where they’ve determined that that’s the only choice that they have, there’s not a lot that can be done, so it’s not fair to put that guilt on yourself. Even though you hear that, you still go through it, but it makes it easier to hear other people’s stories.

Is it difficult for some people to feel comfortable sharing their grief with a group of strangers?
Death is such an uncomfortable topic, and add on top of that suicide … it’s natural for some people to compartmentalize this—“I’ll just put this away; I’m fine. I don’t need professional help; I don’t want to deal with it.” I wish that we could change the stigma that gets placed upon almost anything having to do with mental health. Like going to a therapist—some people still look at that like going to a shrink—“Only crazy people do that, and I’m not crazy.” And the other thing is that while this works really, really well for me and for a lot of people, I do realize that there’s more than one way to heal, and everyone has to do it their own way, and some people’s struggle might be harder and longer. But I feel really positively that these groups will help walk someone through the grieving process, give them a lot of support, and help them understand what they’re going through and maybe what’s to come. Seeing someone who’s three years removed from their tragedy, they can tell someone who’s just starting, “Well, this is what you might experience.”

Utah’s the No. 1 state for people contemplating suicide. What would you say to someone who is?
If someone were to come to me and say they were having thoughts of suicide, I would direct them to someone that could help them—a therapist, a psychologist—and just be there for them. But I think we need to get to the root of the problem, get to them before they start being suicidal. I’m a biology major, and I’m planning on being a physician’s assistant. One thing I’d really like to transform in medicine is when someone goes in for a physical, also take a look at what’s going on in their head. Why is it only important what’s going on in our body? Why isn’t it as important—or maybe more so—to keep our minds healthy? If we can take the stigma away from therapists and support groups and just pay attention to what’s going on in our minds, we can probably eliminate a lot of these cases where people get to that dark place.