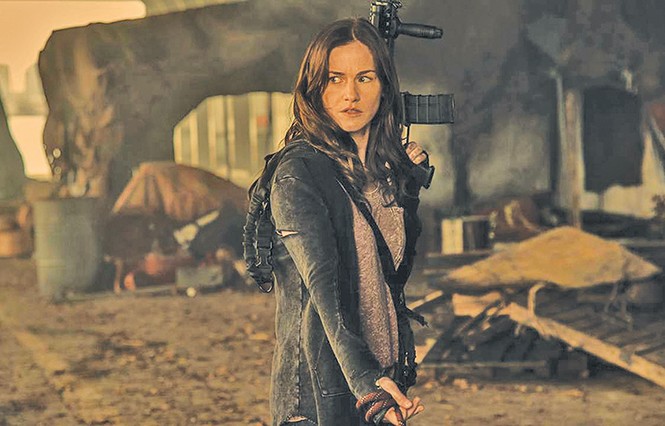 Now that The Strain is over, TV only has one vampire apocalypse show, Van Helsing (Season 2 premiere, Thursday, Oct. 5, Syfy), and it's finally stepping up to the challenge. In Season 1, Vanessa Van Helsing (Kelly Overton) spent time wandering underground and losing colleagues—saved Canadian dollars on locations and co-stars, apparently—in a slow buildup to the vamp beatdown. Series creator/writer Neil LaBute's—yes, that Neil LaBute—glacial approach was unusual for a Syfy and Overton more than delivered on the human drama and (occasional) vampire-slayer action. Now, the bigger/bloodier battle to take back the world really begins; come back if you got bored and bailed.

No, it's not a reality show about haunted storage units—Ghost Wars (series debut, Thursday, Oct. 5, Syfy) is about malicious paranormal forces taking over a remote town in the remotest of states, Alaska. Anything set in The Last Frontier is automatically 10 times spookier, and Ghost Wars could be a potential challenger to Syfy's creepiest anthology series, Channel Zero, at least in star power: Vincent D'Onofrio (Daredevil), Kim Coates (Sons of Anarchy), Kandyse McClure (Battlestar Galactica) and Meatloaf (!) occupy various quadrants of science, religion, skepticism and psychic ability. Another impressive new Syfy entry—a couple of years ago, this would have been about haunted storage units.

What happens when the young daughter of Jane Sadler (Kyra Sedgwick), the producer/writer of a fact-based police drama, goes missing and she has to deal with the real cops? D-R-A-M-A, that's what! Ten Days in the Valley (new series, Sundays, ABC) isn't much different from other crime procedurals—especially not ABC's defunct Secrets & Lies—but at least deserves points for letting Sedgwick be a shady, barely sympathetic character with a tenuous grasp on the truth and her own drug problem. Whether it holds up over 10 episodes (as 10 days, get it?) or not remains to be seen; right now, it's mostly coming off as a network knockoff of HBO's Big Little Lies, which was no great shakes itself. Yeah, I said it.

O.M. Gawd! Who could have predicted that Riverdale (Season 2 premiere, Wednesday, Oct. 11, The CW) would blow up when it debuted back in January? I mean, besides me? (I'm on the right side of history here.) The Archie Comics-via-camp-noir teen drama squeezed a whole lotta crazy into its initial 13 hours, culminating in a hysterical maple-syrup/drug-trafficking reveal and the possible murder of Archie's dad, Fred (Luke Perry). What's next for Archie (K.J. Apa), Jughead (Cole Sprouse), Betty (Lili Reinhart) and Veronica (Camila Mendes)? Between sexy times, the gang will be tracking a new town threat known as "Sugar Man," True Detective-style. I'm just a wee bit too excited for this.

On the other hand, I have zero fucks to give about Dynasty (series debut, Wednesday, Oct. 11, The CW), a needless reboot of the big-haired super-soap that ruled the '80s. Why not revive a lesser-known show, like the amazing 1985 series Street Hawk, which was pretty much just Knight Rider on a motorcycle, or the 1987 cult crime classic Wiseguy, which presaged TV's current incest-is-best craze by 30 years? Or, hell, Square Pegs? Anyway: Dynasty is still about clashing Atlanta families the Colbys and the Carringtons, both rich, both beautiful, both overflowing with White People Problems—come on, read the room/country, CW. If ever there were a time for petulant TV billionaires, this ain't it.

Season 2 weeded out the casual observers quickly, but USA is sticking by its breakthrough "prestige series" Mr. Robot (Season 3 premiere, Wednesday, Oct. 11, USA). With Elliot (Rami Malek) laid up after being gunned down, is Darlene (Carly Chaikin) about to feel the wrath of the Dark Army? Will Elliot's other half, Mr. Robot (Christian Slater), deliver death blow to Evil Corp? What the hell does new-on-the-scene car salesman Irving (Bobby Cannavale) have to do with any of this? Remember that the last episode of Mr. Robot aired long before Nov. 8, 2016, and trust that the new season will deal with the election fallout differently, if not more subtly, than American Horror Story: Cult.