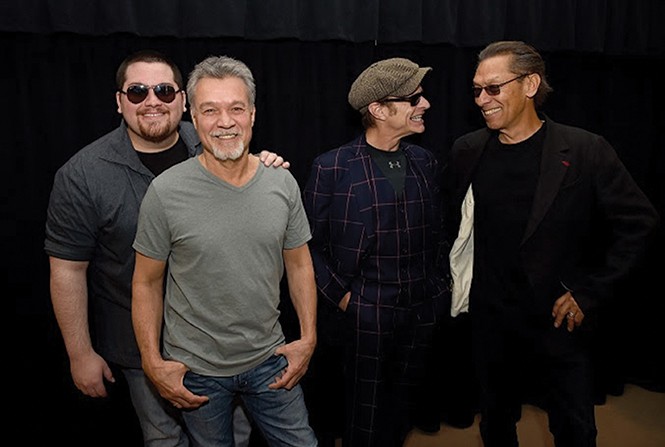 In 2006, I interviewed Van Halen's David Lee Roth for Harp. The publicist said I'd get 15 minutes, tops, on the phone. When we connected, Roth proved he was just as great a showman offstage as he is onstage. He was off like a shot—talking fast, telling jokes and sharing stories like a rock & roll Robin Williams. I think I squeezed in three questions.

Roth also had a story about Salt Lake City. He didn't recall the venue or the exact year, but said that to one side was downtown, and to the other was pretty much nothin'. So it could've been the Salt Palace. Anyway, after the show, DLR was standing behind the venue when a car careened around the corner, hitting another vehicle. Rushing over to help, Roth asked the driver—who was pretty banged up—if he was OK. "He looked at me for a minute," Roth said. "Then he yelled, 'Diamond Dave?!' and started looking around for something for me to sign!"

After 98 minutes, he took a breath. I told him that my recorder hit max capacity 10 minutes prior. We bid each other a friendly farewell. I hung up, high on the once-in-a-lifetime encounter.

The buzz lasted roughly one year. One day in 2007, the bossman at Harp called. Our back-page column, "Reflections," had fallen through at the last minute. We needed to find a noteworthy musician to interview about an album that changed their life. "Whose numbers do you have?" asked my editor.

I looked through my phone, and found DLR's digits. "Call him," I was instructed.

I asked if he was sure I could call him cold like that. He said I'm within my rights to call him until he says not to call again. So I did, despite feeling that it could end horribly.

But maybe not, you know? After all, Roth gave me 83 minutes of bonus interview that time. He's totally cool. I dialed.

"Yo!" said a booming voice on the other end. It had to be Roth. I introduced myself and suddenly the voice was nasal and nebbishy. "Dave's not here." The line went silent. "Dave, are you there? Hello?"

I wasn't sure what to do. There was no click, no static—only silence. What would I tell Harp? We were going to press that day. Could I go back to my boss and tell him that maybe Roth hung up on me? Or should I sack up and call back? I mean, he didn't say not to call.

You should always trust your instincts. For the second time that day, I ignored them and, trembling, redialed. It was then, as the phone rang, that I noticed, among the other headlines on my computer screen, that the Van Halen reunion tour had imploded. An alarm in my head went off: Hanguphanguphangup!

That time I was pretty sure he hung up on me. I put down the phone and hung my head, monumentally bummed. Oh, man, I thought to myself. Diamond Dave hates me. Then again, there was a bright side: I had a recording of David Lee Roth telling me to fuck off! I edited the clip down to those two words and made it my email notification sound.