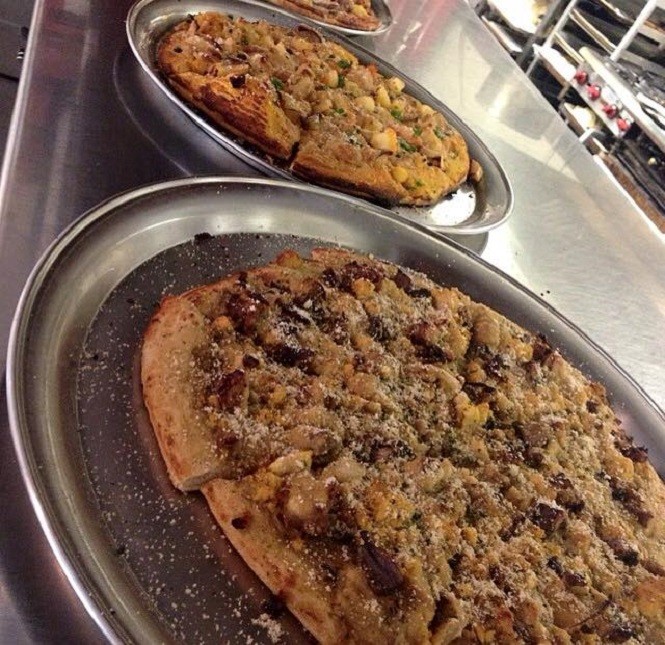 Vegan pizza might sound like an oxymoron, but there are enough delicious dairy and meat free pizzas in Salt Lake City to change your mind. Or, at least distract you from the usual pepperoni and mozzarella.

Before vegan eating was a trend, Italians were dining on pizza without cheese for hundreds of years. Heavy meat and cheese isn’t necessary when good crust and flavorful ingredients are involved. Settebello Pizzaria Napoletana makes a delectable and authentic Marinara pizza topped with crushed tomatoes and a flavorful combination of garlic, oregano and basil. A drizzle of extra virgin olive oil is all the decadence this pizza needs. What makes Settebello’s pizza unique is the crust, it tastes like nothing else in the state. The lovely spots of char tell you that it’s been baked in a blistering hot wood-burning oven.

Este Pizzeria serves thin New York style pizza and killer vegan options using Daiya, a soy-based cheese substitute that melts and stretches enough like real cheese to use on pizza. The downtown location offers a Vegan BBQ “Chicken” pizza. Other cow-free options include the Vegan White, topped with garlic and olive oil, tomatoes, red onions and vegan cheese. For a side dish, don’t pass up the Garlic Knots: they are to die for - little knots of freshly baked bread loaded with fresh garlic, olive oil and oregano served with house made marinara.

The Pie Pizzeria has a mouth-watering selection of vegan options, clearly marked with cute green leaves on the menu. Try the Xtreme Veggie, loaded with artichoke hearts, spinach, Sicilian spiced tomatoes and red onions. Order it without vegan cheese, and let the veggies shine. They also have vegan ground beef, so you can build your own beefy, cheesy, vegan delight!

Sage’s Cafe and Jade Room wins the Best Vegan Pizza Award in Utah (a category that I just made up). Every Tuesday night they offer a creative lineup of vegan pizzas, like their creamy and rich carrot butter topped with spicy jalapeno. They also make their own vegan cheese like the savory "parmesan" made with a base of pulverized almonds and their tasty “moxarella” which melts beautifully. Each week they come up with new and interesting pizza; each Tuesday night is an adventure in pizza eating. Craveable pizzas include the Thai and Potato Pizza and the popular Pesto, Fennel “Sausage” (house made of course!) with Kalamata Olives. The best part? The weekly pizza feast is all you can eat for only $12.75.