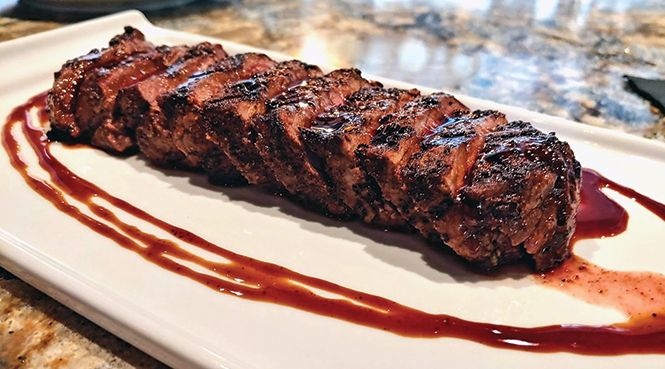 It seems like our Southwestern neighbors from Las Vegas have been moving into town, bringing their flair for the dramatic along with them. I've enjoyed seeing the Vegas theatrics weave their way into the fabric of Salt Lake's food scene, mainly because it's shown that we can hang with the Vegas crew without missing a beat.

When I wrote a Back Burner blurb about the Vegas-based Carson Kitchen (241 W. 200 South, 385-252-3200, carsonkitchen.com) opening its doors in the heart of Downtown Salt Lake, I was curious about what brought them to our neck of the woods. Following a gracious invitation from chef and owner Cory Harwell to give the place a whirl, I got the opportunity to explore that curiosity.

Chef Harwell opens restaurants in cities that are close to his heart: Vegas was where he started his culinary career, Atlanta was where he grew up, but Salt Lake City was simply a place that made an impression. He had visited Utah before, but he fell in love with our state after some local friends showed him the cultural nooks and crannies that are often overlooked by casual travelers. The stars aligned earlier this year when the downtown SLC location of Carson Kitchen opened up below the metropolitan Milagro Apartment Complex, near the Salt Palace Convention Center.

Even before I visited Carson Kitchen, I could tell that this was a menu that spoke to my gastronomic identity. It's all about taking comfort food like deviled eggs, buffalo wings and bread pudding, then dolling them up with a bit of finery and flourish to enhance their natural, soul-fulfilling deliciousness. All in all, it makes for a fun menu to explore while introducing more timid diners to the wonders of foie gras and caviar; this is a great gateway destination for those ready to make the leap from casual to hardcore foodie.

When I talk about Carson Kitchen's use of caviar and foie gras, I am of course discussing the Devil's Eggs ($11) and the veal meatballs ($13). Both unassuming appetizers born from humble beginnings, the team at Carson Kitchen spruces them up with just the right amount of culinary technique and sophistication.

The Devil's Eggs arrive looking rather dapper in their crispy pancetta and caviar accoutrements, filling piped into an aesthetically pleasing spiral. I've been burned before by deviled eggs that have tried to transcend their roots at grandma's Thanksgiving table, but I was very happy with these well-stuffed appetizers. They retain the creamy, mustardy appeal of the deviled eggs you've likely grown up with, but the crispy pancetta and caviar are textural wonders.

The veal meatballs are even more surprising, since they don't arrive in quite the same dolled-up fashion, but pack even more flavor. It's the sherry foie gras cream that really puts the full-bodied meatballs over the edge. This is a dish that celebrates the flavorful nuance of the proteins involved, and that foie gras cream spikes the whole thing with just the right hint of sinful danger.

Part of Carson Kitchen's successful appetizer game comes from their homemade condiments. For example, the crispy chicken skins ($10) are a deliciously crisp and crunchy snack, but dipping them in the smoked honey that comes along for the ride makes for sweet and salty bliss. The tempura green beans ($12) are crispy and fresh with just a little bit of salt, but the pepper jelly cream cheese turns this into incredibly posh pub food.

After establishing that the appetizer game at Carson Kitchen was home to some of the most inventive and fun items that I've encountered in a long time, it was time to see if the entrees would follow suit. Kicking things off with a fresh brussels sprouts Caesar salad ($14) is a good way to prime the palate for some of the menu's richer fare. It's a classic Caesar tossed with house-made dressing and topped with thick, crispy bacon lardon—in short, it packs all of the flavors that make you excited to dive head first into your entrée.

It's hard to choose, but the cocoa espresso New York strip ($25) is a helluva steak for a decent price. The trick to making this entrée stand out is the cocoa espresso dry rub, which invokes some lovely bitterness to play up the unctuous beef. The red wine demiglace adds yet another layer of richness—everything on this plate works together for a truly memorable carnivorous experience.

I would of course be remiss if I didn't mention the glazed doughnut bread pudding ($11) slathered in three-rum caramel and vanilla crème anglaise. This is an epic achievement for so many reasons. Using doughnuts as a bread pudding base is brilliant enough, but that three-rum caramel and crème anglaise just soak into this marvel, imparting an almost souffle like texture. It's amazing, pure and simple.

Based on my experience with Carson Kitchen, I think the Vegas sensibility is a nice fit within the heart of Salt Lake—especially when it comes to food. The more culinary renegades, innovators and unapologetic creative forces open up shop here, the more exciting it gets to dine out in SLC.