Las Vegas Eats: Making a beeline from the Beehive to Sin City 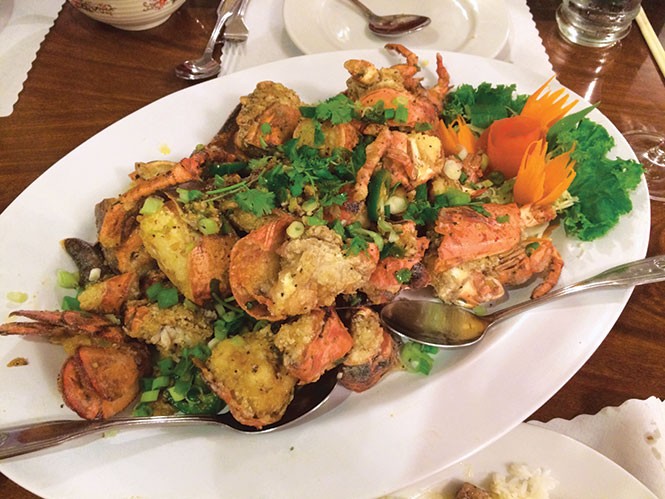 With the exception of a few curves in the road in Virgin River Canyon, it's a straight shot to Las Vegas, which, thanks to 75 mph speed limits much of the way, feels surprisingly close to Salt Lake City. It's about a six-hour drive from Salt Lake City, but by air, it takes longer to get through security and the airport boarding process than the actual flight, which is a little more than an hour. At any rate, every now and then I get the urge to indulge in the vices a quick getaway to Sin City offers.

Those vices might not be what you think. I don't really gamble much; on this most recent trip, I was given a voucher from the hotel when I checked in for a free slot-machine pull. I won $10, walked away with my winnings, and didn't gamble the rest of the trip. Nor do I overindulge in drink when I'm in Las Vegas; you won't find me staggering The Strip with a yard-long neon plastic cocktail container in my hand. And hookers would be out of business if mine were the standard Las Vegas visitor profile. No, my Vegas vices revolve around excellent food and entertainment.

With so many dining options and celebrity chef-run restaurants in town, it's difficult at times to decide where to eat—a problem I embrace, happily. Should I dine at Joel Robuchon's or at Guy Savoy's? At Charlie Palmer's Aureole or Tom Colicchio's Craftsteak? Hubert Keller. Pierre Gagnaire. Jean-Georges Vongerichten. They all beckon.

However, on this most recent visit to Vegas, I tried some spots that are probably under the radar of many foodies, and places that wouldn't require refinancing our house to pay for the meals. Here are a few I can highly recommend if your travels take you to Las Vegas.

If the name Matthias Merges sounds familiar, it should. He was chef du cuisine at Charlie Trotter's in Chicago, and served as Charlie Trotter's right-hand man for most of the time the restaurant existed. Merges took some time off to open The Metropolitan here in Salt Lake City before returning, eventually, to continue working with Charlie. A few years ago, Matt opened his own very successful Chicago restaurant, Yusho, and more recently, a second outpost in Las Vegas' Monte Carlo Resort and Casino.

Yusho (3770 S. Las Vegas Blvd., 702-730-6888, YushoLV.com) specializes in Asian-style street food at close-to-street-food prices. It's one of the best bargains in Vegas. There are seven types of ramen on the menu, my favorite being the classic tonkatsu ($16) with crispy pork belly, Thai chilies, poached egg and possibly the best ramen broth I've had outside of Japan. Homemade steamed buns ($5-$6) are excellent and include choices of crispy cod, pork shoulder with caramelized kimchi, eggplant with sweet soy marinade and Fuji apples, and crispy chicken. Skewers from the grill include octopus, duck breast, Chilean sea bass, pork belly, lamb, tofu steak, hamachi kama and ribeye. Better yet, just put yourself in the chef's capable hands and dine omakase-style "to entrust": $65 for five courses.

Prior to attending Cirque du Soleil's Beatles extravaganza, Love, we enjoyed an early dinner at the Hard Rock Hotel's Mexican cantina, the Pink Taco (4455 Paradise Road, 702-693-5525, HardRockHotel.com). It's a fun, boisterous place with 2-for-1 drinks and inexpensive antojitos during happy hour. The menu ranges from Mexican sandwiches called tortas and Sonoran "street dogs" to full-on meal-size plates like pescado Veracruz ($18), slow-roasted pork carnitas ($15), street tacos (three for $11), burritos, tamales and more. I was thrilled to discover another outstanding eatery at the Hard Rock, a restaurant with a terrific poolside patio called Culinary Dropout (4455 Paradise Road, 702-522-8100, CulinaryDropout.com) (I'll give you one guess about chef Sam Fox's culinary education). Share a pot of black mussels with spicy sausage cooked in Stella Artois ($13) or barbecued pork-belly nachos ($14), before moving on to entrees such as sweet-corn cannelloni ($16), homestyle meatloaf ($18), or rainbow trout with green beans, caramelized shallots and toasted almonds.

About The Beatles Love: I grew up with the Beatles, so I was expecting greatness from the Cirque du Soleil show. And I got it. But my 15-year-old son, Hank, provided the ultimate review: "That's the most amazing thing I've ever seen!" he said. And, like any Cirque du Soleil performance, Love is impossible to capture in words. It is, at times, a participatory experience on the part of the audience, and kudos to the creators for 1, using original Beatles recordings, remixed for the show by Beatles producer George Martin and his son Giles Martin, and 2. not casting characters to play John, Paul, George and Ringo. The only time individual Beatles are identifiable is via photos and videos projected on screens. If you see only one show in Vegas, it should be Love.

And, love is what I feel for Las Vegas' best pizza: The coal-fired oven at Grimaldi's (3327 S. Las Vegas Blvd., 702-754-3448, GrimaldisPizzeria.com) in The Palazzo produces pies exactly like those from the pizzeria's original 1905 Brooklyn Bridge location.

The best meal, by far, I've had this year was at Lago, the new Julian Serrano restaurant in The Bellagio (3600 S. Las Vegas Blvd., 866-259-7111, Bellagio.com). This is Serrano's brilliant take on Italian-style tapas. Seated on the patio next to the Bellagio's famed dancing fountains, we enjoyed plate after plate of simple, yet exquisite, food. A crudo choice like tonno ($19)—raw ahi tuna with orange and micro-greens—was divine, as was lightly browned potato gnocchi with lobster knuckles and salsa di crostacei, a heavenly, rich shellfish sauce. Veal-stuffed agnolotti ($16) in a silky veal demi-glaze was stupefying; ditto fusillioro pasta Abruzzo-style with lamb ragu and fresh ricotta ($15).

I said I didn't gamble, but that's not quite true. There's an incredible Thai restaurant in an off-Strip shopping center called Lotus of Siam (953 E. Sahara Ave., 702-735-3033, LotusofSiamLV.com). The food is amazing, as is the wine selection. An entire wall is devoted solely to Riesling. I was told by foodie friends to order the fried lobster, which must be done in advance, so I did. Did I ask what the market price was? Nope. That was my big gamble. When the bill arrived, the lobster was $145! It was a helluva lobster, but I sort of felt like I walked away from the table a Las Vegas loser.