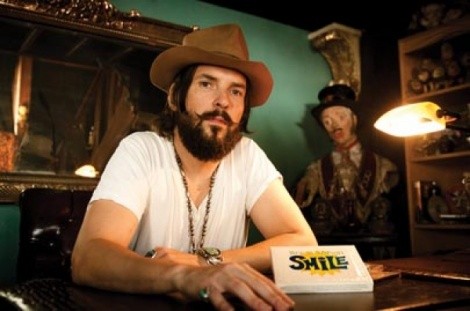 “My version of an iPod on shuffle is just reaching into the box while driving and putting in whatever CD I pull out,” Fox says. His home collection exceeds 500 CDs, and this box houses more than 50 albums. In road-trip fashion, we pulled them out randomly, along with the tracks; find Fox’s thoughts on them below.

Although Fox is an audiophile and surrounds himself with music each day—CDs, concerts, musician friends, memorabilia—that doesn’t necessitate his use of a digital-media player. And he’s not alone: Several folks City Weekly has contacted in the past—Salt Lake Arts Council’s music guru Casey Jarman and Slowtrain Records employee Vanessa Wardy, among others—don’t prefer them, opting for physical modes of musical enjoyment instead.

“I think technology is overrated,” Fox says. “For example, I recently received a handwritten letter in the mail from a close friend, and it was the most refreshing communication I’ve had in years.”

He receives numerous mailings, actually. That Weetabix Chunky Fruit Bars box wasn’t filled with cherry-flavored pastries when he received it; it was the vessel for a vintage leather jacket—one of many monthly eBay purchases. Fox is obsessive about vintage leather jackets: One whole room of his house is dedicated to the things, thanks to their growing numbers.

“I’ll watch the show Hoarders and say, ‘Wow, look at all that stuff. Those people have issues.’ At least the things I own are worth money,” Fox says. “Then I saw The Nate Berkus Show, and there was an episode about ‘Heirloom Hoarders,’ and, well, that sort of nailed me.”

When he opened Velour five years ago, however, his hoarding tendencies and his collectibles became vital. Many of Fox’s quirky goods now decorate the club. And his “heirloom hoarder” mentality has helped put Provo on the national music map.

“My favorite part of collecting is the treasure hunt. I’ll spend hours in thrift stores, antique stores, flea markets and eBay to find that perfect item to add to the collection. I often apply that same passion to finding new musical talent,” Fox says.

Velour hosts a weekly Tuesday-night open-mic, numerous new-artist showcases and a biannual battle of the bands that serve as opportunities for Fox and others to find the “next big thing.” Some of Utah’s biggest acts were discovered during these nights. During the past five years, Provo bands have blown up: Neon Trees signed to Mercury, Isaac Russell to Columbia, Joshua James turned down Capitol, and bands like Fictionist, Desert Noises, The Moth & the Flame and more have potential.

“I often joke that my newest collecting passion is major-label signings from local bands,” Fox says. “This is definitely one collection that I want to keep growing.”

The Origin, “Set Sails Free,” The Origin
This was the band that shifted my interest from ’80s New Wave to more retro, folk-influenced music. They were a San Diego band that had huge success in Utah for a few years. I first saw them in 1990 at a free X96 show at the old Speedway Cafe. It was probably the hottest concert I’ve ever been to, and the band went on an hour late, but, for whatever reason, it was just one of those magical nights. They heavily influenced my musical taste and fashion sense for the next several years.

William Fitzsimmons, “Hold On With My Open Hands,” Goodnight
I was introduced to William Fitzsimmons by Jake Buntjer, a local photographer and graphic designer. We frequently collaborate on art projects, and part of the creative process seems to be us going off on tangents and introducing one another to new music and art. I haven’t had this album long enough to single out songs, but it’s great melancholy music. I just caught his concert in Salt Lake recently; it was the quietest I’ve ever heard Urban Lounge.

Brian Wilson, “Mrs. O’Leary’s Cow,” Smile
This was supposed to be Brian Wilson’s masterpiece follow-up to Pet Sounds in the late ’60s, but was a little too “out there.” It was shelved by the label before it was finished. The Mother Hips’ tour manager sent me the rare, unfinished tracks that had leaked and been passed around by music collectors for years. In 2004, Wilson finally finished and released Smile. It’s not nearly the album Pet Sounds is, but it’s still pretty amazing.

Jerry Garcia & David Grisman, “Walkin’ Boss,” Grisman & Garcia
This is another blast from my past. I managed a band called Ali Ali Oxen Free in the ’90s, and they established a popular, monthly acoustic show at a local restaurant/venue. This was always the prelude music to the show, and it brings back great memories. I also have fond memories from attending several Grateful Dead shows during that decade. I was probably the soberest hippie in existence at the time and had hair all the way down my back.

Depeche Mode, “Dressed in Black,” Black Celebration
Depeche Mode was definitely one of the most influential bands of my youth. And this was their landmark album, in my opinion. There is some music that you listen to to cheer yourself up—this is not that music. It was a perfect soundtrack for those moody teen years, though. I recently dusted off a bunch of my old music to play for a young local band that has recently discovered the ’80s, and that’s how this album ended up in my road-trip box.