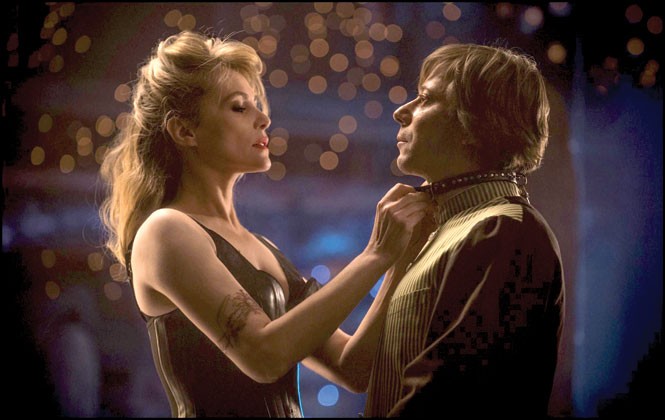 It's such a silly thing, really; it shouldn't matter at all. I mean, when we're considering a film adaptation of David Ives' Venus in Fur, there are so many meaty angles from which to approach it: the thematic depth of Ives' text, the complex matter of director Roman Polanski taking on a story about the way men can misuse their position of power, the performances that provide crucial weight to a two-hander that might feel too talky onscreen. Yet there I was, watching Polanski's Venus in Fur, thinking one of the more improbable things I can remember thinking about a movie: "These subtitles are a big mistake."

Polanski shifts the setting of the play by adapting it in French, retaining all of the basic plot details. A theatrical director named Thomas (Mathieu Amalric) is casting the lead female role in his own adaptation of an infamous text, the 1870 novel Venus in Furs by Leopold von Sacher-Masoch (the namesake of "masochism"). While Thomas is lamenting over the phone to his girlfriend about the lousy options after a long day of auditions, in bursts Vanda (Emmanuelle Seigner). She's late, but desperate to give it a shot, and Thomas reluctantly starts reading with her—only to discover she has some fascinating insights. And her own costumes.

Ives' play is a thrilling piece of intellectual theater—Salt Lake Acting Company mounted a superb production this past season—and Polanski doesn't monkey around with its strongest elements. It's a wonderfully tangled trip through the idea of the "male gaze" in art, with Thomas' initial complaints about the passive, immature nature of the other actresses he has seen for the part giving way to contemplation of how Thomas handles it when a truly powerful woman is in front of him. It's often hard for viewers to separate Polanski the filmmaker from his own sordid history, but he genuinely seems to "get it" as he digs into the difference between surrendering the upper hand on your own terms, and finding yourself genuinely at the mercy of someone else's whims.

He also winds up with a terrific match of lead actors while re-teaming The Diving Bell and the Butterfly co-stars Seigner and Amalric, even if he happens to have cast his significant other in the role of Vanda. Seigner does superb work gliding back and forth between Vanda the actress and the role she's playing for Thomas, making the transition from submission to dominance so subtle at times that it might be hard to identify precisely where it tips. And Amalric nails Thomas' eroding control over his own scenario, from the point where he tells Vanda he wants to "see if you can take direction" to the point where he gives choices of staging, lighting and other details over to Vanda. He also gets some wonderful bits of physical acting: gently and guiltily pushing Vanda's bag under a seat in the theater with his toe while he's on the phone with his girlfriend, or slooooowly zipping up her thigh-high boot with a lingering touch.

So how does a ridiculous detail like subtitles potentially hijack such a strong foundation? It's a matter of the way the words appear on the screen: in plain text when Thomas and Vanda are speaking to one another as Thomas and Vanda, and italicized when they're speaking to one another as the characters in Thomas's play. That feels like a huge miscalculation in a narrative that pivots on the moments where the line between those two levels of interaction blurs—Vanda becoming the "mistress" who subjugates her willing slave, but also physically transforming Thomas into the play's female protagonist. The breaks between the characters playing out the script and becoming those characters are crucial, both as thematic material and, occasionally, as punch lines. And unless you're fortunate enough to be fluent in French, the words on the screen are spelling out those breaks for you.

Ultimately, Venus in Fur is too strong a piece of source material too smartly executed to be undercut too much by so small a detail. But perhaps it should serve as a warning to those who do such post-production work, one that feels of a piece with the narrative's ideas: You can change the meaning of a text completely, just depending on the particular slant you give it.