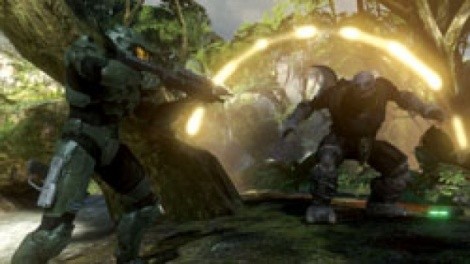 Do a quick Yahoo! search for Halo 3 and it’s obvious that you don’t need to come here for a review. The game is being marketed so well, there is probably a review in Cat Fancy magazine.


I don’t like the Halo franchise; I am not convinced that it’s all that revolutionary a title. The coolest thing about the game is the wicked-awesome television commercial that looks like a diorama of exploding bodies. That’s good, but, for me, the games have never lived up to the hype.

As far as I’m concerned, it’s the Tickle Me Elmo of video games: We buy it en masse until the shelves are empty because we’re told it’s the best and hottest thing on the market. Hey, maybe I’m the horse’s asteroid. The game made $300 million in its first week, and $170 million in its first day. Xbox 360 sales doubled. But I easily can think of 10 games—new, old and forthcoming—that I’d rather spend my time and/or money on.

10. Scrabble (Parker Brothers): Hey, I didn’t say this list would contain just video games. I like Scrabble a lot because you can think of Halo 3 and spell stuff like “overrated,” “overhyped” and “craptacular.” Sweet; I think that last one was even a triple word score.

9. Madden 2008 (EA Sports): I only put it this high on the list because some would argue that it’s just as overhyped as Halo 3. But, this is my list, and I’d rather play football with Peyton Manning than zip around space in a game that Bill Gates dubs a “cultural phenomenon.”

8. Bully (Rockstar Games): Bullworth Academy’s antihero Jimmy would pummel the Master Chief with stink bombs and firecrackers until he ran tattling to the principal’s office.

7. RumbleBox (DigiPen.edu/GameGallery/websites/rumblebox): The beauty of this game—winner of the 2006 Slamdance video-game competition—is its simplicity. It’s an independent fight-to-the-death title where you battle in a cube of death against several attackers. As you dispatch them, their body parts lay on the ground, and you have to climb over them to escape the cube. And do you know the best part? All of the characters are made up of cubes, and there’s no blood or gore except what you imagine. Pure low-tech genius.

6. A game of dodgeball with Roger Clemens, Randy Johnson and circa-1984 Nolan Ryan: I would rather be pummeled, drilled and lambasted with hard rubber balls by three of the hardest-throwing pitchers ever to play baseball than sit down at an Xbox 360 with this game. Also, spending a couple of hours staring at Johnson’s distorted evil bird-face is a price I’m willing to pay.

5. Manhunt 1 and Manhunt 2 (Rockstar Games): Do you want to pretend to kill something? Do you really? Then don’t spend your time on mythical space creatures; plop your butt into the middle of this sick, twisted hunt-or-be-hunted series. The sequel was so bad it was banned in Ireland and the U.K., and the ratings board here gave it an adults-only “A” rating. We’re getting a watered-down version in the coming months, and the original will live forever as an urban legend—sort of like the existence of snuff films or people willing to actually pay $2 million—or whatever the hell it costs—for the privilege of playing the PS3.

4. Grand Theft Auto (Rockstar Games): I’m anxiously awaiting GTA IV, which has been delayed until next year because developers needed more time to finish it. But until then, there’s not a piece of this series I wouldn’t play before Halo 3. I’d even rather go on eBay and find an old PS1 copy of GTA: London 1969 before blasting off with Halo 3.

3. Metroid Prime 3: Corruption (Nintendo): If you want to kick some space ass, Metroid is the way to go. I would take the lovely and talented Samus over the Master Chief any day. It’s hard to believe that the Wii and its interactive controls could be any better, but Metroid Prime accelerates the console into the stratosphere.

2. The Guitar Hero Series (RedOctane): It doesn’t matter which version you play, you can’t have a better time with your video-game system. The new installment due out in a few weeks will feature slash from Guns N’ Roses, and songs like “Paint It Black” by the Rolling Stones and “One” by Metallica. This will be the real game of the year.

1. Pong (Atari): This was a close one. I honestly thought I wanted to play Halo 3 more than watching a digital ball on a black screen get knocked back and forth between two digital sticks. But, hey, what do you know … I was wrong.