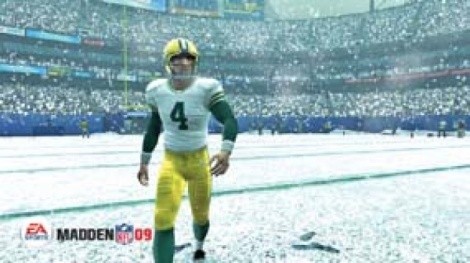 When I think of the term “IQ test,” the name John Madden is not the first thing that pops into my head.


There’s no doubt that the man has some football knowledge. But maybe it’s the okey-doke tone of his voice or the way that he makes observations that are painfully obvious; he has always come off a little bit oafish. John Madden making me take an IQ test is sort of like Matt Schaub telling Tom Brady how to win Super Bowls (My many fans in Houston are steaming right now, let me tell you).

So when I buy my brand new Madden NFL Football 2009, and I see that old John wants me to take a test to make sure I’m smart enough to play his game, I get more than a little confused. The new game function is “Madden IQ,” in which a player goes through a series of tests to determine his or her own personal skill level. The computer then adjusts its artificial intelligence to match your skill level. Every player starts with an IQ of 500, which is then adjusted depending on how you perform in the skills tests. As a paranoid online player, I don’t want to give specifics, but my Madden IQ is safely above 400.

But this new fascist ratings system doesn’t stop there. You may have seen the television commercials where Madden begins to give a speech about how he hates dumb players who make dumb moves in dumb situations, like not punting on fourth down in your own territory. Look John, I didn’t become a Madden god by calling in a punter on fourth and 26 from my own 3-yard line. Everyone knows you spread five wide receivers in a “Hail Mary” and catch one of the guys streaking down the sidelines.

I’ve always loved the game, but this new feature has me a bit frazzled. My favorite video games are the ones that give me the most control. I love Grand Theft Auto because I can car jack somebody or not, or I can rob somebody, or I don’t have to. It’s up to me—freedom of choice. But now I’m going to get penalized for calling plays outside the box because Mr. Madden deems my style of play stupid?

The funniest part of this whole IQ debacle is that in addition to this feature, the game also offers one I like to call “Thanks to this feature, any moron with $49.95 can play Madden without actually having to learn how the stupid game works.” I know it’s long; I’m working on an acronym. Basically, there’s an extremely easy function that allows you to play the game by simply pushing one button. Want to run? Push a button. Want to pass? Push the same button and you’ll throw it to the open receiver. I’d like someone to throw an IQ test at the genius over at EA Sports who came up with this little gem. Video gamers get enough flak for being lazy; now it looks like we might actually earn it with this invention.

I don’t mean to complain; Madden 2009 is still a great game. But I play video games to suspend reality for a while. Look John, if I cared enough to play realistic football, I’d do some squats, grab a helmet, put on a cup and hit the gridiron.

I love wrestling games almost as much as I love football games. The first installment from the guys at TNA is a pretty nice first outing. It’s very easy to play and maneuver your wrestler; however, its simplicity is also one of its shortcomings. Every wrestler, whether it’s Kurt Angle or Kevin Nash, moves pretty much the same. It’s not a bad game by any stretch, but it’s also not as good as I had hoped. (Midway Games, Rated T, Xbox360, PS2, PS3, Wii; $59.99)