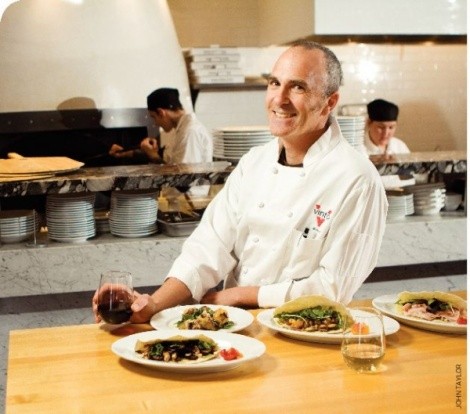 Does Salt Lake City really need another pizza joint? Well, of course we do! Who, except for non-cheese-eater X96’s Gina Barberi, doesn’t love pizza? Why, it’s as American as pizza pie! So, enter Vinto.

Vinto ain’t your daddy’s pizza parlor—unless, that is, David Harries is your daddy. If so, lucky you, because Harries has a knack for creating visually appealing, palate-pleasing eateries—he’s been doing it for about 30 years, dating back to the original Riverhorse Café, Ameci and Barking Frog in Park City as well as the Park Café in Salt Lake City. Harries also created Fresco Italian Café and Trio in Salt Lake City before selling them and moving on. But, you can’t keep a good man down. And, having been out of the restaurant biz for a few years, he found himself itching to get back in. The result is Vinto, which features “casual Italian wood-fired pizza.”

Given the wood-fired pizza oven theme, I expected Vinto to be rustic-looking. It’s anything but. Enter Vinto and the first objects to catch the eye are huge round hanging “lamps” that look a little like giant rice-noodle balls. To the right is a sleek bar/counter, and the rear dining room area is separated visually from the front of the restaurant via the clever use of high-backed circular booths. According to Harries, who designed Vinto, the serpentine booths serve as faux walls, enabling him to create an open restaurant space, undivided by walls, but still with distinct dining areas. In the rear are horizontal black-and-white stripes, Harries’ homage to the famous cathedral in Siena, Italy, where he and wife Deborah spent their honeymoon. In short, Vinto is all very contemporary and modern—in contrast to the food, which is mostly rustic, casual and straight-forward.

The Vinto menu consists mainly of antipasti, salads, piadina (flatbread sandwiches), pizza and desserts. Each day, there’s also a special zuppa (soup) and pasta dish offered. I heard more than one server refer to Vinto cuisine as “fast food,” and they’re not kidding. But don’t let the negative connotation dissuade you. The food at Vinto is fast, thanks in part to a state-of-the-art wi-fi ordering system. Servers carry handheld devices and mini-printers attached to their belts. So, before you’re even finished placing your dinner order, drinks may have already appeared at your table. It’s pretty cool. However, if you prefer to linger, you might want to ask your server to slow down. High-speed is the default service setting at Vinto.

Two starters at Vinto—where Robert Angelilli (aka “The Mushroom Man”) runs the kitchen—hold great appeal. First, there’s a baby artichoke that is poached, grilled, quartered and served on a bed of arugula with a zippy shallot vinaigrette ($7.50). Then there are meatballs, and by meatballs, I’m not talking about those dreary afterthoughts that are so often served with spaghetti. These heavenly orbs are in a class of their own. A now-local, East Coast-born pizzeria owner told me that Vinto’s meatballs are the only ones he’ll eat. That’s high praise. But it’s deserved: Along with Greg Neville’s oversize meatballs at Lugano, these are the best balls around. Yes, $8 might sound pricey for three meatballs. But once you dig into them, served with rustic homemade pomodoro sauce and thick slices of grilled bread, you’ll happily pay the price. They actually taste like meat, not filler, and are of the perfect density—not too heavy, not too light.

A grilled vegetable (zucchini, eggplant, red onion, arugula, mushroom, roasted peppers) piadina sandwich ($6.50) made with unleavened flatbread (sort of a Roman wrap) and parmesan and pesto vinaigrette delighted my wife, and I—admittedly not a vegetarian—also found the sandwich delicious. Ditto a simple tomato-garlic soup ($4), made with vegetable stock and given a slight Asian accent with a drizzle of sesame oil and black and white sesame seeds.

I’ve tried three of the pizzas at Vinto, with varying results. The first, and my least favorite, was its Margherita ($8). The crust was a little too thick and chewy for my taste, and the tomato sauce was garlicky. To me, garlic doesn’t belong anywhere near a Margherita pizza; you may disagree. The oblong-shaped, wood-fired pizzas at Vinto come served on plastic cutting boards—a cool touch. By far the best version I tried was a daily special pizza with fennel and heirloom tomatoes. That one nailed it.

A third pizza, called “Tuttabella,” featured house-made sausage, caramelized onions, roasted yellow peppers, sliced Roma tomato, garlic and fresh mozzarella ($9). “It’s the most popular pizza we serve,” our server told us. I’m not sure why. Even with all those yummy-sounding toppings, the pizza was bland. Caramelized onions were cooked, but not sweet; tomato slices were just barely ripe; and the small bits of sausage were dry and fairly flavorless. I think the pizza’s blandness might be at least partly remedied with the addition of a salty cheese such as Asiago, Parmesan or Provolone. However, I might be overly critical. My expectations for wood-fired pizzas are high, and Vinto’s pizzas are still better than at least 95 percent of the pizzas I’ve tasted around town.

Glasses of wine priced at $6 and bottles costing $26 and $28 means you won’t have to break into the kids’ college fund to dine at Vinto. A good thing, because you’ll want to add-on a bodacious dessert of vanilla gelato drizzled with high-end extra-virgin olive oil and sea salt. David Harries has done it again.