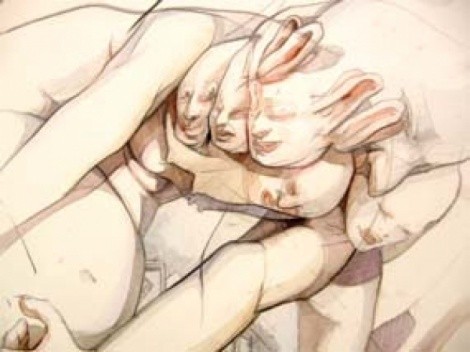 The story of artwork is the story of the eye and its various travels. A skilled artist will guide the optic sojourner in a deliberate arc, and the works Sri Whipple also travel through psychological and fantastical realms. That in itself isn’t uncommon, but the way his shapes are perpetually in the process of evolving makes their narrative more compelling. Abstract shapes are becoming figures, which are turning back into shapes, and the energy at times is nothing less than sexual.

Growing up in Salt Lake City, Whipple became interested in comics, which you can see in his cartoonish, somewhat grotesque outlines. After earning his bachelor of fine arts degree in painting at the University of Utah in 2000, he met Jason Wheatley at Poor Yorick studios, and the two began collaborating. Wheatley moved to San Francisco last year to start the Oyster Pirates artist collective, with which Whipple has exhibited there; he also shared a show with Wheatley in Berlin.

Whipple likes to go into a kind of trance state when he works, to give his subconscious mind free rein. For him, that mental journey includes not just a sensual and spiritual experience, but contemplating the history of art and influenced by everyone from Hieronymus Bosch to Mad magazine to Francis Bacon. The bulbous, flowing shapes he generates have a life of their own which he doesn’t try to determine but lets them emerge as they will. “I think of each painting as a stage,” he says, “a depiction of polymorphic forms through time.”

He admits that the transformative element in his work even blends male and female, and he notes that the tradition in Hindu art is a forerunner. Shapes in various stages of phallic or vaginal symbolism are in such flux that it’s almost as though there aren’t separate beings but just the energy coursing through everything. “It’s not about physical sex as much as the pliability of objects,” he explains. His most literal work features a Gulliver-like figure tied down, but “The Rambler”—the cover of local band Vile Blue Shades’ album John Thursday: California Adventure—is a tableau of unbridled debauchery with imaginary creatures only partly human. The rest of the works for his show with Steven Larson at Kayo Gallery are, you guessed it, also in flux.

Whipple’s work has been seen in a variety of contexts outside the conventional art gallery venue: from album covers to music flyers to a T-shirt design collaboration with Trent Call for local band Pink Lightnin’. You may have seen his work and not even realized it if you stand in line at the Main Library checkout, lost in thought staring at the abstract drawing on the wall behind the counter.

Kayo Gallery owner Shilo Jackson explains the fascination with Whipple’s work: “Sri’s pieces evoke a world of hedonism, darkness and fantasy. Sri reminds me of Hieronymus Bosch: Both of them make me want to explore the artist’s mind and retreat from something so incredibly different from daily life.”

In contrast, Steven Larson’s drawings confront the irrevocably mundane world, shifted into a different scenario after a minor apocalypse. Like a time-lapse photograph of a beachfront before and after a toxic spill, the images are consumed with the effects of the cultural and industrial landscape. “You can’t take everything in at first glance, so you need to take your time and really study what you’re looking at,” Jackson notes. Larson is featured in the most recent issue of the prestigious New American Paintings magazine, along with Trent Call.

Like Whipple, Larson starts sketching lines on the surface of the work and then reacts to them reflectively. But unlike Whipple’s generative syntax of sensuality as metaphor for the creative process, Larson’s images are populated with the detritus of junkyard rubbish. Yet his compositions are graceful, even eloquent, as if he was determined to mine the urban environment, filled with refuse, for whatever creative inspiration it might provide.

“I am both ripped apart and fascinated by images of war, and want to bring attention to the fact that it is still happening,“ Larson notes. Maps and weather are a significant influence on Larson’s work. He uses white space in his compositions in a startlingly masterful way, and he says his work “questions the value of completeness.”

Whipple and Larson had planned to construct some collaborative pieces, but at press time, they were uncertain whether those would be completed in time. Whipple’s collaboration with Trent Call for the 337 Project exhibit at the Salt Lake Art Center added his flowing shapes to Call’s pop-art tropes for a 3-D piece that was more than the sum of its parts.