Veterans of the Provo music venue recall its highlights, and hope it can survive pandemic closure. 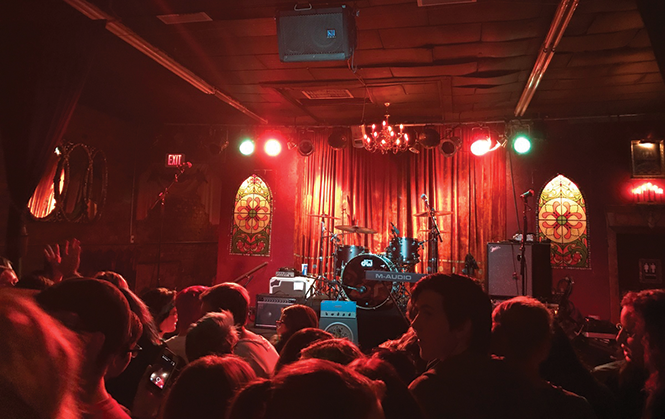 Whether you've been in its velveteen, jewel-toned interior to see or play at shows, or you just know one of the many famed bands that came up there, everyone in Utah knows Velour. And while January marked the venue's 15th birthday, March marks a year of firm closure and financial strain. But owner Corey Fox has his eyes set on the light at the end of this tunnel—and also wants people to look back at all the great things Velour has been part of in its home of downtown Provo.

As an all-ages, alcohol-free music venue, Velour quickly became home to all sorts of musicians in the Utah County scene when it first opened in 2006. Musician Landon Young (recently of Corner Case) was in high school in Provo when Velour opened up, and says the venue became a big part of their early years playing music. Eventually, Young would get to play at quirky events like a "slumber party show" with the band Bat Manors, who now play as a loose iteration named Choir Boy.

"The first show I saw at Velour featured a band called Monkeygrinder," Young recalls. "Each member was a costumed circus character with a murder-y backstory, including a pirate that played literal pieces of metal, a clown that shredded on accordion, and a bass-playing mime. I think he ended up eventually joining Neon Trees."

"A teen at the time, I was amazed to see such care and effort put into performance by a local band," he continues. "When I think about Velour, the thing that stands out most to me is that it's a space where you can embrace spectacle. You can have light shows or elaborate set pieces and not feel like a try-hard."

Even bands without those things, though, could count on the "purply lights, strobes and forever-running fog machine" to spice things up. "You could wear your heart on your sleeve. We joke about the shushing at Velour shows, but I'll never forget the precious magic of Brinton Jones performing a delicate acoustic song to a packed room of silent people after a Palomino/Devil Whale set," Young says.

While Young and others enjoyed quirks like "doing the official dance moves with everybody at a sold-out Seve vs Evan show," and watching artists like John White or Mathematics et Cetera destroy their instruments on stage and going to Sego Fest, Velour was establishing a name for itself as a cultural hub, drawing people from across the country. One of these people was Darcie Roy. While living in Massachusetts, Roy spent her time wandering the East Coast chasing live music, and spending time with friends, some of whom were in Neon Trees. The band mentioned that the scene in Provo was very lively, and Roy—who was going through a divorce and working at Target, which would allow her to transfer anywhere—decided to journey out West to get a taste of it.

"I was in love with live music," Roy says, "so I figured it would be a good idea to move somewhere [where] I could go to lots of concerts while I figured out my next moves."

Once settled in Orem, she'd walk 10 miles a day to catch whatever was going on at Velour each night. "I went to every open mic even though I don't play, and I volunteered there awhile before working at Muse," she says of the University Avenue venue, which she would go on to buy in 2012, and which shut down in 2017. Before all that, though, she remembers her Velour days fondly, things like "walking out in the middle of an open mic because Brandon from Moth & The Flame had just performed, so it couldn't get any better than that," and booking a birthday show for herself on Labor Day Weekend that packed the space despite Imagine Dragons playing the Rooftop Concert Series around the corner. "It was a better turnout than Corey and I expected on such a night," she says. "I wandered around the venue, handing out an assortment of cupcakes I'd baked."

Another former Velour associate, Kaneischa Johnson, also has fond memories of Velour, as recent as last year when she was visiting from her new home in Austin, Texas, and attending the annual Les Femmes de Velour series. "It felt like coming home," she says, noting that she hasn't encountered an arts scene so vibrant since leaving Provo. "None of us knew at the time that it would be the real last weekend of shows for the foreseeable future—and the beginning of a struggle that continues to threaten Velour's existence."

Velour's main reason for shutting down and staying that way has been that Fox is immunocompromised—meaning that opening would put him at great risk. But Johnson has since helped spread the word about the threat of permanent closure, and meanwhile the venue has been getting some revenue from private rentals, what government funds there are, and donations. Fox also has fundraising pushes on the horizon, for which details are forthcoming and slated, hopefully, for April.

In the meantime, donate to keep this local treasure around to see its 16th year, by donating on Venmo at @velourlive and following on Instagram at @velourlive.