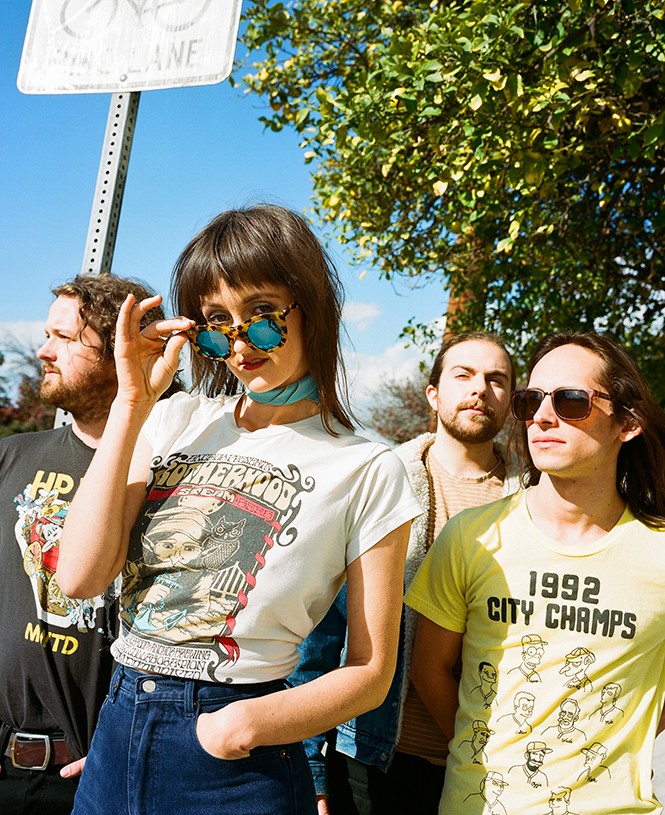 Los Angeles rockers Valley Queen released their debut album, Supergiant, in May, earning rave reviews from Rolling Stone. But the band's ascent might have been preordained: In 2016, with nothing but a few Bandcamp singles to their name, Natalie Carol, Neil Wogensen, Shawn Morones and Gerry Doot played NPR's Tiny Desk Concert, wowing host Bob Boilen with a winning blend of Laurel Canyon folk, classic rock chops and Southern roots. Nonstop touring ensued, with the band crisscrossing the country opening for established acts like Thao & The Get Down Stay Down and Laura Marling.

That time on the road solidified the band's chemistry and deepened its groove. Carol's booming voice resonated with fans while the band gelled, ultimately earning Valley Queen a hard-fought record deal with Roll Call Records. The pressure sent two of the original four band members (Morones and Doot) packing, however, forcing Carol and Wogensen to slow down, reassess their trajectory and focus on making the material that eventually became Supergiant as sharp as it could be. "I believed in myself," Carol says, "but I had also believed in the people around me. Valley Queen is not my solo project. I thrived in the collaboration. I knew nobody else could make this record with me but our original lineup."

Doot couldn't come back, so Mike DeLuccia stepped in on drums. But two months of discussions convinced Morones to return, and in November 2017 a reinforced Valley Queen entered the studio to lay down Supergiant, whose wistful moments ("Chasing the Muse" and "Gems and Rubies") mix effortlessly with epic power-pop ("Supergiant") and Zeppelin-esque hard rock ("Bedroom"). "We're so proud of the album," Carol says. "We finished it in February and it came out in May, and since this was our first time ever putting a full-length record out, it felt like a long time to wait. Going on tour will be a cool way to revisit our relationship with the songs. You go through a lot of phases—I'm excited to let them live again."

Although introspection is baked into Supergiant's lyrics, which document Carol's years of struggle to find a community in her adopted hometown of Los Angeles, it's also markedly a group effort. From the first hot licks of opener "Silver Tongue" to the final ringing peals of closer "Highway Pearls," raw emotion and visceral power drips from the album. "I love shredding on guitar, and I love how loud the band gets sometimes," Carol says. "But I also love the communication and dialogue required to turn songs written in very quiet, personal moments into a full band experience. It works a different muscle; I like playing with those lines, crossing those lines and figuring it out."

That patience reflects Carol's long journey from Arkansas, where she grew up in a family of doctors, to California for college, to a place in the ever-expanding firmament of Los Angeles' music scene. Her first band, formed when she was just 18, played music that she describes as "much more Arkansas-influenced." Over time, she says her environment began to seep into her sound, with California guitar rock a la Neil Young and Grace Slick becoming touchstones. "There's still something special about the state of Arkansas," she says. "There's a musicality about it that's probably in me in ways I can't even describe. If you're going to hear it anywhere, it's in my voice and my vocal phrasings."

And, oh, what a voice. Its resonant timbre recalls The Cranberries' Dolores O'Riordan, swooping and soaring from a whisper to a full-throated rage, feather light in some moments and ferocious in others. Every review of Supergiant has focused on Carol's pipes, to the point that I wonder whether it's all too much for a singer/songwriter just getting her career started. "I definitely made a conscious effort on this record to sing my ass off," she laughs, "so I totally appreciate the praise." Deflecting some of that admiration toward her bandmates, she adds, "Everybody put everything they had into the album, but we made a point to put the vocals up front in the mix."

Reminiscing on her childhood in the South, Carol says her favorite moments came while sitting in her closet or a bathroom, fantasizing about singing to hundreds of people. "That was my dream as a kid," she recalls, "but nobody I knew in Arkansas was pursuing music. My dad is a surgeon, my mom is an anesthesiologist, my brother is a vascular surgeon and his wife is an ER doctor, so I just assumed I was going to do medicine." She actually scrubbed into the operating room for a while until deciding to pursue her dream on the West Coast.

Thank goodness she did—one listen to Valley Queen's new album, with Carol's voice front and center, is enough to make you realize that the future holds something special for this band. "Los Angeles is where I really fell in love with music," Carol finishes. "Maybe it was just from being around musical people, or maybe it was finally having the chance to be anonymous. Either way, that belting voice you hear on the record? That started coming out when I moved to L.A."