Zombie Pub Crawl
A Zombie Pub Crawl is what it sounds like: Dress like a zombie and get increasingly undead as you replace the blood in your veins with alcohol. Starting Saturday at 7 p.m. at The Jackalope (372 S. State), continuing to the Green Pig (31 E. 400 South), Cheers to You (315 S. Main) and Juniors Tavern (30 E. Broadway), followed at 10 p.m. by performances from Accidente and Simian Greed, a costume contest and a “Queen of the Undead” crowning at Graffiti Lounge (342 S. State). “Join the horde” at Facebook.com/SLCZombies.

The Bourbon House
The Bourbon House (19 E. 200 South) just opened in the Monk’s House of Jazz old location below Kinko’s, and the basement has never looked better. It’s a great spot for those interested in a new downtown location. Entertainment and steady theme nights are up in the air, but that doesn’t matter when they’ve got things like a Juicy Lucy—a Minnesota burger invention featuring melted cheese between two patties. Welcome this new venture to town and check out their opening specials while they last: $2 Hamms, $3 Jameson, $3 Makers Mark, $3 Full Sail and $4 Patrons.

An Unexplored Place
We’ve never been to Mixed Emotions before. It’s a small bar on State Street that you don’t usually hear much about. But perhaps you’d like to go to an unexplored place, a dark corner in the SLC club scene rarely discussed and often ignored. Let us know how it goes if you visit the bar at 1030 S. State. 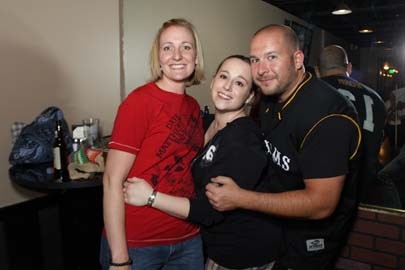