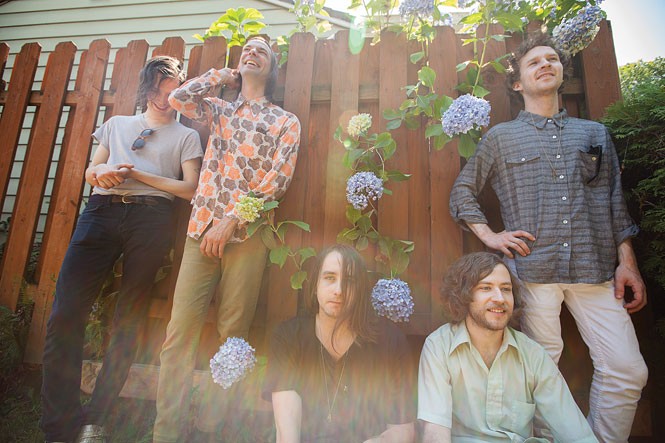 For Portland, Ore., band Wampire, it all started as a joke. Only a duo then, Eric Phipps and Rocky Tinder came up with the idea for the name Wampire as a nod to a German exchange-student friend who would pronounce the "V" in "vampire" like a "W," and the funny name stuck, despite their best efforts. "I think sometimes you don't necessarily choose your name, it's the name that chooses you," Phipps says.

That joke-y nature extended to Wampire's early identity as a band, too. "In the beginning, especially, we were ... kind of like a tongue-in-cheek dance project but with drum machine," Phipps says. Their dreamy, synth- and organ-heavy debut album, 2013's Curiosity, had a sense of goofy, off-kilter awkwardness that would've made it a fitting soundtrack for a PG-13 version of Napoleon Dynamite with making out and weed smoke. From the furry purple monster in the music video for "Orchards" to the old press photos of the band—soft-lit, wince-worthy portraits in the vein of awful '80s school pictures—the era of Curiosity found the members of Wampire never taking themselves seriously.

And as evidenced by Phipps' summary of Wampire's reception in the first year ("They're just fucking around"), neither did the rest of the world. After touring almost constantly for months in support of Curiosity, "it became very real that if we wanted to do this, we'd have to get pretty serious and we'd have to put our heads down and finish out what we started and not just peter out like some bands do," he says.

That decision propelled Wampire to make two big changes, as heard on their new album, Bazaar, released in October: The duo grew into a five-piece band, and they dropped the joke-y shtick—for the most part, anyway.

Musically, Wampire approached Bazaar with a whole new outlook. While they had started out playing "basically computer music" with added guitars and drums, Phipps says, "we're not about that at all anymore." For the making of Bazaar, they put together a "live band that has a powerful sound behind it," he says, and also moved away from the heavy use of "wobbly sounds and effects" that gave Curiosity its seasick feel. The goal, he says, was to make a sound that's "clean, mature, but still [has] some grit to it."

Wampire also toned down the silliness to avoid getting pigeonholed. "That was fun and all to be like, 'Haha, this is kind of a joke band,' but in the long run, as an artist, you don't want to be pushed off in the realm of fake novelty," Phipps says.

That's not to say that Wampire are all business, all the time; they're just finding some balance. "We're trying to make awesome jams that you can get behind in terms of like recording and production styles, too," Phipps says. "We're not really trying to joke too much, but there is a certain element of that playfulness that's still in our music."

That playfulness is especially apparent in the music video for "Wizard Staff"—Phipps and Tinder play the parts of cops who are tracking a mysterious wizard around a city—but on a more subtle level, it's also found in the eclectic nature of Bazaar.

Featuring styles as diverse as surf, jazz and psych-pop, Bazaar is titled as such because of its grab-bag-like feel, similar to the variety you'd find in an actual bazaar. All of the sonic experimentation can be somewhat gathered under the umbrella of psych-pop, but still holds to "our old standard of not having really a genre and just kind of like following whatever vibes sort of entrance us in the songwriting and recording process," Phipps says.

The purple monsters are firmly in Wampire's past. But although Wampire can still be counted on to make us laugh from time to time—"We're gonna have that humor running through stuff that we do for a while," Phipps says—they're choosing to not let it be their identity, and keep listeners guessing.