War Is Hell. So Is Inaction

Without knowing what the end game is in Afghanistan, why do it? 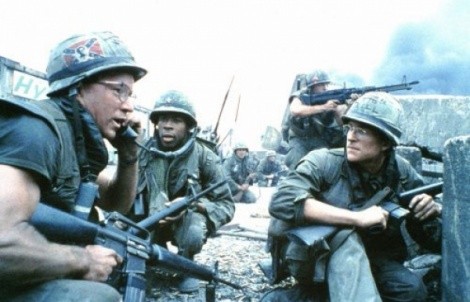 I don’t know firsthand if war really sucks or not, as I’m nonmilitary. But from what I’m told by my friends and family who did serve—most of whom are also Vietnam combat veterans—war does, indeed, suck. They nearly universally agree that war can be fun, too, but not during combat. They also often admit they couldn’t tell you how fighting for a piece of that rice paddy in Vietnam equates to a more secure USA.

All good soldiers to a man, they fought as good soldiers do. But it’s not the soldiers who have it wrong about war—either good or bad wars. During the Vietnam era, it was common to hear that we had to stop Communism from spreading throughout Southeast Asia like dominoes. If South Vietnam fell to the Communists, it went, soon Cambodia would, too. And Laos. And Thailand. And the next thing you know, we’d all be speaking Chinese.

For the nearly 20 years that the United States had ground troops or advisers in Vietnam, Domino Theory arguments ruined many a family Sunday pot roast. More than 30 years after the United States’ departure from South Vietnam in 1975, the world map shows a unified Vietnam. Laos, Thailand and Cambodia also remain with unchanged borders. In hindsight, the Domino Theory looks like malarkey. It was really an explanation for us staying in Vietnam—you will be hard-pressed to learn from any person or text why we got into Vietnam in the first place, nearly 10 years before the Gulf of Tonkin incident that led to full-scale escalation of the Vietnam War. Give the calendar 20 years, and it’s a safe bet that you’ll not be able to tell your kids why we went to war in Iraq or Afghanistan, either.

If war sucks, the reasons for war suck equally. Like a carnival arcade game, for every war theory that gets whacked, a new one rises to take its place. Besides the moving targets of why we went to Iraq and Afghanistan, a modern true believer in the Vietnam War, as often as not a neo-con, justifies it by claiming the war distracted the Russians so much, it led to the downfall of the USSR. Well, OK, but since that theory is revisionist and also made in hindsight, I doubt a single of the 58,195 soldiers killed in Vietnam ever heard that one.

Besides the time-honored traditions of dying with valor, for the unit, for their friends, for the causes they believed to be just and right, what exactly did those men and women die for? It wasn’t real estate— even the bloodiest hills and battle sites were quickly abandoned. It wasn’t for a democratic Vietnam—we may have called the elections democratic, but behind the scenes we nixed that system in favor of puppet governments and regimes. I don’t arrive here with the proper cred, so it’s best to let someone else ask the openended question of what our soldiers died for. That someone is a Vietnam-era, U.S. Navy vet, Joseph Allen McDonald.

Here’s how he put it in 1969 at Woodstock with his band, Country Joe & the Fish (apologies to Joe, but “Vietnam” has been changed to “Afghanistan”):

Aw, c’mon all of you big strong men, Uncle Sam needs your help again. Got himself in a terrible jam, way down yonder in Afghanistan. Put down your books and pick up a gun, we’re gonna have a whole lot of fun. And it’s one, two, three, what are we fightin’ for? Don’t ask me, I don’t give a damn, next stop is Afghanistan. And it’s five, six, seven, open up your pearly gates! Well, there ain’t no time to wonder why, whoopee, we’re all gonna die.

Additional verses condemned Wall Street’s connection to the war (today, Halliburton) and career generals who only cared about their prestige. The song ends with a rejoinder for parents across the land to send their sons off to war so they could be first on the block to “have your boy come home in a box.” Nearly 40 years later, Bill O’Reilly, who should have served with McDonald but avoided the draft via school deferments, would compare McDonald to Fidel Castro. That’s some kind of thank-you for helping to end an unpopular war.

We once said, “Never again!” No more Vietnams. But we’re heading for one. Democrats and Republicans are itching for a fight with one another, even if it means sending your kids to Afghanistan so they can score political points at home. War is in the headlines. Another Utah soldier has died in Afghanistan, and 14 more Americans died yesterday and 8 more today. Maybe that’s not enough to rile you, but neither did the headlines in the early 1960s, when we were also preoccupied and not paying attention to the war building momentum half a world away.

Later, the real headlines came: Ia Drang, 1965—234 U.S. dead in four days; Dak To, 1967—376 dead and missing; Hue, 1968—142 Marines and 74 Army dead. Other terrible battles were fought, and fought again, at Khe Sanh, Con Thien, Chu Lai, Pleiku, Kontum, in the A Shau Valley, the Central Highlands, the Mekong Delta, and the Iron Triangle. I can only hope that names such as Zabul, Oruzgan, Kwost and Ghazni—sites of previous battles in Afghanistan and of more to come—don’t end up with the same terrifying resonance as those Vietnam battlefields.

It’s decision time for President Obama—and you. More war, or no war. Less war doesn’t cut it. Utah’s national representatives—except Rep. Jason Chaffetz—support sending more soldiers to die in Afghanistan. Chaffetz says he’s not sure what victory looks like in Afghanistan. He’s right. They didn’t know in Vietnam, either. Without knowing what the end game is in Afghanistan, why do it 58,000 more times?

Should Obama get in with full force or get out of Afghanistan?