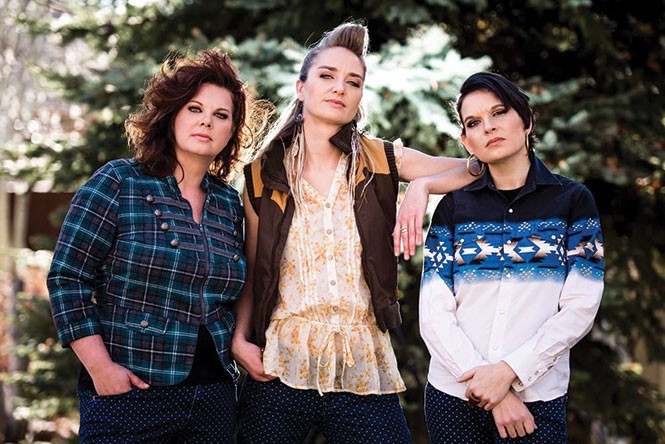 "We want to prepare for this interview a little bit, if possible," Canyons drummer Hillary McDaniel texted the night before we met. "Do you know what your story is going to be about?"

That's one of the most endearing things about the folk-rock trio of McDaniel and guitarist-vocalist-songwriters Secily Saunders and Kate Anderson. First of all, they're warm people, huggers—and this sincerity infuses their earthy, vivid songs. Also, they're unassuming, genuinely baffled by the attention they've received, including their nomination for Best Folk Artist in City Weekly's Best of Utah Music 2016 (they finished second, behind their friends Folk Hogan) and becoming an in-demand live act, since forming only a year ago.

Behind the Urban Lounge, where the trio plans to see Mexican garage punks Le Butcherettes later on, McDaniel and Saunders, a couple, sit opposite each other at the orange picnic table behind the club's back patio. Anderson, tall with a long ponytail, sits cross-legged on the tabletop, not minding the bird mess. (She's tough—her day job is flying choppers for the Utah Army National Guard.) Saunders wears a trucker hat that says, "#indoorsy." They crack jokes and laugh readily. Any anxiety they may have had about the interview seems to have melted away; even if it hadn't, they shouldn't worry, because they're good on the fly.

In fact, that's how they came together. In May 2015, Anderson, a recent transplant from Reno, Nev., met McDaniel (formerly of Please Be Human and Palodine) and Saunders (The Vision, Elytra, GrapeGrass and, formerly, Talia Keys and Debi Graham). Having booked a tour, Anderson invited her new friends to come along and back her up. A full-time musician, Saunders went, along with guitarist Tim Neu (who left the band in August). McDaniel agreed to join, but had to stay in town for work. Upon their return, they chose a name by looking out their car window, and started to gig.

As they played around town, they befriended a crowd of local musicians, including Jordan Young of Candy's River House. The new connections led to booking more and more shows. Last year, they released an eponymous, five-song EP so they'd have something to "show the clubs."

"We're surprised that anyone gives a shit," McDaniel says. "What is it that we have to say—do we have something to say?" interjects Saunders.

McDaniel picks it back up. "I mean, I like our music, but I've been in a lot of bands where I like my music. And it's just weird to get attention, basically, without trying too hard to whore myself. ... That's why we were like, 'What's this story about?' Did you hear something about us?'"

"Is this about our embezzlement?" cracks Saunders.

Just as with their origin story, Canyons' success boils down to right-place-right-time. They were a Christmas miracle, so to speak. Compiling picks for City Weekly's "Live" column gets to be difficult at the end of the year and, naturally, the pickins were slim for the Dec. 17, 2015 issue. But a show at the Garage on Beck, with a Crayola-made poster, seemed promising: "A Festivus for the Rest of Us," featuring a pair of local bands: Canyons, and Six Impossible Things.

Soon, via Canyons' ReverbNation page, the first tones of "Solitary Trees" burned through the winter gloom. Over acoustic guitars and piano, Anderson clearly and sweetly sings, "I can't be created/ I can't be destroyed/ I'm the root of hatred/ I am tears of joy/ I am lightning/ I'm a hole in the sky." Here, Neu joins in. "Put your neck to my neck/ and we'll harmonize/ You sing a C/ I'll sing an F/ and I'll give you my heart/ if you give me your time." Suddenly, it felt as though the scene outside had shifted from dull gray to earth tones, blues and flickering ambers—and it was warm.

The scanty bio on CanyonsMusic.com says, "Canyons ... wants you to feel." The succession of songs that followed "Trees" each evoked a range of emotions, reactions and sensations: regret ("The Fare"), playful lust ("Don't Force It"), astonishment at unconditional love ("Pages") and wistfulness ("Washington Road"). They all, for various reasons, cause eruptions of goose bumps.

Anderson says she likes to watch fans react to the first measures of "Washington Road" by quieting down and focusing on the lyrics. "Pages" is another fan favorite—and one the band liked enough to re-record for their brand-new four-track vinyl EP, Sometimes Late at Night. The new songs "January," "Ohio" (with Saunders singing lead) and "Once" find the band's harmonies sweeter, their lyrics even more compellingly relatable.

Which is fitting. From the beginning, Anderson, McDaniel and Saunders feel real—you sense that any time invested with them or their music is well spent. They want you to feel and, in return, they're likewise emotionally accessible. At the end of their shows, Canyons performs an a cappella tune (a cover of Sandi Thom's "I Wish I Was a Punk Rocker"), coming down from the stage to seal their connection with the crowd.

If they still need to know why people "give a shit," well, that's it. They'll give you their heart if you give them your time.