Is eating soap bad for you? 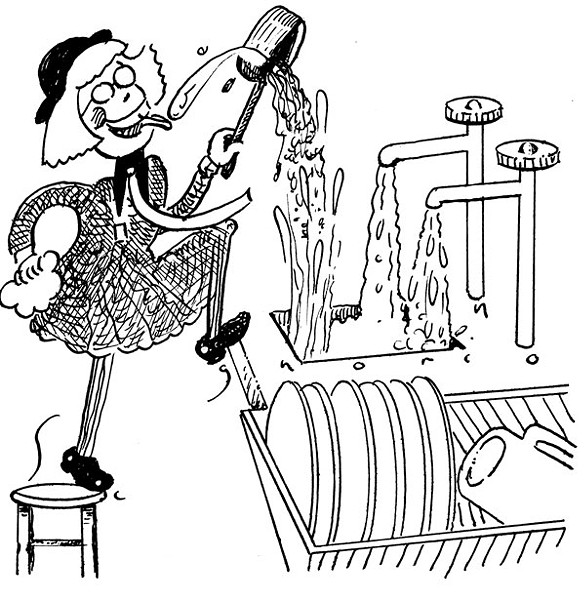 I was talking to someone at work who recently stayed with relatives in England, and was surprised when she told me sometimes her mother’s food tasted like soap because her family didn’t rinse dishes after washing them—they just set them in a rack to dry. She said everyone does it that way in England. Is that really true? Wouldn’t eating soap be bad for you? —Amanda Wyman, Rhinelander, Wisconsin

I had, of course, heard U.K. horror stories about bad teeth, inedible food, chilblains stemming from constant damp, ineffectual plumbing, football hooligans, shoddy automobiles, truculent unions, standoffish people, and general torpor and decline. However, on visiting the kingdom recently and finding it (or anyway London and Oxfordshire) entirely up to date, the weather fine and the citizenry charming, I figured such talk was lingering bad PR stemming from shock at loss of empire, and that tales of un-rinsed dishes were likewise a vestige of the past. I said as much to my assistant Fierra, who, despite having developed an inexplicable fondness for American muscle cars during her time in the U.S., proclaims her English origins every time she opens her mouth.

Fierra made an expression that bore a resemblance to a smile. “Let me share a story,” she said.

“Back when I was in Brownies, they had a Housework badge. As part of our Housework badge, we had to know how to wash up and dry dishes. They taught you to run hot water with washing-up liquid into the washing-up bowl and wash from least dirty to most—so to start with the glassware, and then the cutlery, after that any cups, side plates and bowls. Then on to the main plates that held greasy food like roast meat, roast potatoes, etc. After that, you’d go on to the pots and pans, with the roasting tray or casserole dish being the last. All the dishes would go on the dish rack—you would dry off whatever didn’t fit on the rack, but you certainly wouldn’t rinse anything. Only if the water turned into soup you might swap it out entirely, or you might put some of the pans or really nasty dishes to soak, then wash them later with fresh water.”

“They gave a badge for that?” I asked.

“And I am to understand that this was the standard of hygiene that, in the days before shared housework, was placed before the future homemakers of Britain as a model to emulate and admire?”

“And it has occurred to no one in England that leaving soap on the dishes means you taste it with every meal?”

“So you say. I never tasted it, nor did any of my family and friends. It only seems to be Americans who are complaining about our dishes.”

“I don’t wish to be disrespectful. However, a country that gives its traditional dishes names such as ‘toad-in-the-hole,’ ‘bubble and squeak’ and ‘spotted dick’ isn’t setting itself a high bar, foodwise.”

“The country that gave the world super-sizing, and where waiters routinely ask ‘Are you still working on that?’ as though you were digging a ditch, is hardly in a position to complain.”

“Surely Britons rinse off when they shower?”

“They do, but normally one doesn’t bring in the dishes when one showers. In any case indoor bathrooms were a luxury in the UK until the 1960s, and showers didn’t become common until the 1980s. Before that, one took a bath, and the nature of a bath is such that you were often left with some residual soap.”

“And no one minded.”

“It depends what you mean by minded. We’re a frugal people, only recently arrived at wealth, and then mostly in the southeast of England. We’ve grown up making do. Only about four in ten homes have an automatic dishwasher, compared to 78 percent in the U.S. In Britain, water and heating costs are higher, sinks are smaller, and rather than two bowls served by a single mixing tap, we usually have a single bowl with two spigots, all of which makes rinsing difficult. Even so, of Britons who wash dishes by hand, more than 60 percent rinse them afterward.”

“There you go,” I said. “By your own account not rinsing was once the default national practice, and now it’s receding into history. Soon this disgusting habit will be at an end, and with it the risk of gastroenteritis the next time some Brit invites you over for shepherd’s pie.”

“Nonsense,” said Fierra. “Whatever the theoretical risk, there’s no evidence of any health consequences arising from British dishwashing methods.

“Let’s put this in perspective. All societies have their quirks. Britons aren’t much for rinsing dishes, while in the U.S ... well, let me put it to you: What would you rather endure—the occasional taste of soap, in the opinion of some, or a lifetime of insipid cheese, chocolate and beer?”