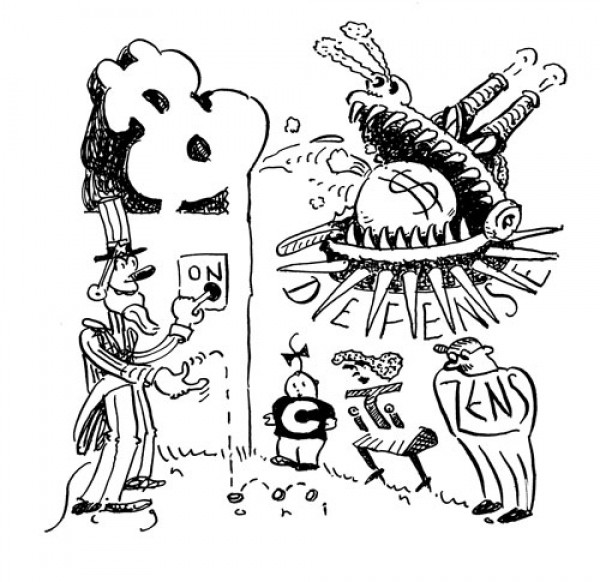 I need a good answer for a question from a politically conservative friend. When I pointed out that federal tax rates were higher in 1955 for everyone from the poor to the super rich than they were in 2010, his response was: “Are these taxes spent more wisely today than they were in say, 1955? Or rather, is our federal government spending tax money more or less efficiently now than then?” —Thomas Holton

Right, like there’s some accepted standard of what constitutes wise or efficient spending. I guarantee you some people think putting one dime into the EPA, the Department of Education, or for that matter the U.S. Marine Band is a foolish waste of funds. Better we just look at how the federal spending breakdown has shifted over the years. You and your friend will still argue fruitlessly about whether that’s good or bad, but at least you’ll start with the facts.

The highest marginal rate remained at 91 percent until 1964. Let that marinate for a moment. During the entirety of what conservatives typically regard as the good old days, the high-end tax rate was close to the highest in U.S. history.

After spending nearly two decades at 70 percent, the top rate fell significantly during the Reagan years, bottoming out in 1988 at 28 percent. Today, notwithstanding the machinations of the tax-and-spend element, it remains just 39.6 percent.

Now to your question. Having scoured the databases, we learn as follows:

• In 1900, the federal government was pretty much the definition of lean and mean. More than 30 percent of the budget went to defense, with an additional 22 percent to veterans’ benefits. The U.S. Post Office, as it was then known, ate up another 17 percent, and 6 percent went for interest on the national debt. That left just 24 percent, allowing for rounding errors, for all other government activities.

• By 1920, defense had ballooned to nearly 70 percent of the budget and interest to 15 percent. OK, World War I had just ended. Still, when 85 percent of the government’s money goes to the military plus debt, you have to think: the priorities here are seriously askew.

• By 1955 defense was still nearly 55 percent of the government’s budget, with pensions plus social security in second place at 7 percent. Healthcare, education, welfare and transportation all together accounted for less than 8 percent of all government spending.

• In 1980, after Vietnam but before the Reagan military buildup, the budget was more balanced. Defense was still the largest share of expenses, at 28 percent, followed by pensions and social security at 23 percent and one of the highest percentages of funding ever for the Department of Education, at 6 percent. Healthcare rose to 9 percent, reflecting a trend of steady increase that started in the 1950s and hasn’t ended.

• In 2010, healthcare passed outlays for pensions and social security, with the two together accounting for 47 percent of the budget. Defense still takes a quarter, and welfare a seventh. The postal service, which took 26 percent of the budget in 1910, is pretty much a nonentity. Education takes up about the same percentage of the budget as it did in the 1940s. Interest on the debt, thanks to low rates, is only 6 percent, compared to nearly 15 percent in 1990. But 1990 wasn’t the worst it’s been; on a decade basis, debt interest was a greater percentage of the Federal budget in 1920 and 1930.

What can we say about the wisdom of government spending through time? For most of a century we sank most federal treasure into defense, sometimes to the exclusion of virtually all else. Only in relatively recent times have we invested in programs to help people.

Your friend may say: National defense is worth it, whereas coddling the sickly is a waste. Anecdotal insight into this issue comes to us from the annual Wastebook published by Oklahoma Republican senator Tom Coburn. Reading through Coburn’s 100 examples of squandered federal cash, we notice the money supposedly wasted on social and cultural programs is for relatively small amounts—for example, $1 million for the Popular Romance Project funded by the National Endowment for the Humanities. The biggest boondoggles, such as the scrapping of $7 billion in leftover military equipment in Afghanistan, were for defense.