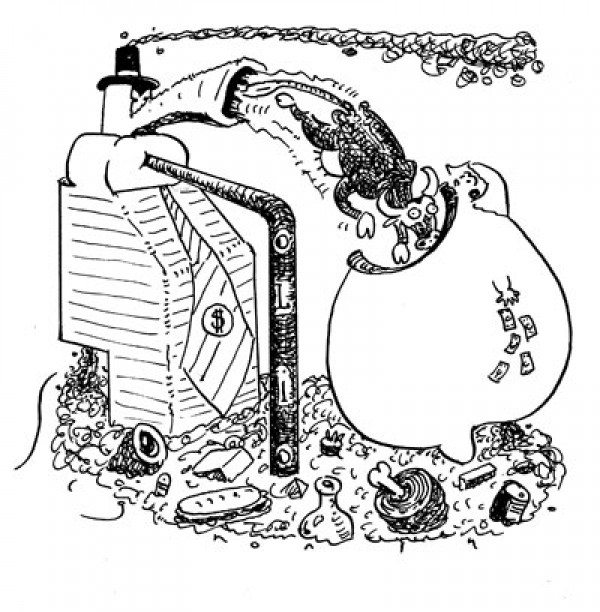 I’ve read that 5 percent of all energy used in the United States goes into the production and transportation of food that eventually gets thrown away. That sounds like a lot, but then again, people can be mighty wasteful. Is this accurate? —Roger in Minneapolis

It’s in the ballpark, but that doesn’t mean that if we all finished our broccoli, we’d lessen our dependence on foreign oil. The real story is that the higher you go up the food chain (and to a considerable extent, I mean that literally), the more energy-intensive food production gets. This isn’t an argument for veganism or eating healthy, which isn’t to say you shouldn’t do those things. Rather, the question is: do you like civilization? OK, but it comes at a cost.

Of the studies I found discussing energy loss from wasted food, by far the most comprehensive was a USDA report called Energy Use in the U.S. Food System. In 2002, according to the USDA, food production consumed more than 14 percent of U.S. energy; by 2007, the agency estimated, food’s share had risen to nearly 16 percent.

Several things are notable about these numbers:

• First, in the short term, they reflected a sharp rise in per-capita U.S. energy expenditure on food—more than 16 percent.

• In the 1970s and ‘80s, food’s share of energy use averaged 15 to 16 percent. In other words, looked at over a span of 40 years, the percentage of energy Americans collectively expend on feeding themselves has barely budged.

We’ll return to the significance of that in a moment. But first let’s tackle your question: how much of the energy that goes into food is wasted?

The USDA estimated that in 1995 27 percent of all edible food in the U.S. was wasted at the consumer level. More recent studies have come to similar conclusions: a 2002 report estimated waste at 26 percent, and a 2009 study claims 29 percent.

That’s pretty bad compared to other developed countries. Consumer food waste is about 22 to 25 percent in the UK, 8 to 11 percent in the Netherlands, and 9 percent in Turkey. Nonetheless, as a general proposition, it’s fair to say poor countries waste less food than wealthy ones, and that as per-capita income rises, so does waste. China is a good example. While Chinese food statistics are no model of precision, one guess is that the percentage of rice and wheat wasted in the country’s restaurants was around 2 to 7 percent circa 1995, but anywhere from 9 to 25 percent in 2008.

Getting back to the U.S., if we estimate food energy share at 14 percent and food waste at 27 percent, we find about 4 percent of U.S. energy goes into wasted food, not far off from the 5 percent figure you cite.

That number may be high. Other studies using different methodologies put energy losses on food at around 2 percent. The financial consequences in any case aren’t trivial—anywhere from $48 billion to $124 billion.

No one would claim there’s nothing to be done about that—as I say, many other affluent countries don’t waste anywhere near as much food as the U.S. does. From a big-picture standpoint, however, there may be limits to how much of the energy budget used on food—and I mean the global energy budget—can be reduced. Here’s how the argument lays out:

1. Notwithstanding sizable short-term fluctuations, the fraction of U.S. energy expended on food now is about the same as it was 40 years ago.

2. To oversimplify, in less developed countries, more energy is expended at the beginning of the food production chain and less at the end, whereas in the developed world it’s the other way around. In largely rural economies, farms are small, production methods are relatively primitive and inefficient, and waste due to losses in storage and transit is high.

3. In the developed world, in contrast, industrialized agriculture—however much some may criticize it—produces a considerably larger harvest per unit of energy expended. Where energy use goes up is in the later stages of the process. Demand for meat (which is inherently energy-intensive to produce) is typically greater, food is subject to more processing, and affluent consumers simply throw more food away.

4. Does that mean that as a country gets richer, the fraction of energy it spends on feeding itself stays the same? That’s more than I’m prepared to claim without a lot more research. Let’s just say it seems to fluctuate less than you’d think.

The point of all this isn’t to excuse wasteful U.S. practices. Tossing out a shockingly large portion of the country’s food output doesn’t result from some implacable law of economics; it’s because we’re pigs. I simply make the observation that, as the world becomes more affluent, the amount of energy we’ll need to feed ourselves won’t necessarily rise to catastrophic levels. But there’s also little chance it’ll go appreciably down.