You see trash. Someone else sees a way to stay alive.

I did some dumpster diving back in high school, though we didn’t call it dumpster diving. We didn’t call it anything, really; we were just kids who would occasionally come upon awesome trash. In my limited exposure to trash exploration, it was an occasional opportunity to feel like urban archeologists and get an Indiana Jones-like rush from uncovering something pointless, like an old Tom Clancy paperback. There were no Earth-saving agendas, just the thrill that comes from finding free stuff.

But for some, dumpster diving is all about awareness—a way to defy the system and make a statement about consumerism and the abundance of waste. And, for many people—perhaps more than our sustainable-minded yet squeamish society would like to admit—dumpster diving is a necessary part of life. There will always be people who really need the things that are thrown away.

Dumpster diving received a lot of attention in 2010, when filmmaker Jeremy Seifert released the award-winning documentary Dive! Focusing on the dumpsters behind chain grocery stores like Trader Joe’s and Whole Foods, the film takes a hard look at our nation’s waste culture and how perfectly good food is tossed away every day.

“If you can, go dumpster diving,” Seifert says in a phone interview with City Weekly. “Because when you eat trash, something changes in how you see the world. It changes how you see food, how you see trash and what trash is.”

Dumpster diving wouldn’t exist at all without our country’s and our communities’ bad habits. People choosing to toss things in the trash rather than donate them—or use the items themselves—means that the bins behind restaurants, grocery stores, strip malls and apartment complexes are where some Utahns are forced to find the means to survive.

The Diver
I wanted to meet a real Utah dumpster diver. Not a “freegan”—someone who chooses to live off of free crap—but someone who does it because they have to. And that’s how I ended up driving around Midvale at 1 in the morning with a guy I’d met on Craigslist.

Chris Forbush, who’d posted an ad calling for people to join in on some after-dark dumpster quests, doesn’t come across as your stereotypical dumpster diver. To be honest, I’d still been expecting a trustafarian with dreadlocks, maybe wearing a faded Umphrey’s McGee T-shirt. Instead, Forbush is a tattooed bro who rocks a shaved head and black T-shirts. He looks as if he would be more comfortable on the set of Rob Dyrdek’s Fantasy Factory than in a dumpster. 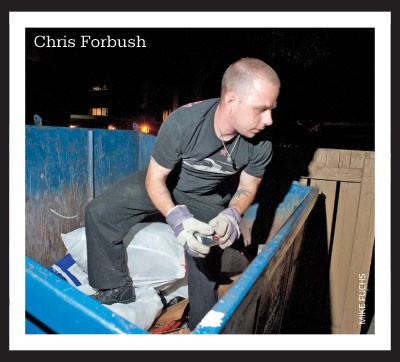 My buddy Mike and I met Forbush behind a Beans & Brews on State Street late on a Tuesday night in May. To save gas, we all piled into Forbush’s car and, from that point on, we went wherever he wanted to go. That evening, he was our Midvale dumpster guide, and he knew exactly where he was going.

Forbush isn’t a full-time dumpster diver. During the day, he delivers pizzas. As he zigzags across Midvale delivering pies, he jots down valuable information about back-alley dumpsters. He has a notepad filled with addresses, dates, and words and phrases like “wooden pallets,” “plastic pails,” “metal sheets,” “kitty litter” (that means the dumpster is a no-go), “someone just moved out of an apartment.”

“I’ll be sure to come back after work and check out these spots for anything good,” Forbush says as we park the car behind a car wash.

“Most of the time, the trash cans at these things are filled with recyclables—people get lazy when they’re cleaning out their car,” he explains as he pulls a soda can out of the garbage and tosses it into a plastic pail.

Forbush is looking for whatever translates into cash or food for his family’s table. Anything helps; household items that aren’t broken can be sold on KSL for a few bucks, rotten food gets tossed on his compost pile, and a few bags of recyclable cans can equal a partially paid phone bill. Though it’s not much, Utah’s recycling centers pay 29 cents per pound for aluminum cans.

Forbush’s wife also works full time as an assistant manager at a local sandwich shop, but Forbush says their two incomes barely allow them to support their two kids. I ask him if they’ve tried to do something other than finding recyclables and flipping stuff on KSL to supplement their income. But, Forbush says, when you have a 4-year-old son with cystic fibrosis, things can get complicated.

“If I were to pick up another job, it would shut off my son’s Medicaid, and his medicines are extremely expensive,” Forbush says. “Even right now, we make too much money. We can’t even get food stamps. It’s like, what do you do? I can take in some cans, and from the money I get from that I can pay a bill.”

In terms of coming across anything of value, the car wash is a bust, so Forbush decides we should check out a large apartment complex nearby.

On the drive over, he reminisces about the first time he was introduced to dumpster diving. “I was in D.C. back in 2007 at the World Bank protests and I was hanging out with these anarchists,” Forbush says. “We were walking through the subway talking about getting something to eat, and this kid just reaches into the trash and pulls out some grub. It kind of blew my mind at the time, but he was like, ‘Yeah, there’s plenty to eat in the trash.’”

If you’ve spent more than five seconds near a disgusting dumpster, the prospect of touching anything that came from one, let alone climbing inside and pulling out something to eat, might seem unthinkable. We live in a highly sanitized society. In a memorable Seinfeld scene, Jerry criticized George for eating an éclair that was merely “above the rim” of a kitchen trash can. But not everyone has the luxury to turn down food, whether it’s hovering above a trash can or is on the very bottom. 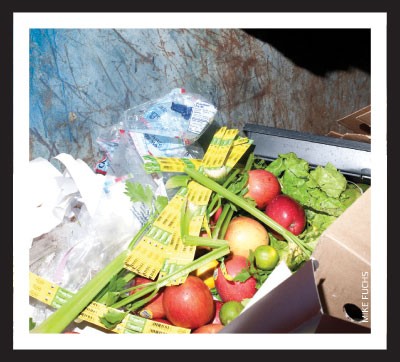 Forbush doesn’t typically eat out of the trash unless there’s no doubt in his mind the food is safe for consumption. “I once found, like, 20 pounds of apples all wrapped in plastic containers behind Good Earth. They were totally fine,” Forbush says. “I didn’t want to let ’em go to waste, so I washed ’em, threw ’em in my backpack and went down to the TRAX station and handed ’em out. No one cared they were from a dumpster, and besides, people got to eat that day.”

But just because food from a dumpster appears to have nothing wrong with it, that doesn’t mean it’s safe to consume. The U.S. Food & Drug Administration’s website posts national food recalls that happen almost daily. Some recalls are for something simple like undeclared peanuts, but it can also be for severe health risks like salmonella or Hepatitis C. To make matters even more complicated for dumpster divers, retailers are often told to toss the contaminated food in the trash.

People Will Throw Anything Away
We roll into the apartment complex and get out of the car. Forbush puts on a pair of gloves, flicks on his flashlight and starts scoping out a row of dumpsters hidden behind an unlocked fence.

Not every dumpster is worth exploring. The smell of a bad dumpster interacting with your gag reflex will indicate within seconds whether or not something has died in there, or that it’s where someone throws their dog’s feces. The first dumpster we come across has a very identifiable stank of burnt Band-Aids. But that’s the game you play. When we open the second dumpster, Forbush gets excited.

He has a methodology when it comes to dumpster diving. Watching him sift through trash is like watching a character from Storage Wars. “A dollar!” he proclaims after pulling something out. “Four dollars!” he yells again. He seems to enjoy every minute of it.

Forbush also follows the three rules of dumpster diving established by Seifert in his film Dive!: 1. First one to the dumpster has dibs, but you should always share; 2. never take more than what you need; 3. always leave the dumpster cleaner than how you found it.

While carefully sifting through the mess, Forbush points out how you have to be careful when dumpster diving. “I take a lot of caution when I’m out here,” he says. “I make sure to look at the scene first; I would hate to jump into a dumpster and get stuck with a syringe.” 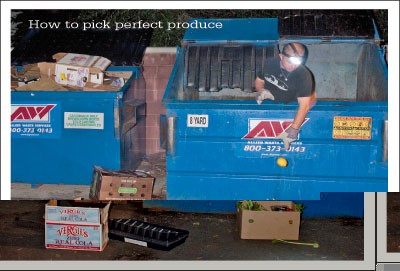 He reaches down and pulls out a lamp with multiple light fixtures. “I consider myself a garbologist in a way,” he says. “I guess I study our society by what we throw away. Look at this lamp—there’s probably nothing wrong with it. If it doesn’t work, I bet I could turn it into a neat art project or something.”