Tone your bod at the water park 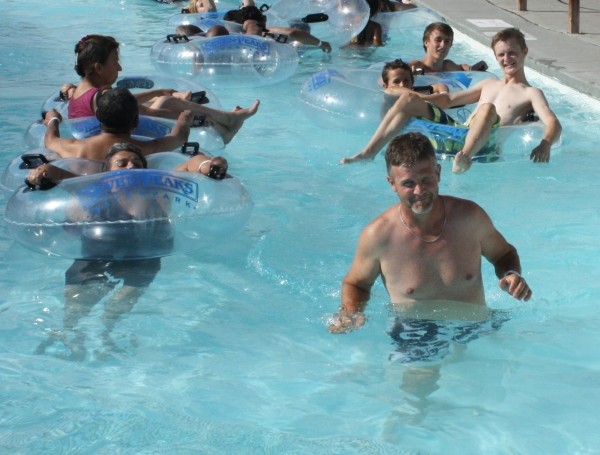 The record-breaking heat has left you with no desire to hop on your bike, hike or play any outdoor games. Yet you don’t want to turn into a slug just because it’s so hot outside.

The solution? Try a water park. No need to sweat in the gym or under the sun; a great day of hard and very enjoyable exercise is waiting for you at the two Seven Peaks water parks (formerly Raging Waters). There’s one in Salt Lake City and another in Provo. And it’s fun for both adults and kids.

The workout comes primarily from the hundreds of stairs you’ll have to climb to get to the top of the slides. With each step, you’re hoisting your entire body weight with first one leg, then the other. It’s more physical work than a treadmill or jogging. But one of the biggest pluses is that it’s a great fat burner. Each minute of stair climbing burns about 10 calories, so a mere half hour of quick stair climbing, which is only about four or five slides, will burn up to 300 calories.

You won’t get overheated from stair climbing, even on the hottest day, because your body is thoroughly cooled off by riding down the slides and splashing into the landing pools. The exercise is both aerobic and anaerobic, meaning that you get both cardio and muscle-building benefits out of it.

You may be having so much fun that you won’t want to stop to take a rest. Still, put a blanket or towel under one of the shady trees and force yourself to take a break every 40 minutes or so. It’s easy to get overworked at a water park.

Don’t limit your workout to just stair climbing. There are 16 water attractions at the parks, including two large pools of water that allow you to use water resistance to work your core or upper body. One is the Tidal Beach, which offers frequent three-foot wave sessions of splashing water, alternating with periods of calm. The other is the Amazon River, a 1,200-foot-long meandering “river” of water with a 5 mph current. You can swim or use your arms to push your body through the water of the Tidal Beach to work your arms, or walk against the current in the Amazon River to work your core.

The best thing about water-park conditioning is that you control the degree of the exercise. If you’re fit enough, go up the stairs or through the pools of water quickly to get more of a workout. But start out slow until you know how your body responds to this vigorous type of training.

However, a day at the water park can be expensive. The day pass is $24.95 for adults and $19.95 for children under 48 inches tall. It costs $5 to park your car in the parking lot, and another $5 for the plastic inflated tube needed to ride the slides. There’s a solution to that: Purchase the “Pass of All Passes,” which is a good bargain for those who will go to Seven Peaks more than three times.

The Pass of All Passes costs $79.95, with an additional $20 to include tube rental and another $20 for parking. If you purchase both extras, their total cost is lowered to $30. But you can cut even that cost down by searching deal websites.

Trying to telephone the parks is a hassle; it’s hard to get to a human. Instead, go to their website, SevenPeaks.com, for more information.