We Got Brad's Back 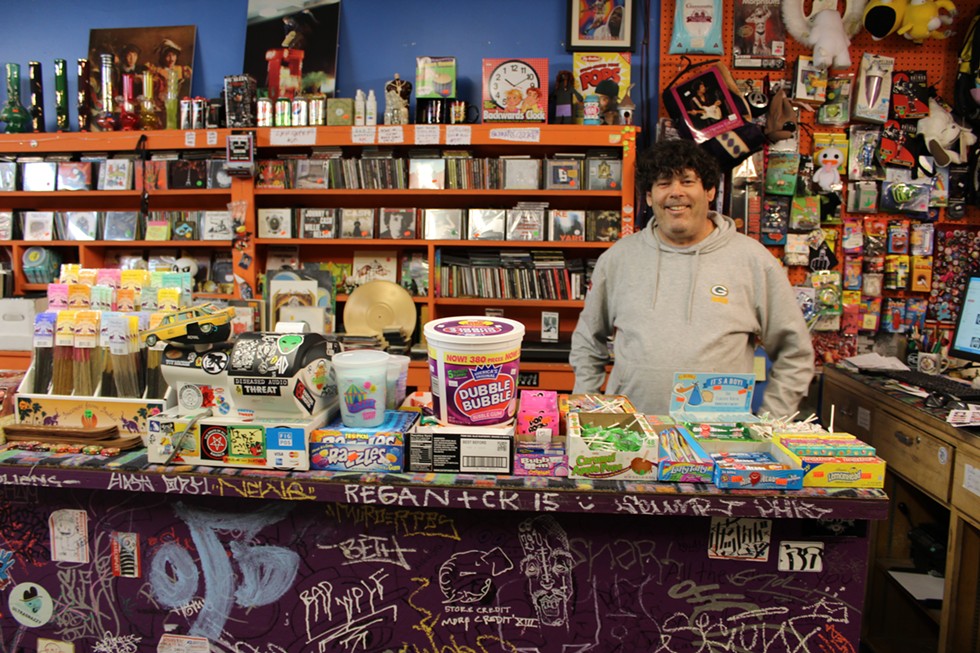 If you need any more affirmation of Raunch Records' revered place in Salt Lake City, look no further than the underground community's response to the news that founder Brad Collins has bladder cancer. Last month, Liquid Joe's hosted a golf and rock benefit that raised thousands, and on Friday, Sept. 21, a wide array of artists, skaters, punk rockers and business owners will come together for another benefit at Edison St. advertising agency Super Top Secret.

Fiz Bradshaw and Brian Taylor of Copper Palate Press teamed up with local icon Davey Parrish to spearhead the event. First, Bradshaw procured 50 blank skateboards through Raunch before distributing them to some of Salt Lake City's best artists, including Sri Whipple, Trent Call, Cameron Bentley and Dave Boogert. Those one-of-a-kind pieces are up for silent auction while bands like Darklord, Neutralboy, Sad State of Society, Lube and Ulteriors rock the brick-walled, warehouse-like space and DJ Nix Beat spins his mid-century modern classics. At the center of it all is Super Top Secret's in-house mini-ramp, which is usually reserved for the firm's employees but will be open to all on Friday night.

Bradshaw says the initial response has been astonishing. "I created the event, invited nobody and now there's 300 people on the email list who either want to come to the show or contribute a skateboard," she says. "As soon as people realized there was an opportunity to make art and support Brad, they were stoked."

Collins first made a name for himself with the influential KRCL 90.9 FM radio show Behind the Zion Curtain. He founded Raunch Records in 1983 and operated it full time through 1997 before taking a hiatus that ended in 2009, when he reopened at his current Sugar House location. Throughout that time, he's influenced Salt Lake City's underground culture immeasurably, slinging skateboards, records, zines, posters, T-shirts and stickers while transforming Raunch into a safe space for those otherwise pushed to the margins.

Collins says he's overwhelmed by the ongoing support. "When Liquid Joe's did their event and then Fiz and Davey started making this thing happen, I was kind of overwhelmed," he says. "It's a huge honor and a tribute to the people of Salt Lake City. I mean, Fiz wasn't even alive when I started doing Raunch in the old days. Plenty of my friends have been through troubles without getting this kind of response, so sometimes I feel a little guilty. It's weird for so many people to be on your side in these situations."

It makes perfect sense to those who treasure Collins and what he represents, however. Jared Strain, partner and co-founder of Super Top Secret, says he jumped at the chance to host the event. "This aligns perfectly with who we are and what we believe in," Strain says. "When we got the phone call to get involved, it was a no-brainer. I said, 'Absolutely, open the doors, let's party.' The 16-year-old version of myself is ecstatic since it pulls on every one of my heartstrings: skateboarding, art, punk rock, Brad." Referring to Collins as a staple in Salt Lake's community whose influence speaks volumes, Strain adds, "When I go to Raunch and see kids traipsing around in the same Misfits and Nirvana T-shirts I wore as a kid, it blows my mind." Next door to Super Top Secret, Adam Tye of Diabolical Records is even more blunt: "Every part of the underground culture in Salt Lake City can be traced through Brad Collins and Raunch."

For Collins, the benefit's baked-in camaraderie is its strongest calling card. "That may not have existed in the old days," he says. "There are so many good people involved in so many businesses right now." Reminiscing about his own golden days wandering the aisles of '70s record stores like Tape Head Co., Wally's Records and Odyssey, he chuckles: "I'd like to think we've had something to do with all these guys' musical tastes."

That's certainly evident in the live music lineup for the event. Sad State of Society is anchored by Aldine Strychnine, also known as KRCL's Punk Rock Farmer, with Collins' longtime compatriot Davey Parrish on vocals. Neutralboy and Ulteriors both hearken back to punk rock's earlier, rowdier SLC heyday, while doom metal purveyors Darklord and Lube, Fiz Bradshaw's band, represent the new generation. "We wanted to make a point of getting all kinds of bands on this bill," Bradshaw says. "Brad's an icon, and everyone loves him, but what's really kept Raunch relevant is its involvement in youth culture. That sets Brad apart from some of the other older guys in town."

Collins laughs when he hears all this praise, deferring the credit back on the old-timers and young guns whose only loyalty is to Salt Lake City's small, independent businesses. Asked about his health status, he says he's still not sure whether he's fully out of the woods. His doctor, an old junior high friend, assured Collins that his cancer was non-invasive. But since he's still uninsured—the raison d'etre for the benefit—the punk lifer knows better than to assume victory just yet. "I don't have the best luck," he admits. "I feel pretty good about where I'm at, but I'm not quite ready to just kick back and not worry about it anymore."