Unconventional passions get a fast-paced showcase in IgniteSaltLake. 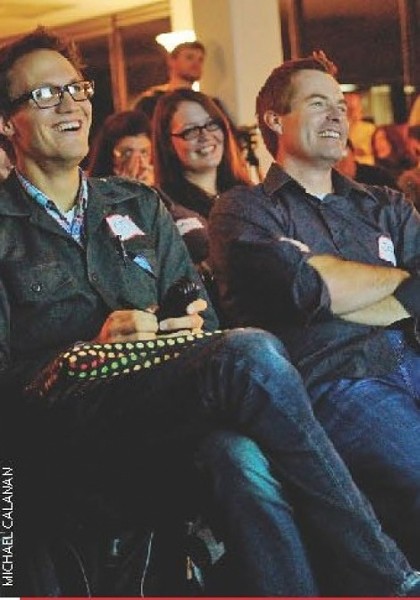 In our age of ever-shortening attention spans, we want every experience to aspire to the quality of television viewing, in which you can skip past anything that isn’t instantly stimulating, and everything is broken down into easy digestible chunks. Combine that with specialists from a wide array of disciplines and you have what seems like a combination science fair, game show and Mensa meeting. In other words, Ignite.

Ignite was started in Seattle in 2006 by Brady Forrest and Bre Pettis of O’Reilly Media, a publisher of books for computer programmers. Under the slogan “Enlighten us, but make it quick,” 16 speakers are given five minutes each, using a set of 20 slides advancing automatically every 15 seconds, whether the presenter is ready or not. Since then, hundreds of Ignite events have sprung up around the world, the most recent in Budapest.

Jesse Harding, a Web designer for Access Development, organized the first “IgniteSaltLake” last November at The Leonardo. The response surprised him, bringing out close to 100 people. The lineup of presenters offered an eclectic cornucopia of ideas, from “Have an Unbelievable Amount of Fun Making a Difference in Your Community” by Adam Price of the 337 Project arts organization to Jared Gallardo’s “How to Turn Christmas LEDs Into a 10,000- Pound Jellyfish From the Future.”

Harding was drawn to the concept of Ignite because, like its name, it sparks people’s obsessions. “Whatever your passions are, there are a few presentations you will fall in love with,” he finds. “I also like the pressure on the presenters.”

During the intermission, there‘s also “PowerPoint Karaoke,” in which several members of the audience take the stage and try to talk coherently about a group of random slides they haven’t seen before, for prizes. Organizers try to give the proceedings a sense of fun. For this second IgniteSaltLake, Harding was assisted in planning by Andrew Shafer, a software developer for Reductive Laboratories. This one will be at Brewvies, because using both theaters—with video feed piped into the second—the venue holds almost twice as many as the Leonardo. The event will also be streamed live on UtahFM.org.

The lineup contains entries that sound fascinating: Alen Peacock’s “A Robot Brain for to /Not/ Destroy Humanity,” Angie Jantz’ “The Story of a Rebel and His Bike: Why Pee- Wee’s Big Adventure Is the Greatest Movie of All Time,” and the Moran Eye Center’s Robert Marc with “The Twenty Senses.”

Along with practical concerns like Kyle Mathews’ “Building Social Networks for Learning” and Benjamin Kimball’s manifesto against Internet Explorer 6, there is some irreverence for technology with Jeff Jordan’s “Video on the Web: Big Freakin’ Deal.” Photographer Eric Hamilton—whose presentation is titled “How to Do Anything You Want and Get Paid for It”—says, “I’m into Ignite because it attracts many of my friends.

And part of networking involves communing not just online but also face-toface. Hamilton believes social networking gatherings are worthwhile because “valuable contributions to a community strengthen trust. Social capital is the foundation of brand equity.”

Organizers Harding and Shafer are hoping for another Ignite in late summer, and to continue with two or three events a year. Their only problem, with sponsors including XMission, Catalyst magazine and UtahFM.org covering almost all the costs of producing the event, is where to hold it next time if it keeps growing.

In the meantime, Ignite continues to fan the flames of these sometimes-unconventional passions and obsessions. One of Shafer’s favorite presentations from Seattle asked, “Why there isn’t the equivalent of a Burning Man online?” Maybe Ignite itself is, in a way, because it brings unconventional people together and lets the sparks fly.