Occupy Salt Lake: Where are they now?

“We Can Do Better”
When one group of Occupiers felt that the location and behaviors of the Pioneer Park camp were counterproductive to conveying their message, they made the decision to form their own camp. Seth Walker was one of them.

“We decided that we wanted to expand to highlight the economic points of what we were trying to do with the movement,” he says.

Walker says the splinter group decided to camp directly outside of the Wallace F. Bennett Federal Building at 125 S. State. “We started keeping a 24-hour place, around the clock, there, talking to people about what the Federal Reserve was, that it’s a private corporation and that a lot of its practices are not publicly controlled,” he says. They later moved to a nearby parking lot but were told by police to leave. Police Chief Chris Burbank offered them a space at Gallivan Plaza to continue their protest.

Lucero recalls Occupy Salt Lake as being somewhat splintered from the start. Rather than working together to create better solutions, many Occupiers became suspicious of those whose opinions differed from their own. “Among revolutionaries, there was a lot of disdain for the initial leadership as all being a bunch of liberals,” he says. “In turn, there was a lot of anger with people who considered themselves revolutionaries as trying to hijack this movement—as unconcerned with the working class, as pushing their own agenda.” 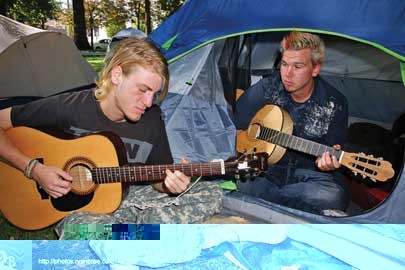 And if clashing opinions among members weren’t enough, Lucero says, the movement was further challenged by tense relations between Occupiers and Pioneer Park’s homeless population. “Every night, among the homeless people, there was a fist fight, there was domestic abuse, people stumbling through tents because they were strung out on something,” Lucero says. “Trying to deal with that was nearly impossible.”

Cordray’s experience with the homeless population, however, was much more positive. Working in the camp’s kitchen, she offered jobs to anyone who wanted to help out and saw profound changes in their attitudes. “It had been so long since anyone had considered them worthwhile enough to even do the dishes that these people would just sparkle. It was amazing,” she says. She appreciated the opportunity to understand what life is like for the individuals who slip through society’s safety nets. “It was like an opportunity to experience for myself the reality of what homelessness can do to people, and the indignity that people were experiencing.

“The way that we as citizens treat people who don’t have resources ... the way that our city treats homeless people,” she says, “it showed me all the things that we can do better.”

The Show Must Go On
Ultimately, however, creating political change amid the problem of homelessness proved tragic. Camp members were evicted after Michael Manhard, a 42-year-old homeless man, was found dead in his tent. Police say he died from drug use and carbon-monoxide poisoning. A propane heater and drug paraphernalia were taken from his tent. 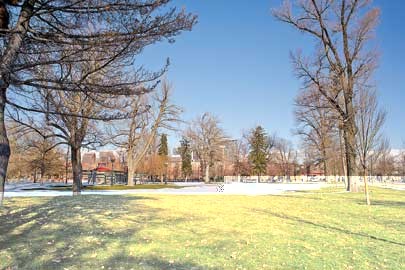 Carter, an organizer for Peaceful Uprising, had been only peripherally involved in the movement until the night of the eviction. “I felt that it was a complete injustice,” she says. “I felt like the city was just looking for an excuse, so they used an unfortunate incident—not the fault of the encampment—to get rid of it.”

She refused to leave during the eviction and was arrested. She had witnessed arrests of fellow Peaceful Uprising activists in previous demonstrations but had never experienced it herself. “With Occupy and with that raid and with the eviction of that park, something struck me at a really core level. I felt it was incumbent on me to do something more, to do something bolder,” she says.

The eviction took place just days before the scheduled debut of a play titled Why Isn’t Anyone Helping Her?!, about the death of the American Dream and democracy, co-written by Jessica Lee, a freelance writer who’d joined the movement because she was tired of feeling “helpless and hopeless.”

“The show must go on, and it did,” Lee says. The production debuted Nov. 14 at the Gallivan Center, where it was performed over the course of five days.

The narrative followed the murder of a personified American Dream by corporate fat cats in the style of Greek theater. Later, actors held mock trials of J.P. Morgan Chase and Goldman Sachs in front of their respective office buildings on Main Street.

No Sleep
At Pioneer Park, “there were a lot of incidents of violence and disorderly conduct,” former Occupier Seth Walker says, but at Gallivan Plaza, “we were extremely straight in self-policing, making sure there were no drugs, no alcohol. We stayed really clean-nosed at that site so that we could be more accessible to people who disagreed with us, and we were more approachable so people didn’t feel threatened trying to come in and express their curiosity.”

Just because they weren’t evicted doesn’t mean they didn’t face opposition from police, though. “With all the oppression that was kind of kicked up around it, the only thing that Occupy really had to fight against to make their voices heard was the local law enforcement,” Walker says.

He recalls multiple incidents where police officers entered the camp in the middle of the night, saying that new restrictions had been placed upon the Occupiers. Once, “an officer came out at 2 a.m. and started shaking tents down, saying he was going to arrest anyone he found asleep,” Walker says. When Walker confronted the officer about the new restrictions, the officer told him that he had been given direct orders from Deputy Chief Mike Brown that five people had to be awake at all times and that they were no longer allowed to have sleeping bags. Walker says protesters were later able to contact Brown who denied that he had given the orders and apologized to the group.

“Seth and I talked, I don’t know, some days five, six, seven, eight times on the phone,” Brown says. “There were always issues and different concerns.” Brown says the incident at 2 a.m. was a misunderstanding. “It was never that rigid. I think it was just a misunderstanding on an officer that was wandering through there one night making sure things were OK.”

Despite these challenges, the camp continued to operate at Gallivan Plaza until April 6, when members relocated to Library Square. By then, however, their already modest numbers had dwindled. “There was practically no one there,” Walker says. The few remaining Occupiers were gone by June.

Message Not Received
Tim Chambless, a political-science professor at the University of Utah, believes the Occupy movement ultimately failed.

Unlike historical movements such as the anti-Vietnam War protests and the civil-rights movement, Occupy did not succeed in changing any government policies, he noted.

When all was said and done, the political, social, and economic landscape of Salt Lake City, and the country as a whole, changed little as a result of the Occupy movement. Corporate fat cats were still profiting. Politicians were still focused on keeping their corporate contributors happy. Occupiers’ dreams of widespread revolution, of an overhaul of the socioeconomic system, have yet to become reality.

Police Chief Chris Burbank also feels that the Occupy movement was more of an expression of discontent than a plan of action. “I certainly think that there was some expression and that you had people who were unhappy with the situation and what was going on. I think that message was received, but unfortunately—as you look across the country—I don’t think that message was received by the political entities that make the decisions,” he says.