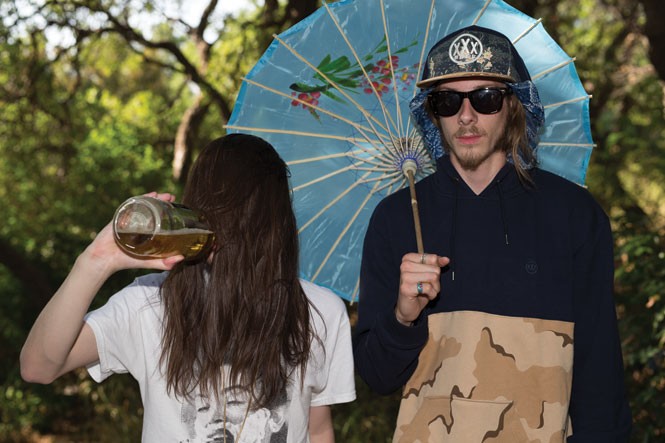 If there were a brief synopsis to accompany WE-E.T.'s Vol. II, the new concept rap album by rapper Harrison Montgomery (aka Erasole James) and producer Andrew Auman (aka Piccolo), it would probably go something like this:

With their home planet, Namek, destroyed, blown to pieces by a supernova via the evil villain Frieza, the interstellar rap duo WE must venture to Earth to find refuge and bring balance to the universe through rap music, acid tabs and tightly rolled blunts.

If you're a Dragon Ball Z fan, this should sound somewhat familiar, and if you're not, it doesn't matter.

Like Outkast's ATLiens or Del's Deltron 3030—or pretty much any concept album based on the marriage of hip-hop and a rapper's favorite movie, cartoon or television show—the overall theme is not so much a narrative gimmick as it is a vehicle for whatever tangents the artists choose to explore.

Known primarily through their work with Dine Krew (a Salt Lake City-based hip-hop collective that also includes Shatter Dome, Franky Numbs and Silent K), WE is a side project that enables Auman and Montgomery to untether themselves from anything vaguely resembling their past collaborations. "Me and Piccolo are always experimenting with different things, and with WE, it's just fun," Montgomery says. "It allows us to do and try different things."

Though plenty of anime references can be found throughout the album, WE-E.T.'s Vol. II, is a diverse collection of anecdotes. The album's story arc picks up where its predecessor (2012's WE-E.T.'s Vol. I) left off, with WE's home planet in ruins. In WE-E.T.'s Vol. II, we find Montgomery and Auman on their way to Earth, hoping to hang out with rappers, experiment with drugs and muse about whatever they see fit.

The approach works overall, but it's on the songs that have the least to do with Dragon Ball Z that we see some of WE's best arrangements. On the track "Snakes," a tiptoeing bass line skips along while a meandering trumpet howls in the distance. The sound evokes dark shapes and shadows, the things that lurk in the night. Montgomery compliments Piccolo's production while reflecting on the time a thief broke into his car, "It's unusual to diss him/ He's so brutally descriptive/ In the school full of the missing/ If you build it up angels will rise."

Montgomery is a sharp observer, a baritone-voiced poet with a percussive effect to his alliteration. He packs every bar with as many syllables as possible and suggests to the listener that not only can he carry an abstract thought, but that he's also a necessary counterpart to Auman's beats.

Auman's production on WE-E.T.'s Vol. II is accessible and masterful. His beats provide a way for emcees to easily submerge into wild streams of consciousness, and he has a prodigious ability to unearth obscure movie quotes, mellow backing vocals and gritty drum patterns.

Montgomery claims that Auman purposefully keeps his methods secret. "I tried to make a song with Pic once, and he actually kicked me out of his house," Montgomery says. "I would be like, 'Where did you get this loop from?' But he'll never say anything. He's the only one who knows."

The easiest way to get a handle on Auman's mind is on the album's 12th track, "Refuel." It's an instrumental break that serves as a theme to the duo's approach to Earth. A dreamy flute glides over a rattling drum kit, while a faint harp emerges in the background. The sound is full and colorful and crackles like an old 45. As the beat reaches its climax, it's hard not to imagine a lone ship drifting in space, like a still from 2001: A Space Odyssey or, I suppose, Dragon Ball Z.

WE-E.T.'s Vol. II features an impressive roster of local talent (Atheist, Morris Bars, Dusk Raps and Cannibal J all make nice cameos). And while it's commonplace for rap groups to load up tracklists with guest appearances, the album doesn't use this tactic as a crutch. Its brightest moments are when Montgomery and Auman work in tandem. At times, you can almost sense that this project was made for WE's own personal enjoyment. There's no pop-heavy radio hit or pandering to any particular sound or even audience. Really, WE-E.T.'s Vol. II is just two kids sitting around getting blazed and, of course, reminiscing about their favorite cartoons.