Michael Lee vs. Fred Cox is the legislative race to watch

The jagged puzzle piece known as House District 30 is the site of what might be 2014's most competitive legislative race, as former Republican lawmaker Fred Cox seeks to reclaim the seat he lost to Democrat Janice Fisher in 2012 by fewer than 400 votes.

A near majority of the voters in that section of West Valley City—between 3740 West and approximately 7100 West, running from 3500 South to 4700 South—don't affiliate with either party. Fisher decided not to run again, and now Cox is squaring off against Democrat Michael Lee, a local union leader and deputy sheriff of the Unified Police Department—and no, he's not that Mike Lee.


The owner of a small architecture business, Cox has long been involved in the legislature, advocating on behalf of his profession. He also got involved in other political campaigns, including that of former Rep. Ron Bigelow, R-West Valley City, who stepped down from the legislature in 2011 to join the governor's cabinet, and whose spot in the House Cox was appointed to fill. Cox hit the ground running—he was appointed on Jan. 10, 2011, and his first legislative committee was Jan. 11.

While some labeled Cox as a Tea Party "ally," he says he's proud of his willingness to listen to all parties and to straddle the political spectrum. After the 2012 session ended, The Salt Lake Tribune published a "red/blue" ranking of lawmakers that placed Cox smack-dab in the political middle of the House. He was more conservative than 37 colleagues, including moderate Republicans and Democrats, but less conservative than 37 Republicans.

Cox says he believes in the free market and a smaller government, but doesn't see his conservative beliefs as conflicting with progressive issues like cleaner air.

"As you start to drive into downtown, into the inversion, it's like dropping into soup," Cox says of his district's geography.

Though a bill Cox sponsored to make buildings more energy efficient failed on the Hill, it did cause Solar Day Salt Lake to name him 2012's "Greenest Republican in the State."

When it comes to federal land, Cox agrees that Utah should control the majority of the land within its borders, but that didn't stop him from fighting Rep. Ken Ivory, R-West Jordan, for months on Ivory's bill to take back federal lands, because the bill originally didn't specify what could happen to the land if Utah reclaimed it.

"We have Constitutional claims and the ability for us to get the land exists," Cox says. "[But] I'm not sure I want the decision of what to do with the land made by a committee of Realtors, so I do believe we need some additional protections."

At the heart of Cox's campaign is his belief in advocating for constituents' rights, even if it puts him up against his party. That belief led him to fight a 2011 proposal by then Attorney General Mark Shurtleff to allow police to arrest citizens for class B and C misdemeanors without a warrant, and oppose a 2013 bill to restrict smoking in cars with passengers—even though he's not a smoker.

"If we don't have someone standing up for those rights we'll continue to see the government take away those rights a piece at a time," Cox says.

Michael "not that Mike" Lee
MichaelDLee.net
Michael Lee is new to politics, but he knows what it means to dedicate one's life to public service. After 13 years in law enforcement, one of Lee's scariest days was one of his earliest as a patrol officer responding to a fire in Magna, only to discover that the man who had started the fire had also barricaded himself in the building's basement and was firing a weapon.

Lee had to approach the basement of the burning building and was greeted by the sound of gunshots. In the confusion, Lee never knew if the shots were aimed at him, but by the end of the day, Lee had gained a new appreciation for the hazards of his work. 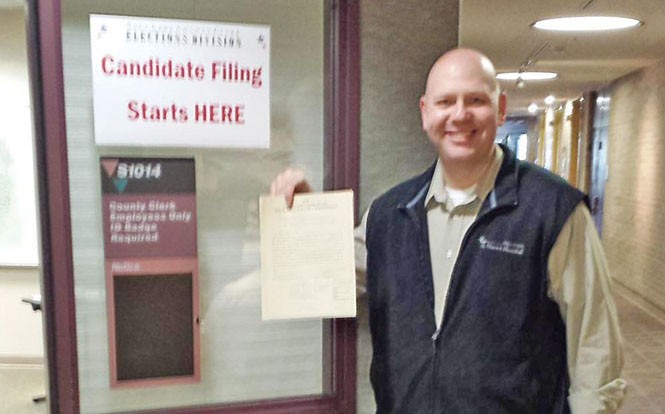 If elected, Lee says, he'll advocate for public safety and can draw on his career experience for addressing public policy. The greatest lessons he's learned from his work, he says, came from community policing—an assignment that gave him experience running low-level narcotics and vice operations and also allowed him to interface with community councils in his neighborhood and do anti-gang outreach at local schools. He helped bring the evidence-based Gang Resistance Education & Training program to the Sheriff's Office, which has police meet with at-risk kids in middle and junior high before they go to high school, when they're more likely to succumb to criminal activity.

He wants to advocate for a smart relocation of the Utah State Prison that's not too far from hospitals, courts and the homes of corrections officers who currently work there and live in the county. He also wants to make sure a new prison invests in programming to keep inmates from re-offending once they get out.

"The state owes it to society to try and rehabilitate those offenders," Lee says.

Lee's campaign is less about big ideas, he says, and more about being an advocate. He's represented his community not only through his professional career but also as a union organizer; he's currently the vice president of the Utah AFL-CIO. But he would like to fight for campaign contribution limits, since Utah is one of only four states that place no limits on campaign donations.

"You can essentially buy a politician in Utah," Lee says.

He also supports ideas like the unsuccessful 2014 bill sponsored by Sen. Pat Jones, D-Holladay, to limit family income-tax exemptions to two per child and force larger families to pay more into education funding.

Ten years ago, Lee says, he never would have guessed he'd be running for office. Now, he reflects on an uncle who represented southern Illinois in the state's assembly and fought hard to help his community, even when it meant going up against the powerful cabal of Chicago legislators.

"I want to be the guy that can bring things to the west side," Lee says. "I want to be guy that's up there advocating for these folks that work as hard as anybody else in the state."