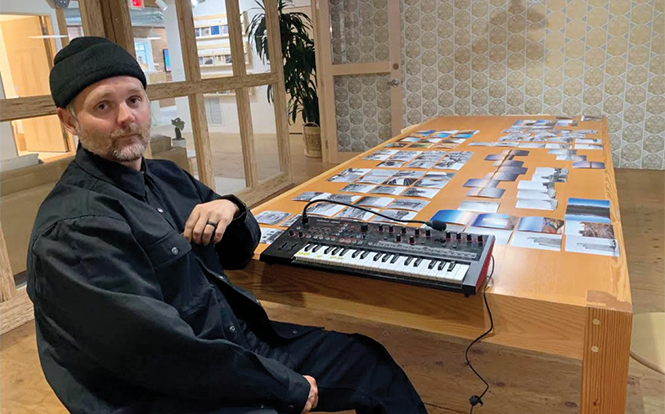 Modern West Fine Art is redefining many things at their chic, airy and new-ish gallery at 400 South and 700 West, where they relocated in 2019. Gallery owner Diane Stewart started Modern West with a vision of reimagining understandings of the West, while supporting emerging artists at the same time. With the new space comes a new residency program, which has been operating for around a year now.

One of their current residents is Adam Michael Terry, known around town as a talented DJ, founder of the label FOUNTAINavm and music creator, curator and fan. But upstairs at Modern West, he's currently fleshing out multi-media fusions of film, collage, photography, field recordings and musical compositions he calls picture scores—a project 10 years in the making.

Terry shoots his striking photographs on a medium format Yashica Mat-124 G that belonged to his grandpa. "It's very personal to me, it's part of my heritage. All of my ancestors on my dad's side are buried down in Ephraim, my mom's side were early settlers too, related to Buffalo Bill and the first people to ship Idaho potatoes out by train," he says of finding the West as the subject of his work.

"Even though I grew up in the Midwest and the East Coast, we moved back here when I was in the seventh grade," he adds. "I was just like a little skate rat, into hip hop and skating. But I loved the outdoors. After Scouts—I never finished—then I started going out on my own more. I was always a little lazy and occupied with city life, but in the last 15 years I started really getting out."

During the first, claustrophobic phase of COVID, Terry especially found himself needing to get out of the city. "I'm just exploring ... trying to put myself in the same headspace as the people who were here a long time ago. Every year once or twice I go on a little self-walkabout," he says. Such outings, most often done solo, result in works like his song "Fantasy Canyon Pt.1," which physically exists alongside its blown-up image on the wall in Terry's studio, a lathe-cut record in a clear plastic sleeve hung on a nail—together, a picture score.

"It just has this feeling of mythological anticipation," he says of the song, which rattles with woodwinds, spell-like chimes and spooky basslines. While looking at its accompanying photo—a splash-like rock formation—one can't help but feel anticipation oozing from the image as well. "Walking through the canyon ... you get up close and you can see all these cool formations," he says, gesturing to other photos from the outing. "Like, look at this guy's cool face coming out ... dragons, ghosts, a castle ... this looked like a shadow of a rabbit. Studying mythology, the rabbit is a mythological creature that takes you to the underworld."

"I've been studying Native cultures somewhat, not trying to be appropriative or anything like that, but definitely being inspired by the West we're losing," he continues. "This Fantasy Canyon series is going to be part of a greater narrative, basically spanning the whole Uinta Basin, Vernal, Duchesne. We've got so much bizarreness out there: Skinwalker Ranch, Dinosaur Monument, Fantasy Canyon, huge oil industry."

Driving out there, he says, one sees such things as massive oil rigs, wild horses, coyotes and ancient rock art panels, and one considers the human stories tangled up in the land: energy impacts, public land disputes, mythology, folklore. On the trip, he listened to a soundtrack he'd made for walking around and shooting images, but also recorded stuff too, sitting under some shade in 110-degree heat, alone. Returning from trips like these—including visits to Green River—he will also often process at home, using his field recordings to compose music, like notes on what he's felt and seen.

"[The Great Salt Lake] is totally industrialized and ... its fate, it's drying up," he says soberly, gesturing to another image of a white rock on the west side of Antelope Island, which looks like a face watching over the lake. Another tentatively-titled piece, "Seven Sons of the Salt Lake," is a consideration of his own family history in a landscape of human-made industrial ruin. "Calling it 'sons,' I'm talking about my own personal heritage, my family coming here with Brigham Young, sent down south to do logging industry for Utah. I have mixed feelings about settlers in the West. It wasn't very pretty, and it's part of our heritage that we deal with here in the West."

"I'm very much selling my experiences more than beautifully composed shots or something. I'm not out on the mountain rim for 10 hours composing the perfect shot and doing it right," he says. "It's journalistic, impressionistic at the same time. A good journalist is trying to keep the narrative, the story of what's happening."

That story is one that takes into account past and present, and spans many other parts of Utah that Terry is still piecing together into other picture scores. His residency runs through Dec. 23, and on Dec. 3 he will present the completed works at a physically immersive gallery debut. Visit modernwestfineart.com for more info.