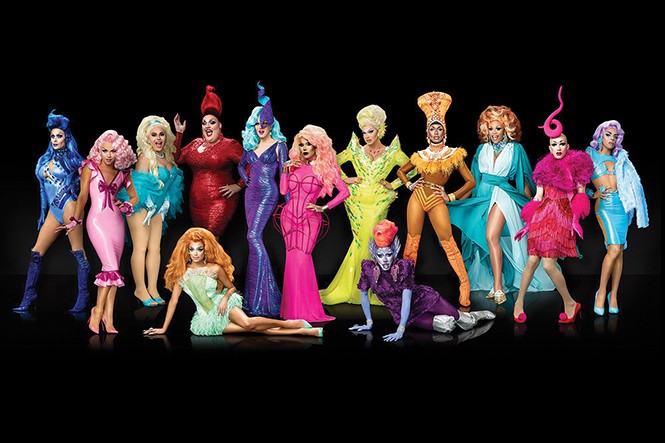 RuPaul's Drag Race
Friday, March 24 (VH1)
Season Premiere: For Season 9, RuPaul's Drag Race moves from niche network Logo to the slightly more mainstream VH1. What does this mean? That drag queens are now ready for 'Merican primetime? That our divided country needs fabulousness now more than ever? That VH1 could use some new programming unrelated to basketball, hip-hop and potluck dinners? Yes. Like a flashier, bitchier Project Runway, or a taller America's Next Top Model, RuPaul's Drag Race brings the D-R-A-M-A like nothing else on television, and deserves to be exposed—phrasing—to a wider audience (and if a few unsuspecting motorsports fans accidentally tune in, even better). On the educational side, I also now understand the phrases "Read to filth" and "She done already done had herses," and hope to use them in a Ph.D. dissertation soon.

Bones
Tuesday, March 28 (Fox)
Series Finale: By the time it premiered in 2005, Bones had an interesting twist on the forensic procedural already beaten to death (ha!) by CSI: Dr. Temperance "Bones" Brennan (Emily Deschanel) was an atheist anthropologist who lived by science, and her FBI partner Seeley Booth (David Boreanaz) was a sturdy block of all-American wood who liked Jeebus and hockey. Together, along with some slick computer graphics, they solved murders. Then Fox went on to make 246 damned episodes so TNT could play incessant weekday reruns alongside Castle (fun sick-day game: "Is This Castle or Bones?"). Now, after 12 seasons, it's finally canceled ... or was that Castle?

Harlots
Wednesday, March 29 (Hulu)
Series Debut: The producers of Harlots, a drama about 18th-century London prostitutes, promise that the series will deliver just as much male nudity as female nudity, so ... progress? Said producers are also all women, so, yes. Recent sex-worker shows, like the cheeky Secret Diary of a Call Girl and the chilly The Girlfriend Experience, were told from a female perspective, but Harlots introduces several (from Samantha Morton, Lesley Manville, Eloise Smyth and Downton Abbey's Jessica Brown Findlay), while also throwing in familial strife, professional rivalry and the everyday/night danger of 1700s England (not to mention impossibly elaborate wigs and corsets). The best whore-TV show since Sean Hannity.

Imaginary Mary
Wednesday, March 29 (ABC)
Series Debut: Since Dharma & Greg ended in 2002, Jenna Elfman hasn't been able to catch a break: She's headlined four failed network sitcoms since then, but has also guested on several high-quality dramas and comedies (and Two & a Half Men). The obvious answer is to give Elfman a supporting role in a cool cable series—she would kill it in something like Better Call Saul or Fargo, literally—but no, here she is in another throwaway midseason crapcom. In Imaginary Mary, she's a career woman in PR (because that's the only job for the ladies on TV) who's love life is mess (of course), and she has an imaginary, animated friend (voiced by Rachel Dratch). Time for a Dharma & Greg reboot, Netflix.

NCAA Basketball
Through April 1 (CBS, TBS, TNT, TruTV)
March Madness: I filled out my brackets—when do I collect my sportsball winnings? After years of ignoring the inevitable office-wide emails about "March Madness!" I picked teams based upon color theme (UNC Wilmington has a particularly pleasing palette) and wacky-name factor (Villanova is close enough to "villain" + "nova," while Golden Gophers and Gonzaga are self-explanatory). When someone reminded me that this is college sportsball, I then factored in each school's academic rankings and ... j/k! This ain't about grades—it's about getting paid. Speaking of which, when again do I cash in? These columns barely cover beer runs.