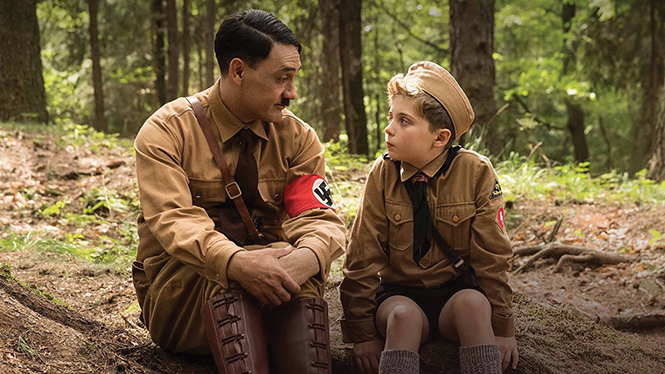 When you think about it, approaching the learning and un-learning of hate as a kind of fairy tale—the way Taika Waititi does in Jojo Rabbit—isn't a crazy notion, and might actually be inspired. Because what is bigotry but a form of myth-making, fashioning stereotypes into archetypes for the purpose of attempting to simplify the complexities of life? Of course, it's a risky business in 2019 telling a story about Nazis that treats them as ridiculous—in the real world, they're still far too present and dangerous to be dismissed—but that doesn't mean there's no way to make it work. Maybe you can craft a "once upon a time" narrative into something that eviscerates the childish ignorance behind racism and anti-Semitism, and makes swastika-clad goons into subjects of much-deserved scorn.

Maybe. But there's a concept, and then there's the execution. And Jojo Rabbit cruises along on its tone of blithe silliness for far too long to earn any points for dropping theoretical truth-bombs like "what if you thought you hated someone because of their identity, but then you became friends?"

Set in Berlin during the waning weeks of World War II, it follows 10-year-old Johannes "Jojo" Betzler (Roman Griffin Davis), a would-be Hitler Youth so fired up about the Reich that he sees Adolf himself (played by Waititi) as an imaginary friend. At his initial training camp, however, he's first mocked for his unwillingness to kill a rabbit—leading to being given the mocking nickname—then wounded and scarred during a drill with grenades. Then, while recovering back at home, he discovers that his mother (Scarlett Johansson) is hiding a 17-year-old Jewish girl named Elsa (Thomasin McKenzie) in a secret room. Will being up-close-and-personal with an actual Jew change Jojo's mind-set?

Before we get to the answer (hint and spoiler alert: yes), there's plenty of material showcasing the oddball sense of humor Waititi has shown off in features like What We Do in the Shadows and The Hunt for the Wilderpeople, and not just in his own bizarre portrayal of Jojo's faux Führer. Sam Rockwell is on hand as the reluctant commanding officer of the Hitler Youth camp, trying to make the most of his posting when he already sees Germany losing the war as a foregone conclusion. Weird visual jokes appear at random intervals, including a hat-tip to The Boys from Brazil, alternating with clunky routines like a roomful of people spending an inordinate amount of time exchanging "Heil Hitlers" and a misunderstanding about German shepherds.

When it comes to the central relationship between Jojo and Elsa, however, Waititi is pretty earnest. As a director, he has a nice touch with young actors, and he develops a solid chemistry between the talented McKenzie (from Leave No Trace) and first-time screen actor Davis. It's here that Waititi leans into that fairy-tale allegory, as Jojo attempts to put together a book about Jews based on a combination of his own learned prejudices and deliberate falsehoods manufactured by Elsa just to mock him (e.g., Jews sleep hanging upside-down from ceilings, like bats). Again, in theory, it's a worthy notion, underlining the preposterousness of the things people believe about The Other in the name of dehumanizing them, even as an actual adult Gestapo agent (Stephen Merchant) chuckles at the young boy's absurd ideas while observing "it's funny because it's true."

Ultimately, though, this is a cocktail of goofy and deadly serious, and Jojo Rabbit just can't get the balance of ingredients right. Since Jojo himself is such a gentle soul from the outset, there's little sense of a genuine darkness that needs to be eradicated through his friendship with Elsa. And Elsa herself, while she gets a bit of an edge that prevents her from simply being the Jewish equivalent of the "magical Negro" trope, hasn't got much of a purpose beyond helping Jojo grow. Waititi softens homicidal xenophobia into something easier to swallow, in a way that doesn't allow the scenario's true horrors to come home to roost. There's a spark of brilliance behind beginning from the premise that bigotry is rooted in immaturity, but by erasing the grim from this fairy tale, Waititi leaves us with a movie that still has a lot of growing up to do.