The Hollering Pines expand their sound to include new influences. 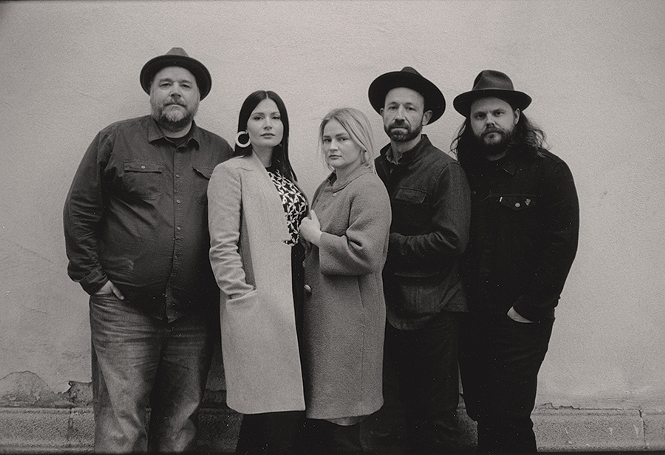 The music of The Hollering Pines is at once nostalgic and restless—firmly rooted in the traditions of decades past, but always with an eye and an ear toward the contemporary. The Salt Lake City-based group initially formed in 2012 as a side project around two sisters—vocalist-guitarist Marie Bradshaw and vocalist-bassist Kiki Jane Sieger—who were performing together in an acoustic group called The Folka Dots. Originally, it was meant to be an outlet for Bradshaw's dissatisfaction with the Folka Dots' musical direction. "I think I mostly just wanted to do something with drums in it," Bradshaw says of the group's formation. "I was really wanting to rock out a bit, and I was getting kind of tired of just playing acoustic music."

That desire to combine acoustic folk and country with a heavier rock edge is apparent when listening to the band's 2013 debut Long Nights, Short Lives and Spilled Chances. The album's foundation was still unabashedly country, with Bradshaw and Sieger's interweaving vocals carrying a smoky twang, and pedal steel, fiddle and mandolin coloring the instrumental background in warm, rural shades. But Dylan Schorer's work on lead guitar, as well as Daniel Young's drumming, injected a fair bit of bluesy intensity into songs like "Carla Cain," "Wished I Was Gone" and "Not The Only Ones," and propelled the album well past its perhaps modest ambitions.

For a first album, Long Nights presented an incredibly fully-formed sound—certainly reliant on established styles, but effective nonetheless. The Hollering Pines' 2017 sophomore album Mansion of Heartbreak brought a moodier, grittier energy to the table and saw the addition of mandolinist-guitarist Mark Horton Smith to the band's official lineup. Still recognizably country, it unveiled a broader instrumental palette—treading the seam between country and the broader world of Americana.

Bradshaw and the rest of The Hollering Pines seemed to be eager to evolve their sound even further for their third release, Moments in Between, out Friday, June 7. "I think with this one, we really stretched out a lot in terms of the songwriting and the sonics of the album," Bradshaw says. Alongside more traditional country acts such as John Hiatt, Bradshaw describes their newest batch of songs as being inspired by "people who you can tell have listened to country music, but who also like to rock 'n' roll a bit," citing Americana-adjacent artists like Bruce Springsteen and Tom Petty as large influences on their new direction.

Those influences are clearly heard in advance singles "He Don't Understand" and "She Don't Want to be Found," which craft sweeping, austere soundscapes that The Boss or The Heartbreakers would be proud to call their own. Indeed, Moments in Between wasn't just inspired by people who dabble in non-country music; it was made by them, too. "All of us in the band are like, the ultimate music nerds. [We] love everything" Bradshaw says, though she admits that sometimes she gets stuck on sounds. "I get into a certain genre or a certain artist and I have trouble seeing what's good about other things, and I can be kind of a snob about it. But everyone else will pretty much listen to whatever's good."

While Moments in Between continues the trend of the band expanding their range of influences and styles, it also looks to be a more stripped-down, no-frills affair than Mansion of Heartbreak, featuring a scant two guest musicians compared to its predecessor's five. "The sound we were going for was coming together really well with the people that we had," Bradshaw remarks. "Mark and Dylan were playing so well off of each other, I just felt that it didn't really need a ton else. We were also able to get Greg Leisz and Gary Moore to do some cool pedal steel stuff, which really filled everything out."

The Hollering Pines have managed a polished, professional sound on all their albums (thanks in part to producer Scott Wiley), but to this point, they've remained strictly independent. When asked about the possibility of signing with a label in the future, Bradshaw expresses ambivalence, stating "I think ... record labels are getting less and less crucial, so to me it feels less make-or-break. It used to seem like you've gotta do that, and then everything else will fall into place ... now, it's easier to get in touch with people who are at the top of their field, like [sound] engineers and artists. You can really do a lot yourself."

While Bradshaw and her bandmates have certainly managed quite well on their own, that doesn't mean they don't have their own obstacles to overcome. The band's mature sound comes from a real place—all five members are adults with full-time jobs outside the music scene, and several of them, including Bradshaw, have spouses and children. "It can be hard to find time in your life to just be creative," Bradshaw admits, "and it can be hard to switch gears from being a professional person or a parent or whatever, and practice, clip your strings, think about what you're going to write down. But y'know, we all make it work."

The Hollering Pines celebrate the release of Moments in Between with a concert at Commonwealth Studios. The band debuts material off the new record for the first time live, as well as older songs like "Old Time Feeling," which Bradshaw cites as a personal favorite. "It's always fun to perform that one live, and Mark and Dylan always kill their solos," she enthuses, "and it gets everyone dancing, so we usually try to play it after everyone's had a drink or two." Although they continue to explore their potential—taking from country, Americana, folk and simple rock 'n' roll—the fact their music can be enjoyed with a drink in hand is surely one mark among many that they're the real deal, a true-blue country rock band.