A bicyclist accused of DUI won't take the rap sitting down. 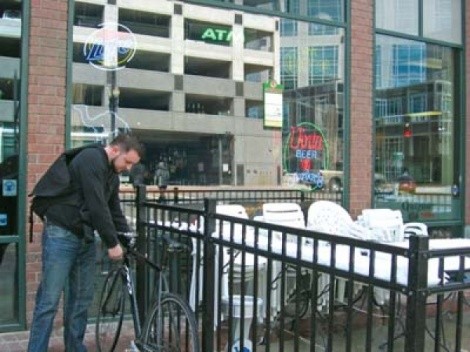 On advice of his attorney, Keith Solmo took up riding his bike to and from the Gateway Saloon in Vernal. The archaeologist working in nearby oilfields had been tagged with one DUI in Utah and didn’t want another. It turned out to be a bad plan.

In late June 2008, Solmo left the saloon after an evening celebrating the news he’d just landed a new job in Nevada. He and a fellow archaeologist biked away from the bar’s parking lot, then pulled onto the main drag through town to avoid construction that had closed the sidewalk. They had gone only about 300 feet when the lights flashed behind them.

A Vernal Police squad car pulled over the couple, just as if they were driving a car. (No light on the bike, according to the police report.) More police cars soon arrived. Solmo and his companion were put through walk-the-line sobriety tests, handcuffed and spent the night in jail—both charged with driving under the influence.

Solmo is now living in Nevada and has no interest in living in Utah again. But he’ll be back to fight the DUI-on-a-bike case in court. The case is scheduled for court argument next month on the question of whether DUI on a bicycle is even possible in Utah. It's a pertinent question as bike pub crawls, already popular in San Francisco and Portland, are increasingly seen in two-bar-per-block Salt Lake City.

“I feel like they need to fit the punishment to the crime,” Solmo says, noting the thousands of dollars he's spent in attorney fees. “There is no way I could possibly see to harm someone else riding a bicycle while intoxicated.”

Utah prosecutors debate that safety argument, but prosecutors and defense attorneys agree Utah law is wobbly on the issue of DUI on a bicycle.

Among Salt Lake City cycling groups, it is dogma that the charge is impossible. They point to a provision in Utah state code that exempts bicycles and other vehicles “propelled by human power” from “penalties related to operator licenses under alcohol and drug related offenses.”

But Dave Rosenbloom, Solmo’s Park City attorney, notes that while the law appears to say cyclists can’t have their driver licenses yanked for riding drunk, it doesn’t say anything about other potential consequences of DUI in Utah, like jail.

Rob Latham with the Utah Association of Criminal Defense Lawyers who once had a client prosecuted for drunken power-mower driving, says DUI on a bicycle is a real possibility under Utah’s open-ended drunken-driving laws. Salt Lake City Prosecutor Sim Gill, on the other hand, thinks the charge is a bit of a stretch.

The confusion boils down to what constitutes “a vehicle” for purposes of Utah DUI law. Utah’s “motor vehicle” statute—which contains the DUI law—defines “vehicle” twice. The first definition describes things with motors, from motor vehicles to off-highway vehicles. But “vehicle” is defined again in the DUI section as just about anything “in, on, or by which a person or property is or may be transported or drawn.”

Paul Boyden, head of Utah’s Statewide Association of Prosecutors, says prosecuting someone for DUI on a bicycle “sounds ludicrous until you think of the number of people who could be killed” by cars swerving to avoid collisions with drunken cyclists. But Boyden also notes confusion in Utah law. “I’m sure this will be litigated,” he says.

Salt Lake City Prosecutor Gill says he could imagine a case that might merit the charge—a bicycle pedicab in traffic, for example. But for the most part, he says, if intoxicated cyclists are breaking a law, “I think that’s called public intoxication.”

The Salt Lake Police Department likewise says “public intoxication,” carrying a small fine, is the likely ticket for cyclists in the city, as opposed to a DUI charge that carries jail time and fines running into thousands of dollars.

Solmo says he’s committed to being the guy who forces Utah courts to dump the idea of biking while intoxicated. His companion on the Vernal bike ride pleaded out her case. But Solmo, who already has a DUI on his rap sheet, rejected plea offers. In Utah, any plea would make Solmo a multiple DUI offender, dramatically escalating his punishment. “I feel like I put in a lot of effort to not drink and drive,” he says. “I’m willing to take it as far as it needs to go.” Vernal’s prosecuting attorney did not respond to City Weekly’s request for an interview.

In Vernal Justice Court next month, Rosenbloom, Solmo’s lawyer, and the city prosecutor are scheduled to argue the question of whether a bicycle is a “vehicle” for purposes of DUI law.

The Utah law that extends traffic laws to cover bicyclists is nearly identical to the section on horse riders. But you can’t get a DUI on a horse in Utah. That is thanks to a Utah man who had his DUI-on-horse conviction overturned in 1986 by the Utah Supreme Court, which stated Utah’s law was then so badly written, “it is impossible for anyone to determine, even upon thoughtful reflection, which portions of the vehicle code the Legislature thought should apply to animals.”

Rosenbloom says when DUI law is pushed to its outer limits, it can backfire. “In a way, they are encouraging driving by discouraging other behaviors that are safer,” he says. “When you send a mixed message, when people are trying to comply with the law but can’t, you are wasting resources.”

Salt Lake City bicycle advocate Dan Fazzini doesn’t think DUI is legally possible on a bicycle, but he wouldn’t encourage it. “Whether or not you can legally ride [drunk] doesn’t mean it is safe to be doing that,” he says.

Jonathan Morrison, executive director of the Salt Lake City Bicycle Collective, echoes that view, but says there is an argument for biking to the bar.

“I definitely have lot of friends who were riding drunk and were ‘attacked’ by a parked car. At the same time, they are not going to kill anyone else,” he says. And bicycling to the bar removes the temptation to drive home out of fear of leaving the car behind overnight. “If people are going to have a good time and bar hop, they can do it in a group and not break the law. It supports local business in a way, and is kind of fun.”

Those words should come with a caveat. At least until Solmo’s case is finished, a horse is the only sure DUI-safe mode of transport in Utah.