Where did two-letter postal abbreviations come from? 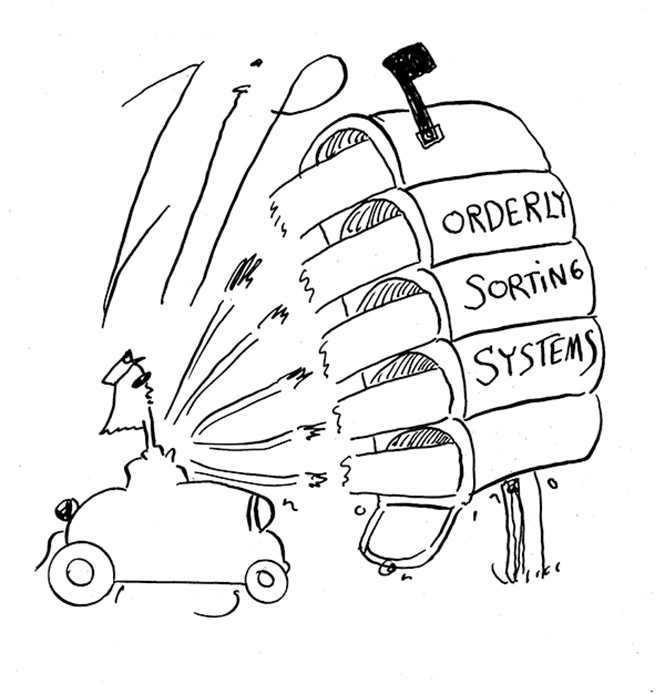 Why oh why did the USPS decree a two-letter abbreviation for states? With three letters you can not only have an unambiguous designation, but one that can be recognized as the state designated without memorizing an arbitrary two-letter code. Surely it isn't saving ink. What nefarious plot brought this plague upon us? —Richard Trombley

If you feel overwhelmed by two-letter state abbreviations, wait'll you hear about 13-letter city abbreviations. I pray you never have to use it, Richard, but yes, the United States Postal Service publishes a list of approved city-name truncations, for those emergencies when you need to send something to Rancho Santa Margarita, California, but your address template permits only so many spaces.

And that's the limiting factor here: it's not ink the USPS is worried about but mailing-label real estate. If need be, they figure, everything on the bottom line of an address should fit into 28 character positions: according to Publication 28, their addressing-standards bible, that's 13 characters for the city, a space afterward, two characters for the state, two spaces ("preferred") between state and ZIP, and ten characters (including hyphen) for the ZIP+4.

This wasn't always a concern, of course. In the abbreviation-happy 1800s, when every James or Robert was a Jas. or Robt., the Post Office Department (as it was then known) just needed some way of guessing where these people wanted their mail to go. Until the mid-20th century, the P.O. preferred that senders write out state names in full, but was willing to meet the abbreviating public halfway by providing an occasionally updated list of suggested short forms. These were all over the place lengthwise, from two or three letters on up: Massachusetts was "Ms." on the 1831 list, but had settled out at "Mass." by 1874; Michigan evolved from "Mic. T." (for "Michigan Territory") to "Mich." and stayed thus for 90 years.

Meanwhile, mail delivery tended to be circuitous and inefficient, because we lacked an orderly sorting method. A letter might be handled by as many as ten carriers on its voyage from sender to recipient; one addressed to Charleston, South Carolina, could well make an errant stop in Charleston, West Virginia. And the mail system became taxed by ever-greater usage, booming along with everything else post-WWII: between 1940 and 1965, Americans' use of the mail grew by nearly 160 percent.

What nefarious plot was cooked up to solve this problem? The Zone Improvement Plan, introduced in 1963, in which geographical areas were assigned a numeric code for easier sorting and delivery. Along with this came the now-familiar all-caps, no-periods state abbreviations, which were actually rolled out twice that year. The first batch, in June, contained lots of three- and even four-letter entries: IDA, OKLA, MONT, etc. But by October the postal service, looking to preserve more character space for the new codes, published a revised list using a consistent two letters per state. It's been emended only once since: Under the second 1963 scheme Nebraska was given NB, which inspired objections—polite ones, we'll assume—from Canadian postal authorities fearing potential confusion with New Brunswick. In 1969 Nebraska became NE.

ZIP codes evolved more significantly: ZIP+4 was added in 1983 to identify a particular side of the street, or an office building; starting in '93, 11-digit ZIPs allowed for mail to be sorted in order of the carrier's route. As demanding as some might find those two-letter abbreviations, AL, AK, and the rest are really the least significant facet of the Zone Improvement Plan, which transformed the way mail was delivered in the United States.

For a deeper dive on this subject, I'll refer you to a 2013 report by the USPS's Office of the Inspector General, The Untold Story of the ZIP Code. If that's even a slightly punchier title than you'd expect from an IG report, blame it on enthusiasm: these guys, it quickly becomes apparent, are really proud of their little mail-sorting system and its "positive spillover effects" on the nation as a whole. ZIP codes are nonproprietary, we're reminded, and so have been available for societally beneficial use by demographers, public-health officials, emergency workers, and insurance providers alike. (Plus schlock-TV producers—Beverly Hills, 90210 rates a mention in the report's third sentence.) As calculated by the authors, the ZIP scheme adds about $10 billion annually to the economy, and yet it exists only "out of pure good will." Seriously, you will never love anything as much as the USPS Inspector General's office loves ZIP codes.

The report also suggests avenues for future growth—notably linking ZIPs with geocoding (latitude and longitude coordinates), to make delivery routes yet more efficient and facilitate better communication with people in high-risk areas like flood or wildfire zones. "This is the opportunity to innovate anew on an old innovation frontier," the IG's office says: "This is our 1963." Which seems to me like kind of a weird call to arms. I mean, innovation's great and all, but the invention of the ZIP isn't exactly the first thing that year's remembered for.