Utah's very own Southern rock band is back for Another Night.

w/ The Weekenders, Crook & The Bluff 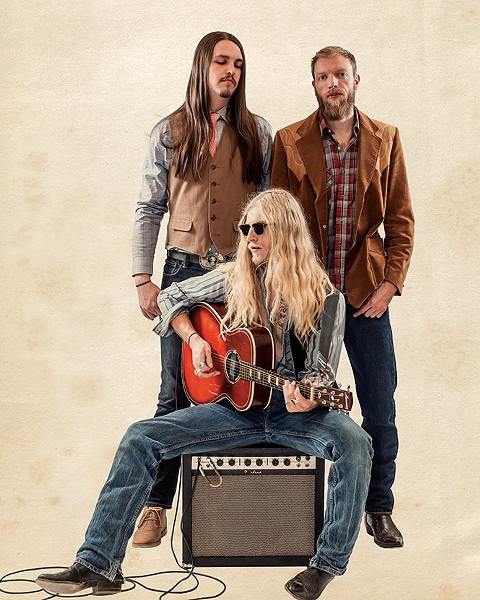 Candy's River House may be the only local Utah band that can also call itself an authentic Southern rock band and get away with it.

The long-running project of Roosevelt-born singer/guitarist Jordan Young actually started in the backwoods of Tennessee, where Young, on a pilgrimage of sorts, learned his craft in the cradle of the blues. Young—a 29-year-old country-bred wanderer with the long blond mane of young Gregg Allman—crafted his style as a guitarist and songwriter was during a four-year stint in Tennessee during his early 20s. He lived and played in a tiny trailer park community called Gassaway, about 30 miles outside of Murfreesboro. It was there, Young says, that he learned to play in a way that could finally match the music he'd heard in his head.

"I knew that if I didn't learn to play blues guitar, then I wouldn't have a very good foundation to start from," Young said. "Everything out there feels older, and smells older. You can just tell you're in the presence of something that, for me growing up in rural Utah, was vastly different."

Broke and hungry, Young kept an eye on the work of blues greats like John Lee Hooker and Little Walter, and he played while living out of a van. Occasionally, Young would work up the courage to go into Nashville and play a couple of shows alongside professional pickers who would "just destroy you," Young said. Humbled, Young crawled back into his van and keep playing.

Candy's River House was born in the midst of that hunger to survive. Young decided that he could hold his own better on the road, and enlisted a bassist and drummer to follow him on a grueling tour schedule across the country that Young booked himself. By the end, he was the only member of the band left.

Young moved back to Utah, and he brought the idea of Candy's River House with him. The band, which now includes Joey Davis on drums and Nathan Simpson on bass, has carved out a unique place for itself in Salt Lake City's local scene.

But ever since Young returned to Utah, he's kept a piece of the South with him. "Whenever I write a song or write lyrics, I like to sort of build an environment," Young says. "I'll just make sure I don't have anything to do for the next three days and just be in one room—and that room might was well be in the backwoods of Tennessee."

Although the band has changed through the years, Young's original vision of what Candy's River House should be has stayed the same. He always wanted the band to be a trio that plays raw, southern-flavored music with a slight hard-rock edge. The band's upcoming album, Another Night, sticks to that original vision, although Young has found new ways of bringing it to life. His favorite new addition for the new record is a three-string cigar-box Dobro guitar, an endearingly simple roots music relic.

Young says he learned his work ethic from pouring concrete and working in in his family's log-house construction business as a kid. "I immediately adopted that into anything I did," he says. "I don't think I would have ever picked up the guitar and assumed I could learn how to play it without working my ass off."

Of course, that's also what drove him to be a musician in the first place: "I'll play as many shows in as many cities as I have to, to not lay concrete in January."