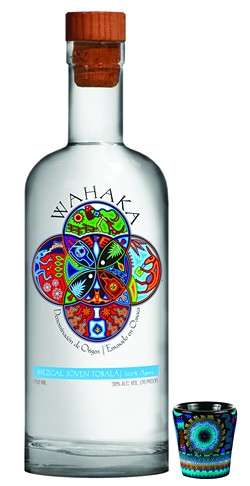 Recently, a friend of mine asked if I'd ever tried a "smoky" wine. He recounted ordering a bottle of zinfandel in a restaurant and said he was "tormented as to whether or not I was drinking smoke or wine." The wine in question was California's Predator Zinfandel Old Vine ($15.98), produced in Lodi. The answer is yes, I have tried smoky wines, along with smoky spirits. One of the former I've tasted (and enjoyed) is the aforementioned Predator Zinfandel.

As with most things in life, smoke and oak in wines and other beverages ought to be used judiciously and in moderation. There's nothing wrong with smoky flavors and aromas—often called "cigar box" or "tobacco"—but if it tastes like someone dumped a tablespoon of Liquid Smoke into your glass, that's clearly a wine that is heavy-handed and unbalanced.

On the other hand, there are libations that are intended to be subtly smoky, "subtle" being the operative term. For example, pinotage from South Africa is a somewhat acquired taste for many. It often has smoky, gamey flavors that lots of folks describe as bacon-like. Not surprisingly, these and other smoky wines tend to pair well with grilled, barbecued and smoked meats and fish.

Smoke is also a characteristic of many sought-after syrah-based wines from the Northern Rhône Valley in France. It's a typical component of red wines like Crozes, Côte-Rôtie, Cornas, Hermitage, Crozes-Hermitage and the like. The same is true of some Australian shiraz. One of my favorite smoky Aussie treats is d'Arenberg McLaren Vale Footbolt Shiraz ($14.95). Other smoky and cigar box wines I've enjoyed include Italian Nebbiolos and Barolos, some Spanish reds from Rioja and Argentine malbec. However, if you're finding smoke in varietals like cabernet sauvignon or pinot noir, it's probably due to spoilage from Brettanomyces ("Brett") yeast.

Certain grapes, like pinotage and syrah/shiraz, tend to become smoky naturally with age. But toasted and oaky wine barrels used for aging also contribute to accompanying flavors in wine. Sources of smoke include toasted wine barrels, but also sometimes the soil itself. Oak-aged red wines often have what wine writers refer to as a "smoky-sweet finish." It should be a good thing: subtle and not overpowering.

Certain spirits can taste and smell smoky, as well. Peat that is dried and smoked imparts the smoke flavors that connoisseurs love in their Scotch whiskies. Think Laphroaig 10 Year Islay Single Malt Scotch Whisky ($49.99), which offers sweet peat smoke in unison with the briny sea air of Islay.

Mexican mezcal, too, is typically quite smoky. It's made by cooking the piñas (hearts) of agave plants for about three days in pits heated with hot rocks. It's that underground roasting that lends the smoky flavors. Cheap mezcal often tastes overwhelmingly smoky and out of balance. However, a first-rate brands such as Wahaka Mezcal Joven Espadin ($31.99) offer fruity flavors followed by smoke and black pepper. It's a delicious mezcal worthy of sipping all alone, just like a fine Scotch whisky.

Woody flavors in white wine can most often be traced to oak. If you'll permit me a bit of chemistry: phenols in oak barrels interact with wine to produce vanilla flavors, along with cream, spice, caramel and smoke. There's also a new trend where some renegade winemakers are employing used American whiskey barrels—which are charred on the inside to take the harshness out of raw whiskey—to age wine. By contrast, wine barrels are usually toasted to add the flavors mentioned previously (vanilla, cream, etc.). I think it goes without saying that wine aged in charred whiskey barrels are likely to be smoke bombs.