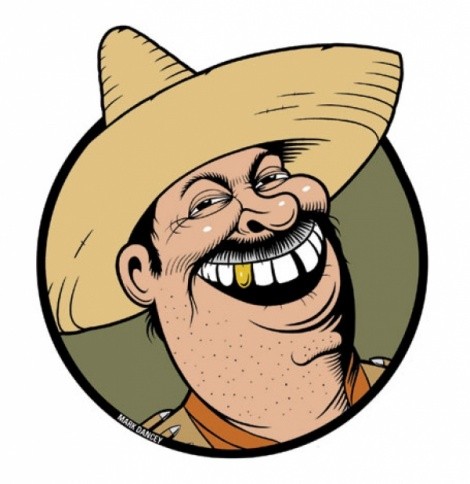 Dear Mexican: This guero downloaded Arizona Senate Bill 1070, did a search on the document for “Mexicans,” and did not come up with a single hit. What’s up with that? So, since you are such an acknowledged expert at pointing out Mexican-hating here in the American Southwest (your words, not mine), I thought that I would let you school me and show me where in the racial-profiling-loving SB1070 (again, your words, not mine) was the word “Mexicans” located. —Presumably a Member of A Bola de Pendejos

Dear Gabacho: Same place in the U.S. Constitution that allowed gabachos to discriminate against negritos after the ratification of the 14th Amendment.

Dear Mexican: What’s the deal with Mexicans and piñatas? I’m convinced that the reason that Mexicans are always so poor and uneducated stems from your childhood experience with those stupid things. At every piñata party I have been to, I have seen lots of children’s skulls bashed after the blindfolded kid with the baseball bat keeps on swinging as a frenzy of little ones sprawl and wrestle for the dropped candy. This early brain damage is the cause for Mexicans’ low school test scores and high dropout rates. —Ban the Pinata!


Dear Gabacho: Actually, it’s the high lead level in Mexican candy that causes brain damage in our niños, but that’s another story. Why the anger? Did someone not nab that last Carlos V bar from the Dora the Explorer piñata last weekend? I can lay down the ley on the sociological significance of the piñata, discuss the amazing syncretism between Aztec and Catholic jar-smashing ceremonies that combined to form the modern-day piñata experience, examine the transformation of the game from a simple pot festooned with ribbons and flowers into another step in the eternally hilarious polka between the spread of globalism (American cartoon characters now make up the vast mayoría of piñatas) and Mexican piratería (few media conglomerates license piñatas in the likeness of one of their characters, and even those that do, like Disney, find it nearly impossible to stop Mexis from ripping off their designs)—but why bother with the academic mumbo jumbo when the answer is so apparent? Think of the lesson taught with the piñata, Ban: one Mexican after another after another after another smacks the object, all in an effort to crack it so that it spills forth goodies stuffed inside. Is this not the greatest metaphor for the United States ever?

GOOD MEXICAN OF THE WEEK!
Not a cause, but a person: Sylvia Mendez, whom the Obama administration recently announced as a Presidential Medal of Honor recipient. It was Mendez’s parents who, along with the Ramirez, Palomino, Estrada and Guzmán families, successfully sued four Orange County school districts in 1946 to end school segregation against Mexican kiddies. That federal case, Mendez et al v. Westminster et al, served as an influential precedent to the much-more-famous Brown v. Board of Education. Though getting along in age, Mendez still travels the country to speak about the case, ensuring that the decision never fades away. If she ever passes through your town—and Mendez eventually will—check her out.