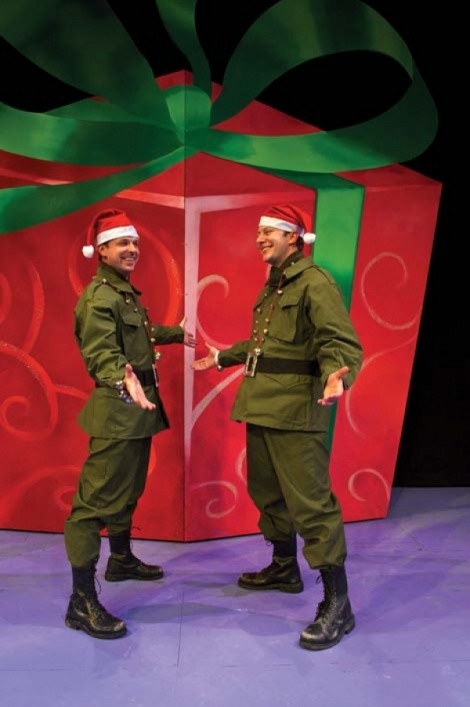 The enduring charm of the 1954 movie White Christmas lies in the performances of its headliners: Bing Crosby and Danny Kaye play their usual lovable selves, while Rosemary Clooney and Vera-Ellen couldn’t make a bad picture on a bet. All that star power—coupled with an Irving Berlin score—was enough to guarantee a hit. The screenplay was no great shakes; it didn’t have to be. It’s your basic “let’s put on a show” show, mixed with some will-they-won’t-they romantic tension and a dose of post-war nostalgia.

The lack of character development in the original is faithfully carried over into the stage version. The book is weak, and genuine laughs are few and far between. It’s not the cast’s fault but, in Act 1, it does make for a long slog between production numbers. Of these, there are many standouts. The hat-and-cane first-act finale “Blue Skies” is properly thrilling, as is the fabulously black-and-white ensemble piece “I Love a Piano.” The Act 2 finale—“White Christmas/I’ve Got My Love to Keep Me Warm”—is cheery and seasonably appropriate.

As Martha Watson, Mary Fanning Driggs is superb. “Falling Out of Love Can Be Fun” with Betty (Amy Justman) and Judy (Kaitlyn Davidson) in close harmony proves Driggs’ considerable chops as a belter and a power mixer. For their parts, Justman and Davidson are enchanting in their playful signature duet “Sisters.”

The state of the economy brings a rather sad holiday mood to 2010, so perhaps it’s appropriate for PTC to mount a Christmas extravaganza devoid of much humor. But the fact that this was intended as a comedy makes it sort of depressing. Given the strength of the musical numbers, it would work much better—and brighten our spirits—as a revue.