Conservatives riled up over race-conscious education take their fight to the state school board. 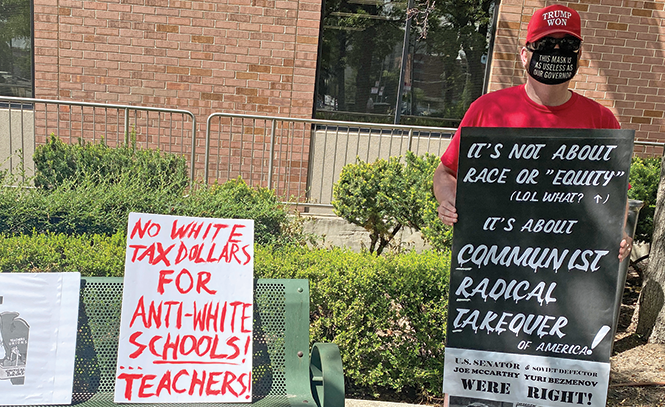 That policy—already adopted and currently in its requisite 30-day public comment period before taking effect next month—is the school board's answer to the critical race theory hysteria sweeping the political right. It notably does not ban CRT—if such a ban were even possible—but it mandates teacher training on equity and diversity while prohibiting teachers from suggesting that any race, religion, sex or creed is inherently superior or inferior to another, or that members of any particular demographic group (read: white people) should feel guilt or responsibility for the actions of their ancestors.

And while some who spoke during the two-hour hearing attempted to address the specifics of the policy, all of those present recognized the gathering for what it truly was: a symbolic pitched battle between American exceptionalism and a "warts and all" approach to history and civics education.

"It is by the design of a very well-funded and coordinated campaign to cause beautiful words like 'equity' to be questioned, to be hijacked," said Heidi Matthews, president of the Utah Education Association. "We must find age-appropriate ways to tell hard truths about our state and country's past and present."

To clarify terms, critical race theory is an academic framework for evaluating the role that systemic, institutional racism played in the founding of the United States and its development into modern society. It calls attention to practices like redlining, vote suppression and outright violence that were intentionally deployed or, at minimum, condoned by the nation's white majority to prevent Black and other minority Americans from accumulating generational wealth or securing fair, democratic representation.

If that sounds a little high-level for your fifth grader, it is. True CRT education is largely confined to the university and graduate level, but educators of all stripes have found cause to reevaluate the white-male-centric status quo in response to popular movements like #MeToo and Black Lives Matter.

And it's that reconciliation with history where critics of CRT see a widespread invasion of the public education system, with the perceived goal of planting woke, progressive ideals in the minds of children or elevating opportunities for students of color at the expense of their white classmates.

"Children should not be used as a means to another's political ends," said Jessica Fiveash of the Academic Integrity Movement (AIM), one of six groups that formally requested a hearing before the state school board.

Fiveash asked for the creation of a new advisory committee—dozens of advisory committees on virtually every academic topic already exist—composed of non-educators in order to balance the "prevailing mindset" of the public school system. And Monica Wilbur, also of AIM, listed off a series of anecdotes purportedly showing the evils of CRT in schools, like a child feeling uncomfortable after participating in a "privilege walk"—a relatively common exercise meant to challenge one's assumptions about themselves and others—or another student being told by a teacher to dig deeper on a research project rather than rely on the viewpoints of "two old, white men."

"No freedom, academic or otherwise, can exist in such a wolf-in-sheep's-clothing framework," Wilbur said.

The criticisms raised by CRT opponents are not entirely without merit. Parents have every right and sincere motivations for questioning the content of their child's classroom discussions and materials. And with thousands of educators operating semi-autonomously under a convoluted web of state and local district guidelines, there is an unavoidably blurry line between the presentation of historic facts and the moralistic judgment of historical figures.

But there is also an inescapable tone-deafness to the CRT opposition, with mostly white agitators seeing boogeymen in every corner while failing to appreciate the lived realities of people of color. At last week's school board meeting, two women with the AIM group greeted each other in front of this reporter by joking that their tardiness was due to being on "Mexican Time."

Educators say the school board's rule is overly vague, opening the door to parent complaints any time a sensitive topic is broached in the classroom. And Jennifer Graviet, a former member of the Utah Board of Education, said she's heard from teachers who no longer dare to highlight Black History Month or Pride Month for fear of being sanctioned.

"Teachers will play it safe," she said, "and unintentionally do what this rule says not to do."

Rich Kendall—a veteran Utah educator with experience in nearly every academic role from high school teacher to university president—described the school board's policy as an "awfully good start." He said that if he was still a district superintendent, he would be able to take the policy and make it work for his students, in collaboration with parents and teachers.

"I don't fear our history," he said. "I want to know everything about us from as many points of view as I can find. What I do fear is ignorance—distortion."