Why isn't venison a major industry in the U.S.? | The Straight Dope | Salt Lake City Weekly

Why isn't venison a major industry in the U.S.? 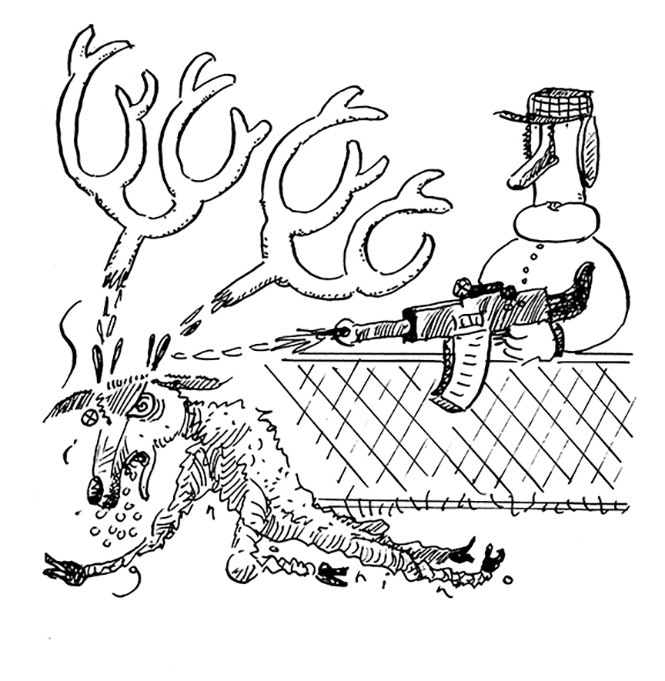 Would it be possible to supply enough venison to make a regular fast-food item, like if Arby's wanted to have their venison sandwich available all year? Is it even legal for ordinary people to raise deer? —Mdcastle, via the Straight Dope message board

For those of you who don't keep up on your fast-food marketing gimmicks, Mdcastle is referring to an autumn promotion at Arby's in recent years, a special one-day-only venison-steak sandwich. So far the scheme seems to be working better than you might guess: The venison sells out within hours, sometimes minutes, and Arby's gets, if not the widespread civil unrest inspired by McDonald's Szechuan sauce, at least the spike in social-media chatter any modern business craves. Who knew there was such a hunger for deer?

Makes sense when you think about it, really. Millennials, we never stop hearing, are driving American food culture toward more and more outré tastes, and we were bound to get around to game eventually. In October, the food-delivery app Caviar reported that orders for game meat had risen 80 percent over the past two years. Deer's also healthier and easier on the environment than beef. Plus there's that rising passion for local eating; what could be more local than deer? None of the American butcher-shop staples—cow, pig, chicken—are indigenous to the continent. Deer, on the other hand? Like eating out of our own national backyard.

In theory, anyway. In fact, Arby's had to source its venison from New Zealand, where there's a robust deer-farming industry; in the U.S., only 20 percent of the demand for venison is met by domestic supply. But yes, it's legal to raise deer here, and lots of farmers are doing it. Back in 2007 an analysis from Texas A&M found that cervid livestock—not just your deer but also your elk, your reindeer—was one of the fastest-growing industries in rural America; fresher stats peg its growth at 25 to 30 percent annually.

That said, waltzing into your local Taco Bell on any given day and ordering the whitetail fajitas remains a distant dream. Why? There's a catch-22 in play, applicable any time you find yourself wondering why we don't eat more [insert name of nonstandard meat here]. Taxpayers, vegetarian and carnivorous alike, foot the bill for USDA inspections of beef, pork and poultry. Farmers of other animals, though, from rabbits to goats to deer, have to dig into their own pockets to pay for inspection. Meanwhile, with demand for venison still relatively limited, lenders are leerier about fronting startup costs for deer farming, seeing it as a higher-risk venture. There are also cervid-specific expenses, such as the eight-foot-high (i.e., unjumpable) fencing required in most states.

Back up, you say: why the special fence requirement? That's owing to the fact that captive deer are at risk for chronic wasting disease, a fatal relative of mad-cow, and another obstacle to your aspirational deerburger. Conservationists worry CWD will spread from farmed deer to those outside the fence, decimating wild populations; a recent article in the magazine Petersen's Hunting referred to deer farming as a "ticking time bomb."

But here's where things get complicated. The captive deer the article focused on aren't raised for venison. They're raised as stock for private game preserves—an enormously lucrative part of this industry, and one with noisy detractors. Truly, the optics aren't great. A 2014 Indianapolis Star investigation, for instance, told of a stud deer named X-Factor, "the product of more than three decades of selective breeding," who'd been valued at a million, er, bucks owing to a set of antlers on his head too huge and heavy for his neck to easily support. Some might call this rack grotesque; others might call it the ultimate in above-fireplace decor. That's the dark side of the deer ranch, then: They're breeding elaborately antlered deer to be easy quarry for weekend warriors.

The odiousness of this whole setup has gained the wild deer powerful allies: so-called fair-chase hunters, represented by groups like the National Wildlife Federation, who've been fighting various state proposals to re-regulate deer as livestock, rather than wildlife. The NWF set is motivated by the obvious threat—can't hunt deer that've already dropped dead—but ties it to a bigger-picture point: that wildlife is a public trust that shouldn't be privatized.

This principle's been kicking around the hunting and fishing communities for more than a century, once championed by folks like Teddy Roosevelt. And the fair-chase hunters have successfully fought proposals to liberalize the deer industry in states like Tennessee and Missouri. It's a sweetly (if I may say it) un-American idea, this notion that some things are beyond buying and selling. Unfortunately for the fair-chasers, we're still in America. The future's not exactly on their side.