Why Oh Why Kiki? 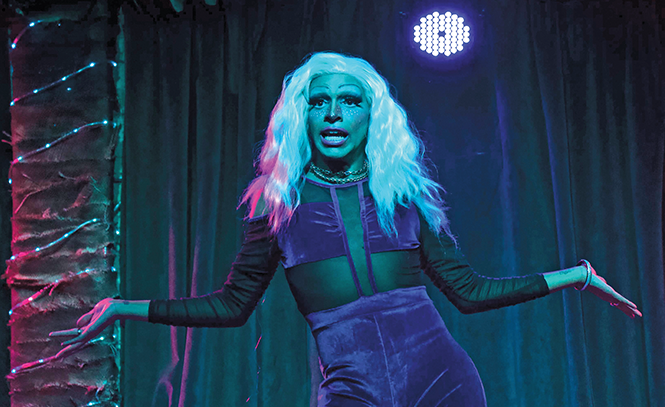 Walk under the bold pink sign into Why Kiki at 69 W. 100 South downtown, and this is probably what you'll see: a lot of people in costumes, drag queens swanning around glamorously and bartenders behind the island-themed bar dressed to the nines and shaking away at fluorescent drinks for a waiting crowd. Around the corner is the tall stage and watch area, and the rest of the bar is filled with nooks and crannies of private rooms, an entrance to the underground silent disco, two doorless and bustling gender-neutral bathrooms and a back patio over which sails a pirate ship, complete with a mermaid at the bow. At this new little downtown gem of a bar, the flavored rum flows freely, and you can be whoever you want to be—and no one knows it better than the local drag artists who perform there.

"I like that Why Kiki doesn't have a label. It's not a straight bar, but it's also not strictly an LGBTQ bar," says Lisa Dank, one of those local drag artists. "It's a bar for anyone who wants to be included and have a great time regardless of who you are and how you identify."

Another local drag queen, Sally Cone Slopes, shares these observations: "It's very close to the Salt Palace, which hosts people from around the world who are in town for a conference. Showing people the talent Salt Lake has to offer is an amazing experience. It also attracts people from all over the state."

Besides performing there, Sally Cone Slopes also partakes in the other fun features of the bar. "Being a themed bar with fun drinks and food definitely brings in people, but there is also a silent disco where you are able to listen to three DJs on one dance floor. You can easily find me down there after shows. It's too much fun to resist!"

There are many other bars and venues, of course, that host drag shows often, but the addition of a new one to the downtown nightlife scene only makes the community stronger and more diverse. Lisa Dank also appreciates the new crowd of people being exposed to the bar: "There's a lot of people that I've talked to at Why Kiki where it's their first time at a drag show, and I love that they get to see a show with a cast of very different talents. Drag queens, drag kings, burlesque performers, belly dancers ... every show really is so unique."

The way each show is decided, too, includes input from the performers themselves. "I love being able to express myself and how I'm feeling in the moment through my looks or songs of choice to perform to, and as performers we truly have free reign to do whatever we see fit for the stage at Why Kiki," says Lisa Dank. "I love a theme, and every Saturday they have a different night planned—which us performers have a lot of say in—and I think that's awesome."

While the performers help establish the themes for these Saturday Night Vibes events, each night wouldn't be a success without the participation of attendees. "From the crowd, to the bartenders, to the performers, it's such a diverse crowd of people," Lisa Dank explains. "For instance, Lady Facade (another Why Kiki resident performer) and myself hosted a goth night last month, and all walks of life came together to party and just have fun, whether they [were] from a 'goth background' or not. And it's like that every weekend, no matter what the theme is."

Sally Cone Slopes also points out that even though Why KiKi truly feels like it's a place for everyone, it also feels particularly comfortable for LGBTAIA+ community members. "A lot of bars may have a Pride flag, but it's very hard for the LGBTQIA+ community to feel welcome," she admits.

The bar also provides valuable opportunities for local drag artists to earn a consistent income and grow their audience. "It's the only bar that is located in a high traffic area that exposes drag on a weekly basis," Sally Cone Slopes adds. "It's nice for queer artists to have a steady income to continue [to] grow our art. It truly means so much—especially as a person of color in Salt Lake—having a platform to speak and show others my culture through drag. It's amazing and honestly healing!"

So, whether you go for the silent disco, the Saturday theme nights, the fish-bowl drinks, or just to see what it's all about, there really is something for everyone at Why Kiki. Other notable recurring events on their calendar include Weekend Warmup trivia nights and Drag Race watch parties on Thursdays, Techno Taco Tuesdays featuring the Telepath Collective and the Ursula Major-hosted Sunday Brunch Box featuring their famous "Chicks 'n Dicks" phallic take on chicken and waffles. Their next Saturday Night Vibe is on Nov. 6, and they keep the spooky season spirit alive with a Day of the Dead theme. Keep up with all things Why Kiki at @whykikibar on Instagram, or at whykikibar.com.