Be cautious of wildlife this summer 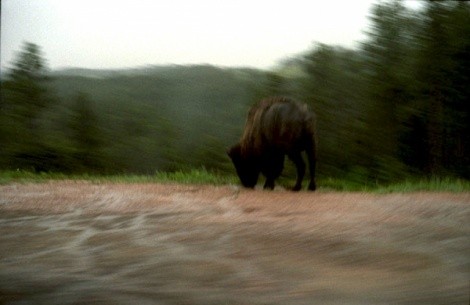 Finally, summer! Time to make up for all that missed hiking, bouldering, camping, mountain biking and other outdoor pleasures. But before you hit the woods, think about who you’ll be sharing it with: those who are cranky, unfriendly and often belligerent enough to attack you without warning.

And that doesn’t include humans. It’s the wildlife. This year’s weather could create dangerous situations for humans who wander into animal, reptile and insect habitat.

The unseasonable late cold and record snowpack left food sparse, which means many animals are hungry—and, like humans, animals are cranky when hungry. Deer, moose and even elk may be less cautious, more willing to move closer to well-traveled roads and campsites to get to tender tree shoots and plants. These particular animals aren’t very dangerous right now; they’ve already shed their horns, new ones are just starting to grow, and rutting season isn’t until autumn. But any large animal, if startled, may kick or bite.

Moose are calm and usually just stand quietly in a grove of trees, assessing what’s going on. Elk are huge and unpredictable, but usually will saunter away from humans. But deer are skittish. As the sun begins to go down, they’ll impulsively run out onto roads, drawn by headlights. If you’re driving through a forested area, slow down around curves. If you see one deer, moose or elk, there likely are many more, maybe even a herd. Bison also cross roads in herds; though these animals are slow and rarely attack, it’s still best to slow down while driving through their yards.

On a nice sunny day, you may see snakes sunning themselves on rocks or even lying out on a trail. Stay away from them and there’ll be no problems. But never put your hand where an unseen snake or a spider can bite. Don’t move a rock with your bare hand, don’t grab deadwood to build a fire, don’t put your hands into any dark or leaf-covered spot where a snake or spider may be hiding. Always take time to shake out your tent, backpack, sleeping bag and even shoes before using them—especially when putting shoes on in the morning.

Bears are a real danger right now—or, rather, humans are a real danger to them. They are hungry, busy teaching their cubs to survive, and very protective of those cubs. Bears have an amazing sense of smell, so never take strong-smelling items with you on a trip into the woods, even for just a day trip. Leave stuff like particularly aromatic food, deodorants, lotions and even toothpaste at home (use just a wet toothbrush).

If you see (or smell) a carcass, get outta there quick! A dead animal may do more than just attract other meat-eating animals; it may actually be a carnivore’s food supply, and the carnivore may be hiding just out of sight, ready to fight you for its dinner if you get too close. Cougars are dangerous to humans; they’ve killed humans who are just out for a jog. They’re predators that will often grab dogs from backyards or campsites for food.

If a dangerous animal starts chasing you—and that includes cougars or bears—don’t run away. It automatically brands you as prey. Face the animal and slowly back away, looking out of the corner of your eye for anything that may cause you to trip and fall down. If the animal continues to come closer, roar as loud as you can. But don’t look the animal in the eye; that translates as a direct challenge.

Remember that wildlife is just that—wild. Don’t attempt to approach or pet even a rabbit. In the wilderness, you’re in their home. Act like they do: Be aware, cautious and careful.

Get Out Get Out don’t