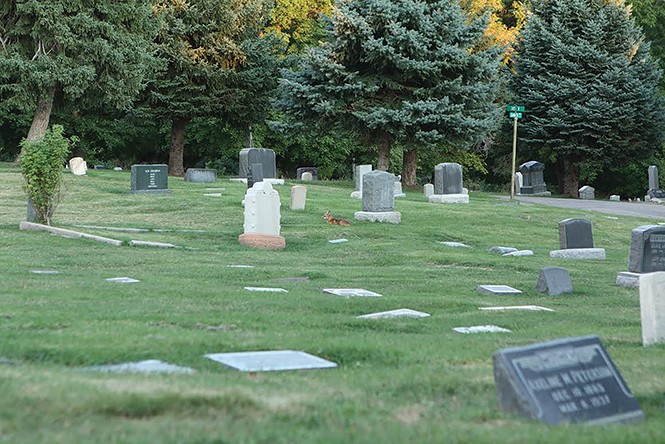 Zuni, who had lived at my parents' home since she was a kitten, was murdered by a raccoon several years ago. That's what the clues suggest, anyhow. My mom told me that the culprit had left a bloody paw print resembling a raccoon's next to Zuni's mangled corpse.

I spied a raccoon while I was living at home. I believe it is the same one.

Growing up in Spring Lake—a tiny farming community snuggling the mountain between Payson and Santaquin in Utah County—I learned the buffer that divides wildlife from civilization is thin. Once, a cat (maybe Zuni, though with six felines it's difficult to remember for sure) held a bleating weasel in its maw until my dad cornered the pet and, with a gloved hand, wrested the rodent free and then released it into the tall, yellowing grasses behind our home.

On another night, up too late, I looked out the large front room window and saw a furry creature scavenging for cat food on the long wooden porch. It was a coon. He looked back at me with his coal-dark eyes, then sniffed around for some morsels. Smart enough to know that the solid pane separating us was security enough, he didn't concern himself with the human on the other side. He, I suspect now, killed Zuni.

In spite of the family cat's fate, it's hard not to marvel at wild animals—to appreciate their hard-wired instincts and nimble adaptability. When a creature trespasses our roads and barns and fences, it's because those structures encroached on their natural habitat. After all, Spring Lake once belonged to the raccoons, owls, mule deer, rabbits and toads.

The intersection of human and animal is an inevitable tango in rural America, perhaps. But this mingling of species occurs in Utah's capital city, as well, where wildlife hides in our parks and on our perches, rummaging in garbage bins or slinking down from the untrammeled foothills looking for food.

Or, perhaps, to find a new home, as likely was the case when a mountain lion prowled through a Salt Lake City neighborhood early in the morning on Aug. 1. Around the age of 2, male cougars leave their mothers and seek out independent territory, says Riley Peck, wildlife program manager for the Utah Division of Wildlife Resources. "It's not uncommon for them to end up in a location that is not ideal," he adds.

This mountain lion had come within 6 feet of a city police officer before two bullets stopped it in its tracks, according to reports. Peck doubts the cougar was charging the police ("It's unlikely at any age," he says), but instead suspects it was trying to find a seam through which to escape. But he doesn't fault the cops for erring on the side of safety.

Most animals move to the city from the foothills in a less dramatic fashion.

As I was strolling through an Avenues cemetery one evening in May, an animal trotted across my path between oblong headstones. It was a red fox. I stopped and stared, and the fox stared back—fixed, cautious, it appeared, and not anxious to flee. She's got a baby, I thought. The next evening, I encountered a fox again. This time, her silhouette growled down at me from a small ridge. Her kit was near, around a bend. I watched it scamper away a few paces later.

Mark Smith, Salt Lake City Cemetery sexton, says the critters have roamed the cemetery off and on since he started work there in 1999.

"This year, we've got a number of foxes running around," he says, adding, "The deer are in here. During the winter, they're here more, but recently, these last few weeks, we've had a mother and a couple of fawns. We haven't had a moose in a couple of years, but on occasion, we've had moose."

Coyote have been known to frequent the cemetery, as well. When they do, Smith notes, the foxes vanish. Probably, he says, because they compete for the same food, and the larger coyotes bully them away.

Foxes dine on squirrels, chipmunks, mice and other small rodents and birds, which the cemetery has in spades. Peck says they refrain from preying on cats or dogs, but qualified his statement with a caveat: "Wildlife are unpredictable, so to say they would never, ever take a domestic animal would be misspeaking."

In a term biologists use, wildlife seek out "niche habitat," Peck explains, which is to say, a spot where all their needs are met: food, water, shelter, space and a sense of security. "The cemetery provides all of that," he says.

It allows the wildlife their autonomy. Smith says the wild fauna are welcomed by staff and visitors alike, and it's easy to see why the animals find solace among the dead. "We're open space," he says. "We're 150 acres of green, open space—of undeveloped space that they can come and basically settle in."

Smith and Peck aren't worried that greater exposure will lead to an influx of eager wildlife viewers, who could disturb the canines. "Nobody could hunt them or trap them in that area," Pack says. "And people know they're there."

It turns out, something else might be more deleterious than hordes of gawkers, anyway.

Recently, a friend and I laid out a blanket on a grassy patch to monitor the vixen. Before long, a dark-pelted animal crested up through a grove of trees less than 15 feet away.

A raccoon, I instantly but incorrectly thought. Low to the ground, the animal waddled leisurely away and then descended a dirt slope. It was a badger. With its big claws, it dug methodically into the ground and then backed down into the cavern it had just created. My friend saw a second badger moments later.

There were no foxes that evening. I wondered whether the badgers had scared them off.

In 2015, videographer Judy Lehmberg uploaded to YouTube footage shot in Yellowstone National Park of a clash between a badger and two adult foxes with a couple young kits. On film, the foxes' den is ransacked by a hostile badger. Try as she might, the mother wasn't able to keep the badger at bay while her mate was out hunting—and the intruder killed the pair of adolescent foxes.

Lehmberg says via email, however, that in more than 40 years of observing wildlife, this was the only time she'd witnessed a badger kill foxes.

Smith wasn't aware of the badgers in his cemetery, but he doesn't expect their presence spells doom for the foxes. And Peck says foxes and badgers are often observed sharing the same ecosystem.

The day after facing a badger, I made one more trip to the cemetery, walking up and down the old roads before stopping to rest. There, in an open grassy plot, a fox lay down 100 feet away. For five minutes, he sat content in the sun before skittering away past a bicyclist.