Say cheese: Learning the art of wine and food pairing. 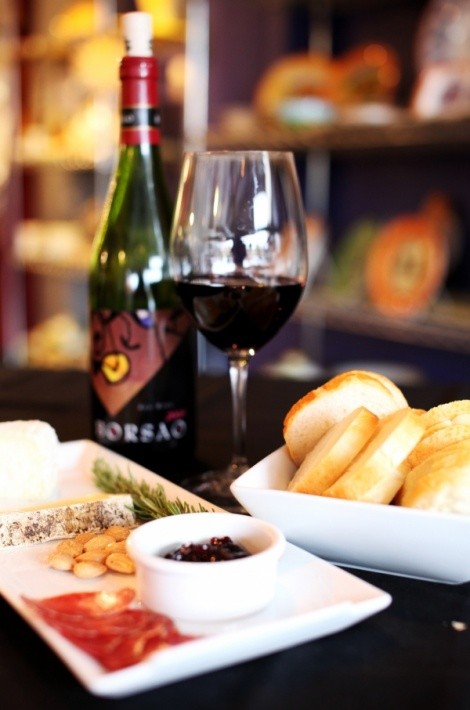 With the recent opening of Caputo’s on 15th, Tony Caputo and his crew has brought specialty foodstuffs to the east side, along with a new venue for Caputo’s most enjoyable food and wine-pairing classes. I’d been to cooking classes (and even taught a few myself) at Tony Caputo’s Market & Deli in the past, but somehow had never managed to get to one of the wine-pairing classes until earlier this month. What a blast! The classes—generally hosted by occasional City Weekly contributor Francis Fecteau of Libation, Inc.—are deliciously entertaining, as well as informative. And, you don’t go home hungry or thirsty. These fun, informal classes are a great bang for the buck, typically priced at $40 ($25 for the class/$15 for wine).

The French Cheese and Wine class I attended was a tag-team affair, taught by Caputo’s on 15th owner-partner and cheese guru Troy Petersen, along with Fecteau, whom Petersen appropriately refers to as “the Rain Man of wine.” As folks squeezed into the 30 seats around small tables at Caputo’s on 15th—the classes are frequently sellouts—Fecteau uncorked bottles and Petersen readied cheese plates.

First up, a decadent, triple-cream Brillat-Savarin cow cheese from fromagerie Delin, in France, was passed around, along with tasting glasses of Simonnet-Febvre Cremant de Bourgogne Pinot Noir ($18.99), a non-vintage bubbly from Burgundy using traditional Champenoise production methods. I usually like Viognier with Brillat-Savarin, but the Simonnet-Febvre turned out to work well, too. That wine was followed by Louis Latour Grand Ardeche Chardonay 2008 ($10.99). Fecteau calls this wine a “poor man’s Grand Cru,” since the grapes are grown from cuttings from the famous hill at Corton, from where wallet-busting wines such as Corton-Charlemagne Grand Cru come. Thanks to its high acidity, the Ardeche transitioned nicely right into the raw cow Tomme de Vache Basque, with its dark notes and hints of toasted almond.

If, like me, you tend to get into ruts and buy the same cheeses over and over—Reblochon, aged Gouda, Dry Jack and Morbier, for me—these classes can help open up your palate both to new wines and new cheeses. For example, I’ve never been a big fan of mouth-puckering goat cheese, but the Pyrenees raw goat Chabrin that Petersen introduced the class to was marvelous. I tend to drink Sauvignon Blanc with goat cheese but, again, the Grand Ardeche worked well here, too. And, so did an interesting Rosé wine: Bedrock Wine Co. “Ode to Lulu” Rosé of Mourvedre 2009 ($17.99). This is an intense, French-style Rosé, made from vineyard grapes that date back to 1888. We’re lucky to have this wine in the state, especially at about $5 below the national retail price. I really liked this wine with a second goat cheese: O’Banon French-style chevre from Indiana, of all places, named for Indiana Gov. Frank O’Banon, wrapped in bourbon-soaked chestnut leaves, which impart tannins.

More cheeses came, more cheeses went; Valencay from the Loire Valley, Fleur du Maquis from Corsica and so on. But, one of my favorite pairings was a stinky Camembert—with signature cooked-cabbage aromas—and Louis Latour Marsannay 2007 ($18.99). I’ve mostly had Gamay with Camembert, but this light, food-friendly Pinot Noir was versatile enough to enjoy with the smelly Camembert, as well as Epoisses Berthaut, with its burnt-pizza cheese flavors and even the sensational Papillon Roquefort Black Label. The latter—a powerful yet simultaneously subtle blue cheese—was simply wonderful with Chateau Saint-Roch Chimeres ($15.57) from the Cotes du Roussillon region.