More than one-third of the artists' works were created new for the exhibition.

It's that time of year—when local art galleries turn to holiday-themed shows. It's a wonderful opportunity to see large groups of artists exhibiting work together, and since galleries often have extended hours, it's ideal for people who might not otherwise get out into the gallery scene to get an eyeful of works by local artists and craftspeople.

But the very nature of the holiday show can indulge the stereotype: seasonal cards and knick-knacks designed to move as gifts that holiday shoppers can pick up in between visits to bustling mall stores. Of course, there's nothing wrong with art as a thoughtful, creative gift, but galleries need to avoid the trap of catering to the holiday gift-buying public in this over-commercialized season.

Phillips Gallery's Winter Group Show has always been a little different. The gallery's director/curator, Meri DeCaria, who has been working for the gallery for 25 years—half of the 50 years it's been in business—explains how the show, largely drawn from the gallery's extensive collection of local artists, is assembled. She asks artists to submit works, and, this year, she received several options from 30 of their artists. "When we laid it all out; they all seemed to find their places," she said. "It's a nice way to show that a wide variety of styles can hang together." More than a third of the works represented in the show is newly created for the show—a higher percentage than in previous years.

Though the presentation may appear to be completely intuitive or spontaneous, there is some method. The gallery alternates the number of works hung in a vertical column on the wall, and tries to group together works with similarities, like similar frames, or color schemes. "It's carefully arranged so it's harmonious," DeCaria said.

But then whimsical mixed-media pieces (including Maureen O'Hara's "A Lucky Life") appearing here and there add an element of surprise and keep things from becoming monotonous. "She delivered on the day of opening, so we squeezed hers in where we could," said DeCaria. "That's the way it goes; we are expecting that sort of thing will happen."

The serendipity with which the exhibit is arranged carries over into the viewer's experience. Walking around three floors of exhibits (not counting the permanent sculpture garden on the upper deck) and more than 90 artists on display, it somehow manages to feel comprehensive, but not overwhelming. This is largely because gallery owner Bonnie Phillips strives to keep the walls full without appearing cramped during this show, according to DeCaria. These works have space to breathe and maintain their integrity. Given this liberty, they can start to tell a story. 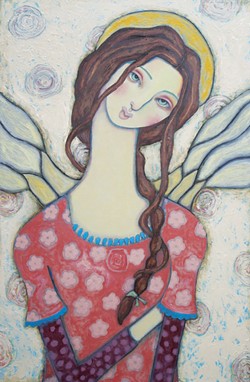 A few works refer directly to the time of year, like Patricia Kimball's "Play Pups" (oil) cavorting in the snow, or the religious symbolism of Heather Barron's "Angels" (oil), but the gallery avoids assigning specific themes to its artists. "We really like to let artists do what they're inspired to do, and we feel we get the best results that way," explains DeCaria.

These works engage in a vital conversation, both with the viewer and with each other: The landscape paintings of Connie Borup and Hadley Rampton can co-exist on the same wall with abstract works by Oonju Chun, Jean Arnold, Hyunmee Lee and Tom Bettin. The figurative works of Sandy Freckleton Gagon can be in the same room with sculptures by Claire Wilson and Cordell Taylor. These are all different perspectives of seeing the world in new ways and what one can make of it.

The exhibit is also a wonderful celebration of the gallery's half-century mark, with its mix of the old and new. Deborah Hake Brinkerhoff's new works are fresh and invigorating, while Tom Kass is new to the gallery. The former University of Utah architecture professor's work is influenced by his academic discipline. New works submitted by the family of the late sculptor Larry Elsner enhance his legacy. A number of artists in the exhibit have passed on, and it's fortunate to have their work preserved for display.

Phillips Gallery's winter group exhibit—opening during the time when autumn turns into winter, a time of endings and beginnings, looking back and looking forward—is a reminder of the way art, in general, and the local art scene in particular, are capable of remarkable rebirth and renewal. Looking at this show, art lovers are reminded of much to be thankful for in the local art scene. In addition to the sheer bounty of art, it's a celebration of the unity and diversity of the local arts community.