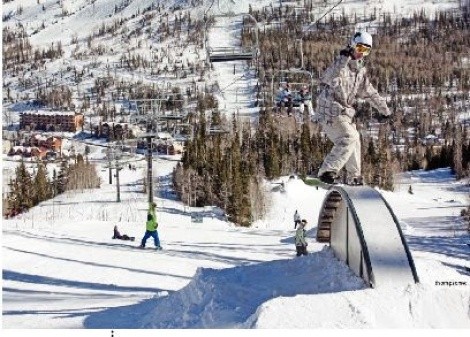 This is the time of year when outdoor enthusiasts along the Wasatch Front may develop a split personality. On the one hand, we want to continue to enjoy the snow in the mountains as long as we can. At the same time, we’re asking ourselves, “Isn’t winter over already?” and wanting to soak up some sun. Either way, we want to do it for a good price.

The opportunity to chase down the last gasps of winter while also embracing the coming spring can be experienced in the same getaway weekend in Southern Utah. In less than four hours, you can be at Brian Head Resort for a Friday night, followed by a day of skiing, snowboarding, tubing or snowmobiling on Saturday. Then on Sunday, it’s less than an hour drive down to St. George—or, for the more adventurous, less than three hours to Las Vegas—to partake in sun worship in all of its enjoyable varieties before driving home Sunday night.

For the winter half of the weekend, the prices are surprisingly affordable compared to what one would find on the Wasatch Front. Brian Head recently added to its list of accommodations with the Grand Lodge at Brian Head, which had its official opening in late February. The 110-room hotel has visions of becoming a four-star destination, and is well on its way with the opening of the Red Leaf Spa, just the second spa in the Brian Head area. They’ve also hired executive chef Robert Polk from Mandalay Bay in Las Vegas to develop a menu for the hotel’s signature restaurant, Leany’s Steakhouse, which includes dishes such as portobello mushroom fries with roasted garlic aioli or sherry-infused lobster ravioli.

However you spend your time indoors, Brian Head Resort—with its base sitting at 9,500 feet above sea level—has surprisingly affordable prices when it comes time to go outdoors. An adult day pass is $45, and night skiing from 4-9 p.m. on Fridays and Saturdays is $15, which also happens to be the same price of using the tubing hill. For those hauling kids along on their adventures, a children’s day pass is $32. Those just learning can try the package that includes a lift ticket, equipment rental and lunch to go along with a four-hour lesson, for $95—almost half the price charged by more northerly resorts.

Brian Head also sits near Dixie National Forest and Cedar Breaks National Monument and therefore offers some stunning vistas that can be reached by snowmobile. Thunder Mtn. Motorsports has guided tours through the trails of the backcountry areas ranging from 90 minutes to overnight.

The 90-minute ride goes for $85 per snowmobile and takes riders through everything from tree-lined forest trails to wide-open meadows where one can test the limits of a machine. The highlight is stopping on a cliff overlooking Cedar Breaks. You get off your machine, step into fresh, virgin powder, look down upon an amazing natural occurrence, feel the wind against your face, and ultimately feel like you’re in an ’80s music video.

If you get down south and find yourself missing any outdoor equipment or simply realize you need chains to make the drive back down the mountain, stop by Georg’s Ski Shop, where the owner—a member of the first family to live at Brian Head when it opened in 1965—will make fun of you for not knowing how to put on tire chains.

There are many cases in life where we can’t have our cake and eat it, too, but a drive down Interstate 15 at this time of year allows outdoor enthusiasts to enjoy sun and snow in one short trip. Sometimes, there’s nothing wrong with wanting to have it all.

Get Out Get Out