The language of music prevails 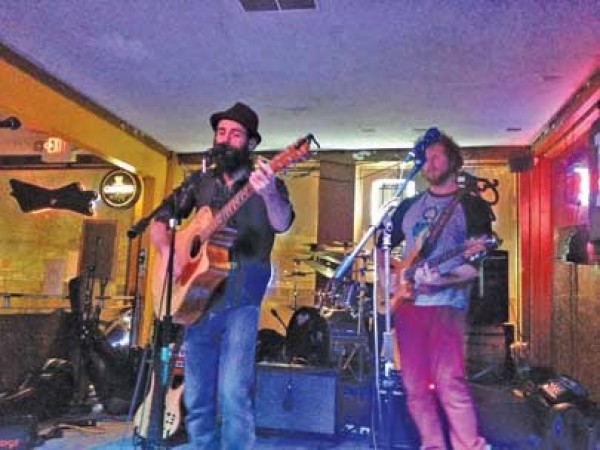 Not long into the night on any given Wednesday, guitar cases completely cover one wall of The Woodshed. No, it’s not a band equipped with more guitars than U2’s The Edge. For every guitar, there’s a musician ready to wail once his name is called.

With a microphone and sign-up sheet in hand, Jam Night co-organizer Jimmy Lauscher announces that, tonight, the list of performers is packed to capacity for all instruments—but that’s nothing new.

For a little more than a year, the neighborhood bar has invited musicians to crank it up through a professional P.A. system without any constraint on music genre. Week after week, the formula speaks for itself. The bar steadily becomes more populated until last call; in seemingly direct proportion, the jamming spirit onstage gets smoother and more fun as the night wears on.

“The idea,” Lauscher says, is simply “to get people together to create without expectations. Sometimes, they can make connections that just work and it becomes a ritual.”

Lauscher and Jam Night creator Todd Belcher are like proud parents when talking about how the night has matured from a fledgling idea to a hump-day staple. “It took hard work to get the consistency we needed, but we finally got consistency and the regular [musicians],” Belcher says. “They make the night.”

Belcher credits the dedicated regular players with courting additional musicians and a solid listenership. “People have discovered their favorite local musicians by coming [to Jam Night],” he says. “It’s a great way to get people together and make new connections,” adding that many area bands—such as Undeclared Millionaire—first started playing together at The Woodshed.

There’s a certain glue that makes the evening’s formula work. Lauscher, the guitarist for local blues-rock band Marinade, doubles as the guitarist in Jam Night’s house band, Music Glue. Belcher and Max Muscolino round out the lineup. Music Glue takes the stage around 9 p.m. to kick off the jam, demonstrate its format and get the crowd and players loose.

The goal is for “musicians to bond together and make something truly original,” Lauscher says.

Participants sign in on the roster by noting their name and instrument and are called up to the stage on a first-come-first-served basis. Often this system allows musicians to exchange ideas and licks with complete strangers. Bands can also sign up to play up to a three-song set.

The universal language of music prevails more often than not. Haphazard pairings give way to accidentally awesome performances—a group of players who take the stage for the first time together and sound like pros.

It all boils down to this: “The professionalism of the people who come and play here is really amazing,” Belcher says.

Not surprisingly, the expression of musical freedom beckons an eclectic and welcoming bunch. The irresistibly affordable drinks and an outdoor fireplace do their own fair share of enticing, but, on the dance floor, there is also a sense of camaraderie—as though the spirit of cohesion from the stage seeps throughout the venue. Whether the acts bring their own fans or the folks who attend are just that ideal open-minded type, the audience on Wednesday nights is far from a tough room.

Jam Night’s inclusiveness makes it an easy and infinitely more thrilling alternative to any home practice space. Just bring your own six-string (drums, amps and cables provided) and a willingness to hit the ground running. Jam Night will take care of the rest.